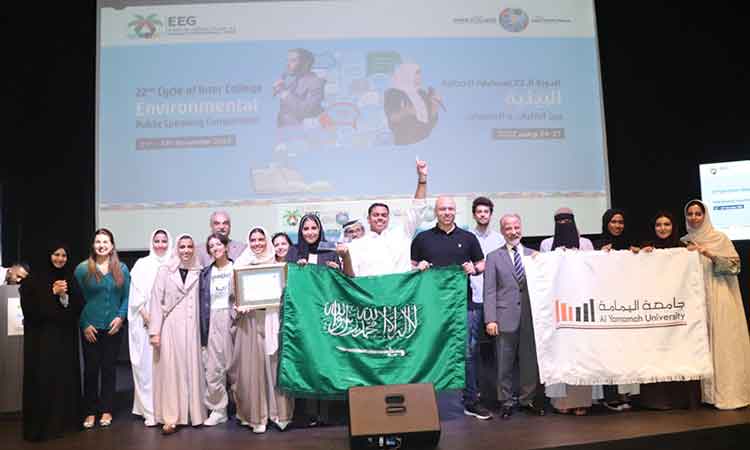 A regional inter-collegiate public speaking competition that encourages global responsibility over the environment is set to conquer the international stage as it fans out its wings in 2023 for other youth from across the world to have their voices heard.

On Friday and upon the announcement of the winners of the 22nd cycle of the annual Emirates Environmental Group (EEG) “Inter-College Environmental Speaking Competition,” co-founder and chairperson Habiba Al Mar’ashi told Gulf Today: “We are opening this competition in 2023 to colleges and universities all over the world on the occasion of COP28 (Conference of the Parties to the United Nations Framework Convention on Climate Change) that is taking place in the UAE.”

“We will reach out to all the continents and invite them to participate in this strong and unique intellectual platform. The decision was taken keeping in mind the convening of the summit and as the country will be receiving people from all regions of the world,” she added.

Early news reports indicated that the international summit that is expecting some 80,000 guests from other countries, shall be held at the Dubai Expo City, in time for the 52nd UAE National Day, as this shall start on November 30 and end on December 12, 2023.

On the concluded competitions that for the first time lasted for four days-November 21 to 24-at the Knowledge Park in Dubai, the topics debated upon and as rallied by the youth themselves, based on constant research by the EEG, were the correlation of water security and food security; the conservation of the true lungs of the planet (the tropical rainforests) for the prevention of the percolating climate change; industrial animal agriculture as the compelling contributor to climate change; and the increasing number of urban areas and the need for these to be re-designed to achieve net zero or the “balance between the amount of greenhouse gas produced and the amount removed from the atmosphere.”

The over-all winner, as they scored the highest points in the four selected topics, was the Al Yamamah University (Riyadh in Saudi Arabia).

The competitions began in 2021 that lasted for two days. This year, it was determined that this be extended to another two days to give the participants more space and time not only to express their views on the chosen topics and grasp and learn from these fully; but, most importantly, build friendships for possible future collaborations and partnerships.

“Our aim is to motivate the future generation in the region to have a clear understanding of contemporary environmental issues and share practical solutions for them,” Al Mar’ashi said, pointing out that it is vital for the youth to be led on the importance as well as significance of research critical thinking, leadership and networking for a lasting impact on the world.