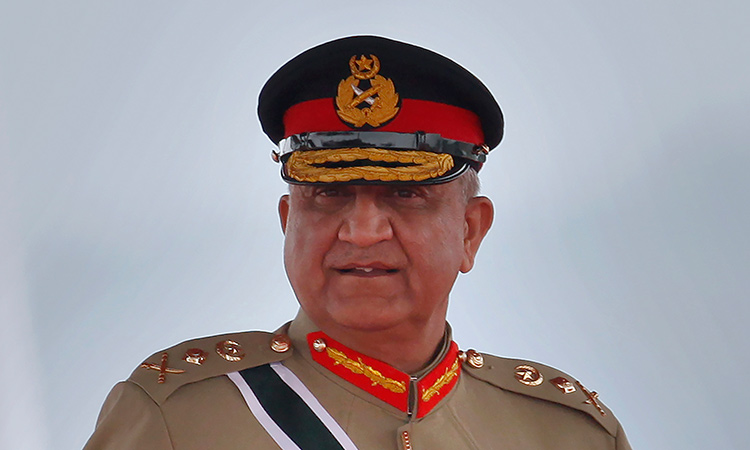 Pakistan's outgoing Army Chief General Qamar Javed Bajwa rejected on Wednesday as "fake and false" claims by ousted prime minister Imran Khan that a US-backed conspiracy had toppled his government, and also said the military would play no role in national politics in future.

Bajwa made his comments in one of his farewell addresses at the military's headquarters in the garrison city of Rawalpindi, which lies next to the capital Islamabad.

"You think that the armed forces would sit idly by if there were an external conspiracy in the country," Bajwa said, referring to Imran Khan's claim that the parliamentary confidence vote that ousted him in April was part of a US-backed plot.

The former premier has also alleged that the military played a role in his ousting, a charge the army has denied.

"A state of hysteria was created in the country on the pretext of a fake and false narrative," the army chief said about Imran's main accusation that Washington supported his removal with the help of a local handler. The United States has denied any involvement.

Over the weekend, Imran said that even if the military had not been involved it could still have saved his government.

Imran's party spokesman Fawad Chaudhry told Reuters he had no comment on the army chief's remarks.

Imran has been leading a massive protest campaign since his removal to demand snap polls and, according to political analysts, to put pressure on the government and the military to manipulate the selection of a new army chief in his favour.

Bajwa, who is due to retire on Nov.29, also said on Wednesday that the military had decided in February last year to quit any role in Pakistani politics, though analysts remain sceptical that it will do so. "I want to assure you that we're strictly binding on it, and will also abide by it in future," he said.

A process for Bajwa's replacement has already begun after the military on Wednesday sent a list of the six most senior lieutenant generals to Prime Minister Shahbaz Sharif for him to pick one.

"It will be decided no later than in a couple of days," a government official told Reuters.

This key appointment has never attracted so much jockeying, lobbying and controversy, analysts said.