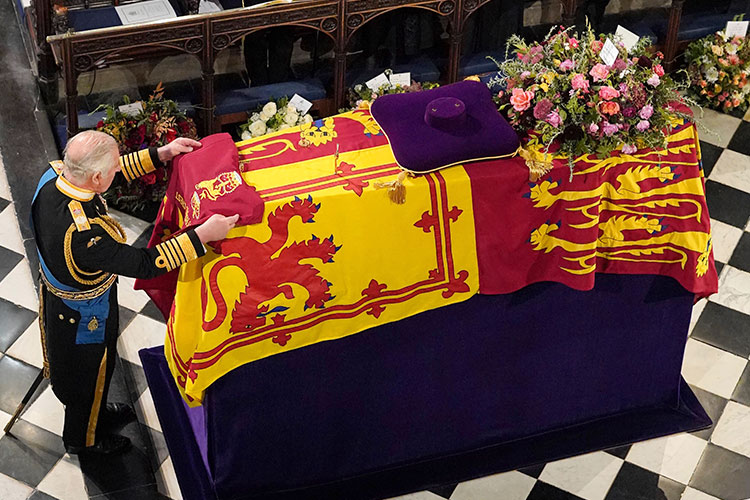 King Charles III places the Queen's Company Camp Colour of the Grenadier Guards on the coffin at the Committal Service at St George's Chapel in Windsor Castle. AP

Queen Elizabeth was laid to rest alongside her beloved husband on Monday after a day which saw Britain and the world pay a final farewell to the nation's longest-reigning monarch, in a dazzling show of pomp and ceremony.

Amid formality and careful choreography, there were moments of raw emotion. Late in the day an ashen-faced King Charles held back tears, while grief was etched on the faces of several members of the royal family.

Huge crowds thronged the streets of London and at Windsor Castle to witness the moving, grand processions and ceremonies.

"Few leaders receive the outpouring of love that we have seen," Justin Welby, the Archbishop of Canterbury, told the congregation at the state funeral in the majestic Westminster Abbey, where monarchs have been married, buried and crowned over the last 1,000 years.

Hundreds of thousands of well-wishers lined the route her hearse took from London, throwing flowers, cheering and clapping as it passed from the city to the English countryside that she so loved much.

Many more had crammed into the capital to witness the procession and funeral, in a moving tribute to Britain's longest-serving monarch who won global respect during 70 years on the throne.


Queen Elizabeth's Corgis watched the monarch's funeral procession pass by in the grounds of Windsor Castle.

The two dogs, Sandy and Muick, were also brought out for the arrival of the coffin at the castle, where Elizabeth was to be buried later in the day following a grand state funeral.

Well-wishers lined the route her hearse took from London, throwing flowers, cheering and clapping as it passed from the city to the English countryside that she so loved much.

Thousands more had crammed into the capital to witness the procession and funeral, in a fitting tribute to Britain's longest-serving monarch who won global respect during 70 years on the throne.

Inside the majestic Westminster Abbey where the funeral was held, some 500 presidents prime ministers, foreign royal family members and dignitaries, including Joe Biden of the United States, were among the 2,000 congregations.

Later the attention switched to St George's Chapel in Windsor Castle, where some 800 guests attended a committal service ahead of her burial.

It concludes with the crown, orb and sceptre — symbols of the monarch's power and governance — being removed from the coffin and placed on the altar.

The Lord Chamberlain, the most senior official in the royal household, then breaks his 'Wand of Office', signifying the end of his service to the sovereign, and places it on the casket.

In a tradition dating back to Queen Victoria's funeral in 1901, the state gun carriage bearing the coffin was hauled to the abbey by Royal Navy sailors, followed in a solemn procession by King Charles III and other senior royals.

Britain and the world say farewell to Queen Elizabeth II

A day packed with events in London and Windsor began early when the doors of 900-year-old Westminster Hall were closed to mourners after hundreds of thousands had filed in front of her flag-draped coffin. Many had waited for hours in line, including through cold nights, to see the lying in state in an outpouring of collective grief and respect.

"I felt like I had to come and pay my final respects to our majestic queen. She has done so much for us and just a little thank you really from the people,” said Tracy Dobson, who was among the last to join the line. 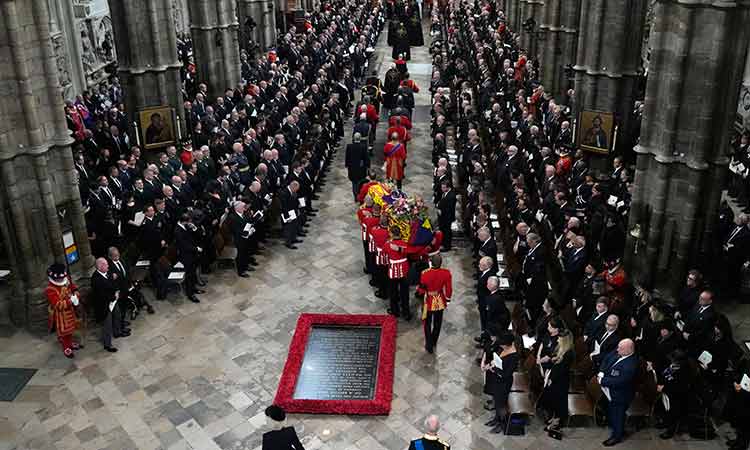 In a country known for pomp and pageantry, the first state funeral since Winston Churchill's was filled with the spectacular display: 142 Royal Navy sailors drew the gun carriage carrying Elizabeth’s coffin to Westminster Abbey, with King Charles III and his sons Princes William and Harry walking behind as pipers played. Pall bearers then carried the coffin into the Abbey, where around 2,000 people ranging from world leaders to health care workers and volunteers gathered to mourn her. Ahead of the service, one of the Abbey’s bells tolled 96 times - once a minute for each year of her life.

Monday has been declared a public holiday in honor of Elizabeth, who died Sept. 8 — and hundreds of thousands of people descended on central London to partake in the historic moment. Long before the service began, city authorities said viewing areas along the route of the funeral's procession were full.

Millions more were expected to tune into the funeral live on television, and crowds flocked to parks and public spaces across the U.K. to watch it on screens.

On the evening before, Charles issued a message of thanks to people in the U.K. and around the world, saying he and his wife Camilla, the queen consort, have been "moved beyond measure” by the large numbers of people who have turned out to pay their respects to the queen.

"As we all prepare to say our last farewell, I wanted simply to take this opportunity to say thank you to all those countless people who have been such a support and comfort to my family and myself in this time of grief,” he said. 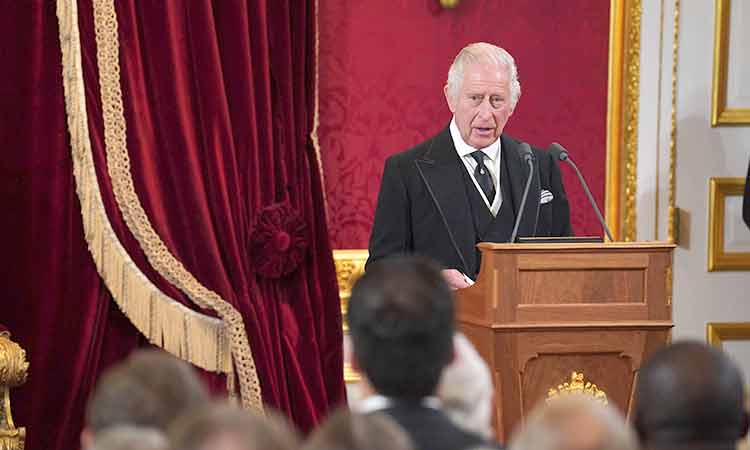 On Sunday, her oak coffin, draped in the Royal Standard of Scotland with a wreath on top, was taken by hearse on a six-hour journey from Balmoral through picturesque Scottish countryside, villages, small towns and cities to Edinburgh. 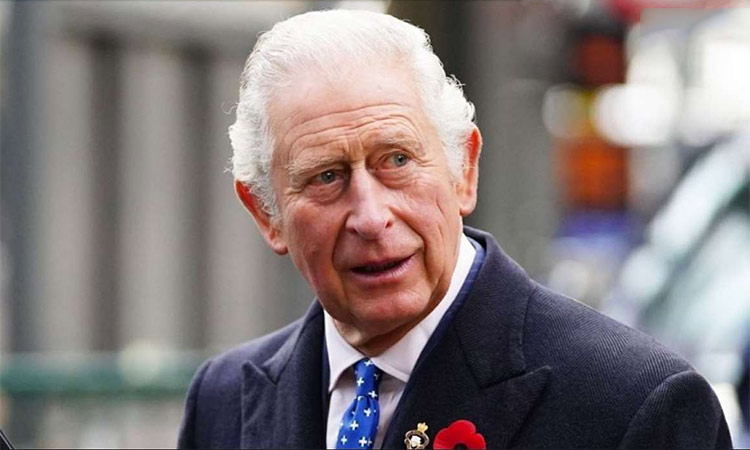 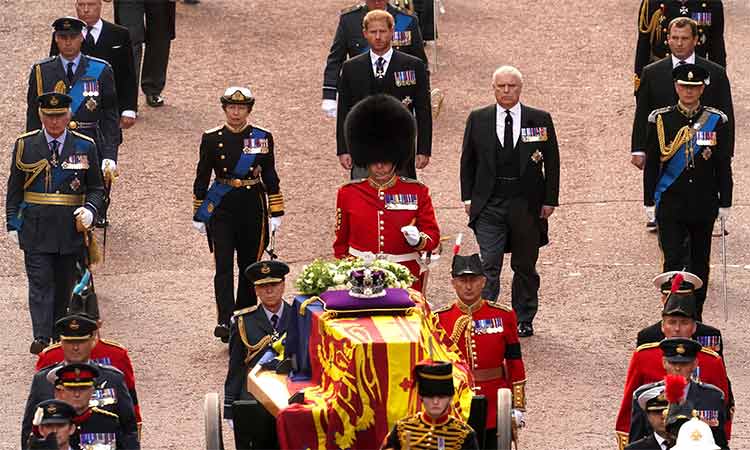