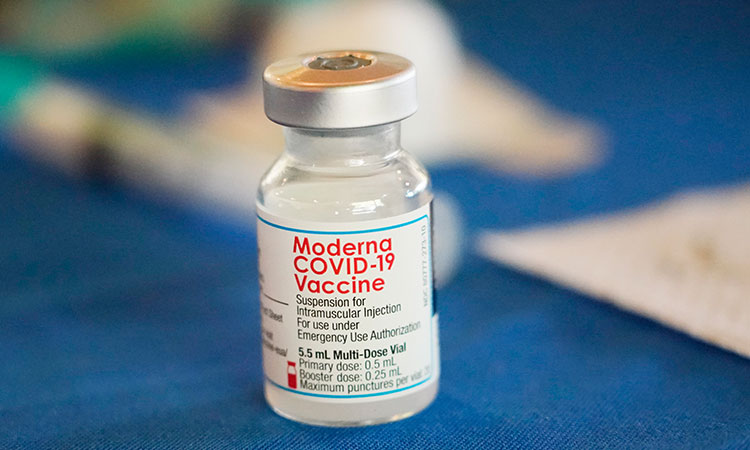 A vial of Moderna COVID-19 vaccine rests on a table at an inoculation station next to Jackson State University in Jackson. File / AP

Britain, the first country to approve a coronavirus vaccine in late 2020, has now also given the first green light to a variant-adapted shot that targets both the original and Omicron version of the virus.

The Medicine and Healthcare products Regulatory Agency (MHRA) said in a statement it had approved the vaccine for adult booster doses "after it was found to meet the UK regulator's standards of safety, quality and effectiveness."

It was the first such "bivalent" COVID-19 vaccine to be approved by the British regulator.

Britain's Joint Committee on Vaccination and Immunisation (JCVI) is now expected to soon issue a recommendation on how the vaccine should be deployed in the country.

The MHRA's chief executive June Raine said data from a clinical trial had shown it prompted a "strong immune response" against the original virus and Omicron and would provide a "sharpened tool in our armoury" as the virus kept evolving.

Moderna's CEO Stephane Bancel said in a statement that the US biotech company was "delighted" by the decision, "the first authorisation of an Omicron-containing bivalent vaccine."

While vaccines have helped lower hospitalisations and deaths from COVID-19, which first emerged in China in late 2019, the current jabs are mainly aimed at the earlier strains of the disease.

The World Health Organization warned in July that the pandemic was "nowhere near over," due to the spread of Omicron subvariants and to the lifting of control measures.

Half of the Moderna vaccine targets the original 2020 virus and half the Omicron variant, which is officially known as BA.1.

The MHRA said the vaccine was also found to generate a "good response" against two Omicron subvariants, BA.4 and BA.5, which have partly driven a wave of new cases of the disease in Europe and the United States.

The vaccine had the same "typically mild" side effects as the original Moderna jab, it added.

Moderna said in June that its "bivalent" vaccine performed better against both Omicron and the original virus compared to its original Covid vaccine, called Spikevax.

The EU's medicines watchdog said that month it had started to review the new shot. Moderna said it had also submitted the vaccine to regulators in Australia and Canada and was expecting further authorisation decisions in the coming weeks.

The European medical agency is also studying a rival adapted jab developed by Pfizer/BioNTech, which may be approved this autumn. The Pfizer/BioNTech jab is adapted for the BA.4 and BA.5 subvariants of the virus.

They were first discovered in South Africa and spread rapidly despite high population immunity conferred by prior waves and vaccinations.

Like other Omicron subvariants, they tend to have a milder disease course as they settle less in the lungs and more in the upper nasal passages, causing symptoms such as fever, tiredness and loss of smell.