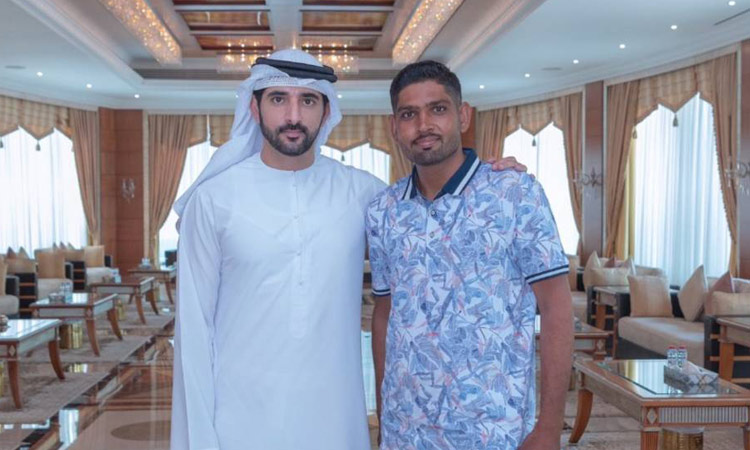 Sheikh Hamdan poses for a photograph with Abdul Ghafour in Dubai.

Sheikh Hamdan Bin Mohammed Bin Rashid Al Maktoum, Crown Prince of Dubai and Chairman of the Executive Council, posted a picture of him with the delivery bike rider named Abdul Ghafour, who became famous for removing two concrete blocks from a busy road in Dubai.

Sheikh Hamdan said he has set a really good example to follow.

Sheikh Hamdan said in a tweet, commenting on the photo of the meeting, “It is an honour to meet you, Abdul Ghafour. You are a real good example to follow.”

Sheikh Hamdan previously praised the biker's behavior after he appeared in a video while removing two concrete blocks that were in the middle of a road, asking the followers to help find the man, who was later identified and thanked for his act.


In the video, which he posted on his Instagram account, a biker is waiting at an intersection for the traffic to stop so he could remove it.

As soon as the traffic stopped the biker ran to the place and carried blocks and put them near the traffic lights.

As soon as he finished removing the two pieces, he returned and rode his bike and sped way.

On July 32, he wrote: "Doing good in Dubai is commendable... Can someone guide me to this man?"

Later, he announced that the delivery driver, Abdul Ghafour, had been found, thanked him for his behaviour, and promised to meet him soon.

Sheikh Hamdan regularly posts his pictures and videos on his social media accounts.

Social media users have praised the Pakistani national for risking his life in running traffic.

Abdul Majeed said on Facebook, “Plz Appreciate, what he did for the humanity in running traffic.”

Bu Khaled said, “This is UAE... These are our leaders…  We will meet you soon… Thank you Abdul Ghafur.”

Twitterati Padam Kafle said, “Am glad to see @HamdanMohammed you always Praises the good work and good people. Probably with the bike number, @Talabat can trace this great guy and post back in my opinion. May almighty bless you abundantly with happiness, wellness and good health His Highness.”

Dolly said, “Mr. Abdul, you are a real hero. But your action today shows that you have good upbringing by your parents. God Bless you for all the kind acts done in your life. You are a lucky individual because you will get to meet Sheikh Hamdan, I would love to be in your shoes this very min.”

Koshka said, “  Well done for not passing by, eliminated the obstacles that created a situation... this man deserves praise @HamdanMohammed, please reward him   , there would be more people who think not only about themselves.”

Soumya wrote on Twitter, “Hats off to this man for his simple but very important job. This kind of recognition from Hamdan, means a lot. I also would like to praise UAE leadership for their continuous encouragements for good job. This will also encourage others to perform more good work.”

Dex David said, “In all sentences, am impressed with the "we will meet soon!" it's echoes r endless. However I want to THANK also those that do good great acts for others comfort though not noticed in open eyes.” 

Alraka wrote on Twitter, “It might look pretentious to outside world, but this is what Dubai is made of, salute to its regular citizens and special appreciation for its ruling fraternity of leading this idea of great city of Dubai...”

Linda Mitchell said, “Small acts of kindness going the extra mile. Your a gentleman and your reward will beautiful to meet with HH what an honour.”

Liaz Mohamed said on Twitter, “ This is how good deeds should be rewarded by leaders, so others try and imitate good deeds. This eventually leads to creation of a good society.”

Maria Elena Barrient said, “A man who cares about the lives of others. God blesses him always…”

The sport-enthusiastic Crown Prince is an avid lover of nature and animals. 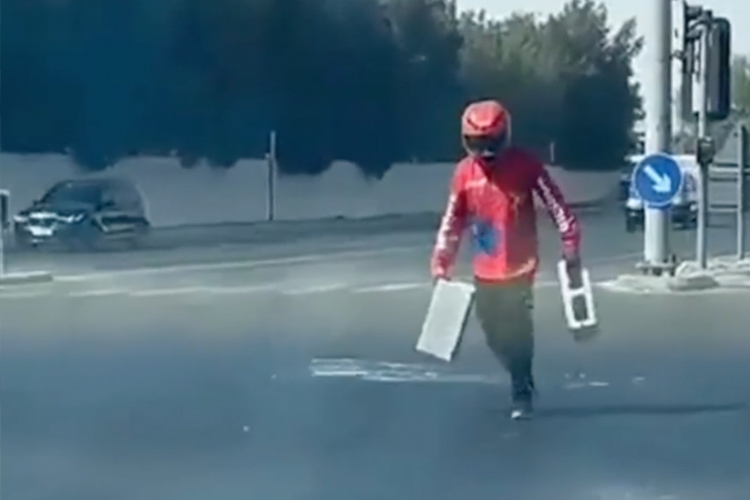 Sheikh Hamdan has praised the behaviour of a Talabat delivery biker who stopped to remove two pieces of concrete blocks that were in the middle of a road.