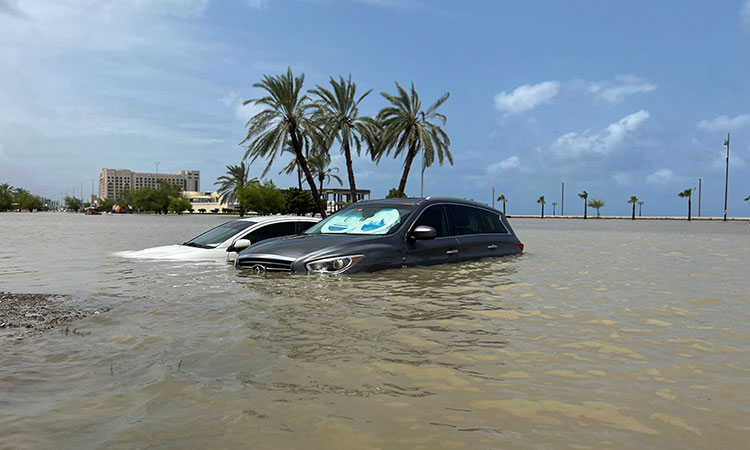 This photo shows a general view of a flooded street in Fujairah on Friday.

President Dr Arif Alvi and Prime Minister Shahbaz Sharif on Sunday expressed their grief and sorrow over the loss of lives, including Pakistani nationals, in flash floods that hit parts of the UAE.

The president expressed his condolences and prayed for the bereaved families to bear the losses with fortitude. He also prayed for the speedy recovery of injured people.

Expressing solidarity with the UAE in this difficult time, the president said that Pakistan was also facing such situation due to monsoon rainfall. The president also urged the international community to work closely to ward off impacts of the climate change.

Shahbaz also expressed his grief over the loss of precious lives. On his Twitter handle, the prime minister expressed his sympathies and condolences with the bereaved families.

The prime minister, in a related tweet, said that at this difficult time, Pakistan stood in solidarity with the people and the government of the UAE. He also directed the Pakistan Embassy in Abu Dhabi to extend full support to the affected families.

“We express our deepest sympathies to the families of the deceased and pray for the speediest recovery of those injured. Pakistan stands in solidarity with the fraternal people and Government of the United Arab Emirates,” it was added.

At least six dead due to UAE floods

The spokesperson further informed that the embassy of Pakistan in Abu Dhabi and the consulate general of Pakistan in Dubai were in contact with the UAE government and families of the affected Pakistani nationals.

The missions had been directed to closely co-ordinate with the local authorities to extend full support to Pakistani nationals affected during the floods.

According to media reports, the UAE recorded its highest amount of rainfall in 27 years, causing damages after flash floods hit its different parts.

Ras Al Khaimah, Sharjah and Fujairah, were the worst affected by floods that followed torrential rainfall.