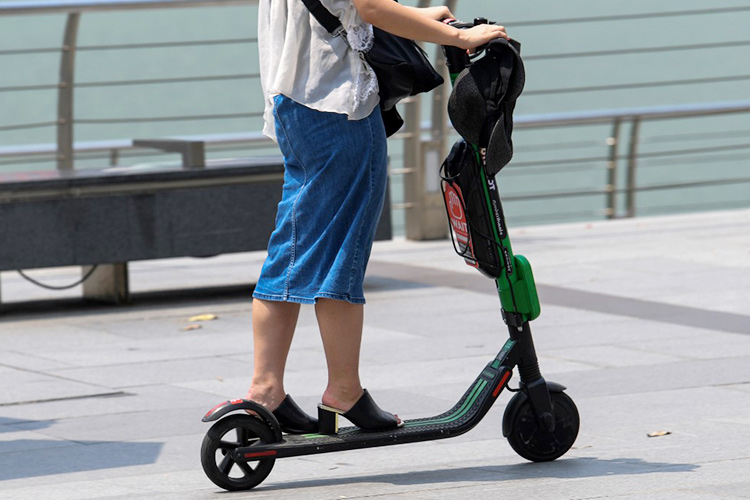 1. Failure to cycle or use your (the) bike in RTA's designated cycling paths. Dhs200

2. Cycling or using an electric bike on a road where the speed limit sign is more than 60 km/hour. Dhs300

3. Cycling in a reckless way that may endanger the life of the cyclist or others. Dhs300

4. Riding or leaving the bicycle on paths designated for walking or jogging. Dhs200

5. Using an electric scooter or any other type of bike specified by RTA without receiving a driving licence. Dhs200

6. Pillion riding (rider) on an unfitted bicycle or electric bike, or in case the cyclist and pillion rider doesn’t wear a jacket and helmet. Dhs200

9. Cycling without adhering to safety and security requirements specified in this resolution and its bylaws. Dhs200

10. Failure to meeting the technical requirements for bikes stipulated in this resolution and the decisions issued pursuant to it. Dhs300

11. Parking the bike in non-designated areas, or in a way that may interrupt traffic or pedestrian movement, or in a dangerous way for road users. Dhs200

12. Non-compliance with the instructions on the directional signs specified on the road and tracks. Dhs200

13. Solo cycling of kids below 12 years without adult supervision (older than 18 years). Dhs200

14. Not dismounting from the bike while crossing on pedestrian crossings. Dhs200

15. Failure to notify RTA, Police or Ambulance Services, without a valid reason, about incidents the cyclist caused or was a victim of, and resulted in injuries or material damages. Dhs300

16. Using the left side of the road while cycling or using the electric bike, and changing lane without ensuring its free. Dhs200

17. Cycling opposite to the direction of the traffic. Dhs200

18. Parking or driving a vehicle on cycle paths or attempting to disable the use of the cycle path. Dhs300

19. Towing the bike with a vehicle, or towing things with the bike. Dhs300

20. Failure to obtain group training license from RTA before training.  Dhs200 per person

Dubai Crown Prince and Chairman of The Executive Council of Dubai His Highness Sheikh Hamdan bin Mohammed bin Rashid Al Maktoum issued Executive Council Resolution No. (13) of 2022 regulating the use of bicycles and electric bikes and scooters in Dubai.

The Resolution supports Dubai’s efforts to transform itself into a bicycle-friendly city and promote environmentally friendly modes of transport. It also contributes to reducing road traffic congestion by encouraging the use of alternative means of transport, and promoting the public health of the community.

His Excellency Mattar Al Tayer, Director General, Chairman of the Board of Executive Directors of the Roads and Transport Authority (RTA), said; “The Resolution is aligned with the vision of His Highness Sheikh Mohammed bin Rashid Al Maktoum, Vice President and Prime Minister of the UAE and Ruler of Dubai, to raise living standards and promote sustainability in the emirate.

The Resolution is also part of the Dubai Crown Prince’s directives to introduce laws and regulations as well as strong safety and security measures to ensure bikers travelling across the city can ride without a worry.” “RTA has a comprehensive development plan for creating a large network of cycling tracks that links all key areas of Dubai.

The tracks, designed according to international best practices, seek to encourage people to use bicycles, electric-bikes and e-scooters as an eco-friendly form of transportation,” Al Tayer said. RTA’s responsibilities and functions As per the Resolution, RTA is in charge of the development, supervision and maintenance of cycling tracks.

It is also tasked with developing the guidelines that riders of bicycles, electric bikes and scooters, and any other type of micro-mobility vehicles specified by RTA need to follow to ensure safety. The RTA will also issue licenses for electric-scooters or any other form of bikes in accordance with the decisions issued by RTA’s Director-General, Chairman of the Board of Executive Directors.

Furthermore, the Authority is tasked with developing specifications regarding the use of bikes in Dubai and outlining the requirements for training on bikes in groups, in coordination with Dubai Police and relevant government entities including free zones and special development zones including the Dubai International Financial Centre.

Technical requirements The Resolution also stipulates that bikes should be fitted with a white head lamp in front and a red lamp and red reflector in the rear. They should also have a bell fitted on the steering wheel and brakes on the front and rear tyres. The tyres should be proportional to the size of the bike and fit for use on the roads and cycling tracks designated by RTA. The size of the bike used should also be proportional to the size of its rider.

According to the Resolution, cyclists (or bikers) should respect traffic regulations and ride their bikes only on RTA’s designated tracks. They should not ride electric scooters, or any other type of bikes as specified by the Authority (RTA) without receiving a permit (driving license permit). Electric scooters provided for rentals by companies or individuals should only be used in the areas and tracks designated for them by RTA. Riders of electric bikes and electric scooters should respect the speed limits set by the Authority.

Safety guidelines Cyclists should not use their bicycles on roads with a speed limit of more than 60km per hour, and cyclists and bikers should not use their bikes and e-scooters on jogging or walking tracks. They should refrain from cycling carelessly and abide by public safety requirements. Reckless practices that can endanger others’ lives and safety like hooking to a vehicle while biking are stringently not permitted.

One-handed cycling and biking should be strictly avoided except when riders need to use their hands for signalling. Reflective vests and helmets are a must for cyclists and bikers. Pillion (Carrying) riders are not permitted on bicycles and electric bikes unless the bikes have separate seats for them. Pillion riders or anything that causes an imbalance on an e-scooter is prohibited.

Pillion (carry) riders should also respect the safety requirements set by RTA. Bikers should ensure they maintain a safe distance from other vehicles and pedestrians. They should also ensure that the bikes are parked in designated parking spaces (if any). Parking in non-designated areas and causing obstructions to vehicles, pedestrians and users of public space is strictly prohibited.

In case of accidents that result in injuries or material damages, riders should report the incident to police and (or) RTA or ambulance services depending on the nature of the incident (unless they provide evidence for not being able to report). Cyclists and bikers should always ride on the right side of the road. Before changing their lane, they should give hand signals and ensure they can make their move safely.

It is the responsibility of all riders to ensure brakes and tyres of the bikes are in good condition, Flashing and steady lighting should be used as per RTA’s requirements. Bikes should not be towed by any vehicle and the bikes themselves should not be used to tow other objects. Making major modifications to the bike is also not permitted. Entities conducting group cycling training (for more than four cyclists) should ensure they have received RTA approval.

They should also ensure that they have notified Dubai Police, Dubai Sports Council, UAE Cycling Federation, and Dubai Corporation for Ambulance Services about the vehicles used to accompany cyclists to ensure their safety. Riders of these vehicles should be trained in accordance with RTA’s approved training programmes developed in coordination with the UAE Cycling Federation.

The safety vehicle should maintain a safe distance of 15 metres from the cyclists in case the cyclists ride at a speed of less (not more) than 30 km per hour. The training exercises should be recorded with front and rear video cameras. Minimum age for bikers According to the Resolution, cyclists below 12 years should be accompanied by an adult cyclist who is 18 years or older.

Riders below 16 years are not permitted to ride an electric bike or electric scooter or any other type of bike specified by RTA. A driving license is essential to ride electric scooters. Riding bikes or bicycles without receiving RTA’s approval, either for group training (more than four cyclists/bikers), or individual training (less than four), is strictly prohibited. Riders should always make sure they do not obstruct movement on cycling tracks Failure to adhere to laws and regulations governing cycling and biking or endangering the safety of other cyclists, vehicles and pedestrians can bring penalties and fines.

These can include confiscation of the bike for 30 days in case of repeat violations within a year of the first violation and bans on riding the bike for specific periods. In case the violation is committed by someone under the age of 18, his or her parent or legal guardian will be responsible for paying any fine.

Failure to pay the fine will lead to confiscation of the bike (similar to the regulation for confiscation of the vehicle). Fines and penalties The Resolution gives the police the power to control acts in violation of the law, in addition to RTA after coordinating with the police. RTA’s employees, who are granted judicial control by the Director General, Chairman of the Board of the Executive Directors of RTA, are also given the power to control acts committed in violation of the Resolution and decisions issued under it.

The Director General, Chairman of the Board of Executive Directors of RTA will issue the decisions necessary to implement this Resolution, which will be published in the Official Gazette. Resolution No. (13) of 2022 annuls resolution No. (10) of 2015 on regulating the use of bikes in Dubai, or any other decision that may contradict the new Resolution.

The administrative Decision No. (468) of 2019 on the technical requirements for bikes and cyclists will remain in place as far as it does not contradict the new Resolution and until a new decision replacing it is issued. The Resolution is effective from the date of its publication in the Official Gazette. 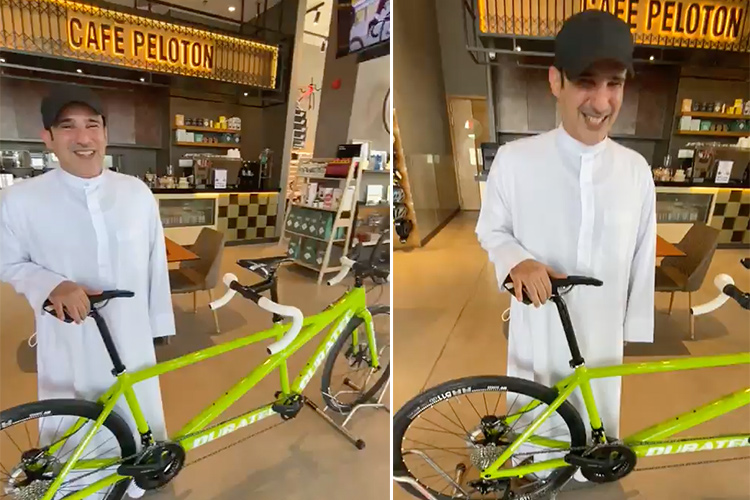 The Crown Prince of Dubai this time made a customised road bike and gifted it to Dr Ahmed Al Omran Al Shamsi, Chairman of the Advisory Council for People of Determination. 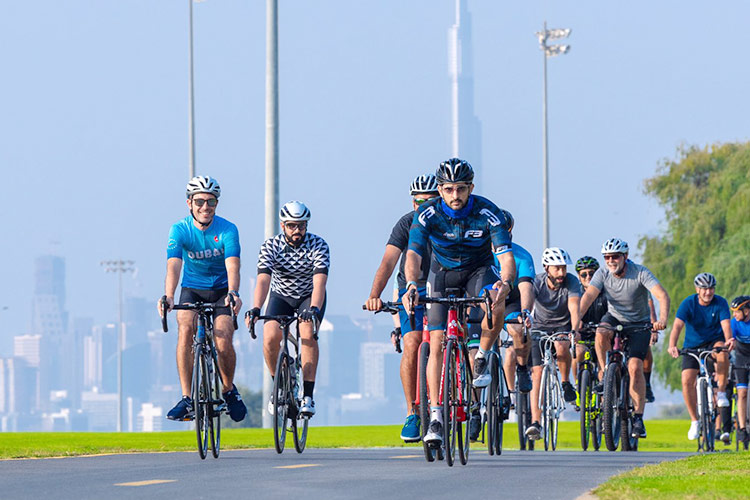 Sheikh Hamdan wrote on Twitter, “Today, I was pleased with the participation of a group of leaders of major international companies operating in Dubai on a bicycle tour as part of the Dubai Fitness Challenge at the Nad Al Sheba track.