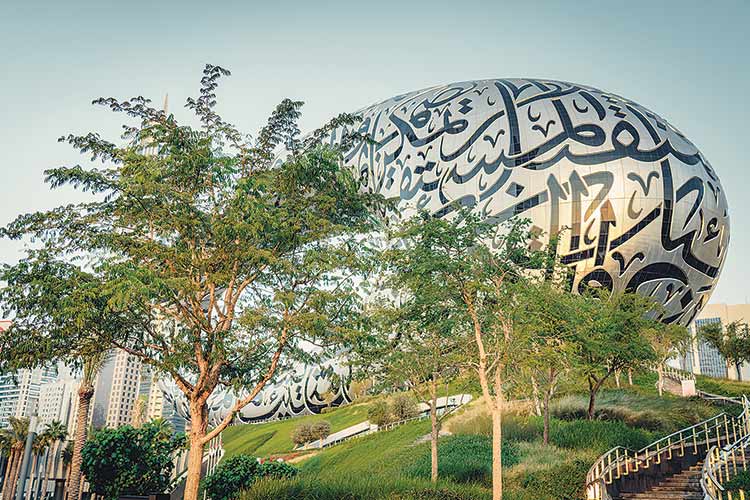 The Museum of the Future epitomises the country’s diverse natural ecosystem. WAM

Though the Museum of the Future in Dubai may be one of the UAE’s latest technological and architectural marvels, it also epitomises the country’s diverse natural ecosystem, which boasts a vast range of local flora, fauna, terrestrial and marine wildlife.

On first glance, one cannot help but notice the huge green plateau upon which the building stands. On closer inspection, guests discover that the hill is in fact a resplendent garden comprising around 100 species of trees and plants, reflecting the natural diversity that is an integral part of the UAE’s heritage.

Featuring ghaf, sidr, palm and acacia trees, which are well adapted to local environmental conditions, the garden is equipped with a smart, automated irrigation system and supports local bee and bird populations. The landscaping of the Museum was meticulously planned and planted to host these resilient native plant species that can adapt to the desert climate. These include bushy-leaved plants that normally grow naturally in the coastal areas of the Middle East. They are fast-growing, can tolerate hot climates and require minimal irrigation, making them ideal for the sustainable green hill that encircles the 77-metre building.

Like many of the Museum of the Future’s elements, its landscape is truly unique. The plant species and irrigation techniques used had to consider the nature of the steep plateau and the UAE’s dry weather. Given the unique setting of the building, traditional landscaping techniques were a challenge. A novel way of planting and soiling the greenery was needed.

With Dubai’s summer temperatures hitting close to 50 degrees Celsius, and with the average rainfall of 130mm per year, irrigation was one of the main considerations for the plateau. A smart irrigation system uses a sub-surface mat that delivers water directly to the root system in a targeted, efficient approach. The plateau’s steep slopes allow quick water run-off, removing the need for water-intense flood irrigation. The hill’s steep slopes allow for rapid water flow, eliminating the need for pumped irrigation. Additionally, water collection and recycling systems are used to reduce water wastage by approximately 25 percent.

PAST, PRESENT AND FUTURE: In the garden surrounding the Museum of the Future, one can see a mixture of past, present, and future elements represented, where the ghaf, sidr, palm and acacia species resemble the journey of a nation whose people gave and continue to give everything they could to elevate the nation’s global standing, while protecting and preserving its natural biodiversity.

THE GHAF TREE: The ghaf tree is one of the authentic and abundant trees in the UAE’s desert and is linked to the heritage and history of the region due to its importance in the lives of early humans living in the area. It holds great cultural value due to its association to the UAE’s identity. The ghaf tree can tolerate desert heat, drought, and lack of rain. It is a strong tree that can reach almost 30 metres in height with roots extending up to 50 metres underground. In 2019, the ghaf tree was selected to be a symbol for the UAE’s ‘Year of Tolerance’.

SIDR TREE: Sidr trees can be found across the UAE and can, to some extent, tolerate salinity, drought, and overgrazing. It is a tall, thorny tree, reaching about 12 metres in height. Sidr is an evergreen tree, but its leaves are shed once a year. Its roots are deep, strong, and intertwined.

PALM TREES: The relation between palm trees and the UAE’s history and its people is strong. The UAE’s leadership and people give much attention to this tree. The late Sheikh Zayed Bin Sultan Al Nahyan put palm trees at the centre of his agricultural and environmental project when he began laying the foundations of the young nation.

ACACIA: The acacia tree grows over sand dunes, rocky surfaces and at the bottom of muddy valleys. It avoids areas flooded with seasonal torrential waters. This tree can live in harsh climatic conditions and can endure low rainfall, down to 40mm a year, or heavier rainfall, up to 1,200mm a year. It can also tolerate drought and its roots extend up to 15 metres in sandy soil. 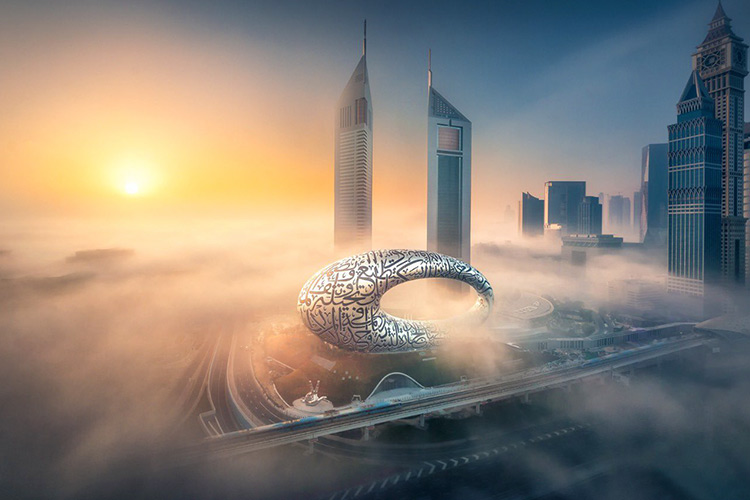 The settings and scenes that we are crafting are immersive, but also expansive: they are designed to expand what the audience thinks possible — for the world, for the future and for themselves. 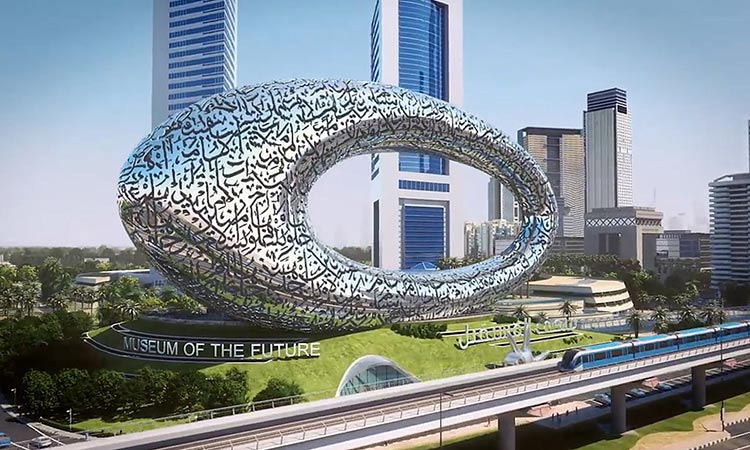 Dubai’s Museum of the Future’s tickets go on sale

Online bookings should be made before the preferred visiting time as each ticket holder will be allocated a specific timeslot during the museum's opening hours (from 10 a.m. - 6 p.m. all week long). 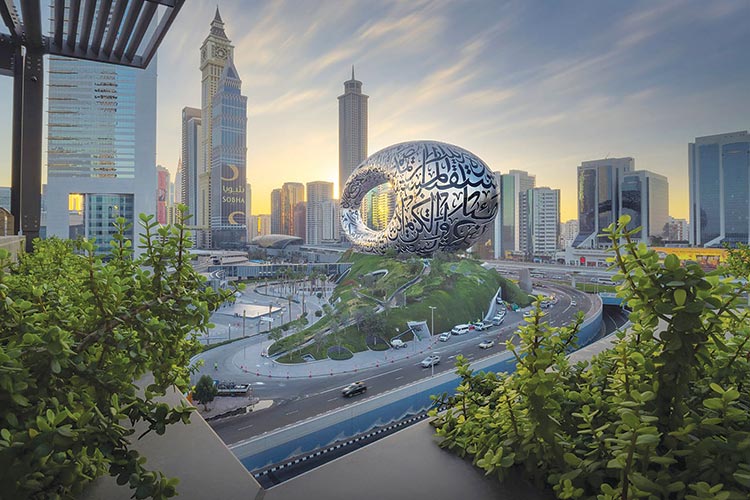 Museum of the Future, a new model of innovation

Often, we find ourselves wondering what the future could look like, envisioning an array of possibilities and questioning our own positioning in the world of tomorrow. What will our life look like? What will the future hold for our children? Today, the future is at the very doorstep of humanity, the opportunity is here as we believe that the future is something we ourselves can design.

Museum of the Future extends opening hours due to high demand

Tickets for the extended slots are now on sale and the new opening hours will be made available from Wednesday 30th November.