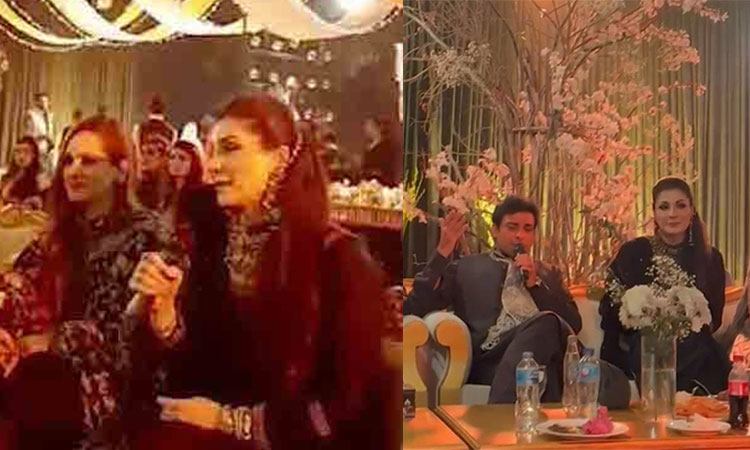 A screengran taken from the video.

"It was nice. This is how it normally happens in Pakistan. What is there to object to it? I think it's perfectly okay,” Maryam Nawaz remarked.

Maryam Nawaz and Hamza Shahbaz sang at one of the events held in Lahore a day ago and their videos have been circulating on social media.

In the video, Maryam can be seen playing popular Bollywood songs 'Chura Liya Hai Tum Ne Jo Dil Ko' “You stole the heart,” in the ceremony.

A day earlier, a video of PML-N leader Hamza Shahbaz started doing the rounds on social media in which he can be seen crooning a couple of songs at the wedding reception. 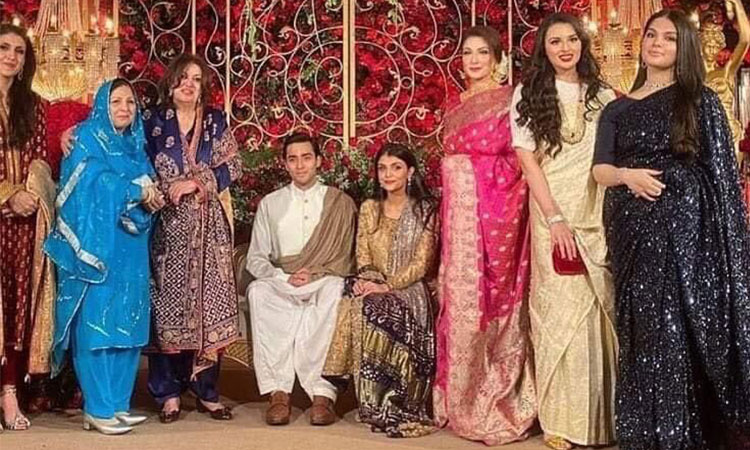 Mary Nawaz (third from L) with the bride and groom during the function. Twitter photo

The guests attending the event seemed to enjoy the song and lauded him for singing beautifully.

Maryam can be seen in the video sitting beside Hamza, while her husband Captain Safdar and PML-N spokesperson Marriyum Aurangzeb can also spotted.

Junaid Safdar had married Ayesha, daughter of former Ehtesab Bureau head Saifur Rehman, in London in August this year. However, his parents, Maryam Nawaz and Muhammad Safdar Awan had not attended the wedding as their name remain on the Exit Control List (ECL).

Months later, multiple events to celebrate the marriage are now being held in Pakistan.

Meanwhile, Information and Broadcasting Minister Fawad Chaudhry appreciated the two for singing. "We only have political differences with them, and our only objection is that they should not spend our money on wedding events. They should return our money."

In an apparent reference to Fawad Chaudhry's comments, Maryam Nawaz said that her son's wedding was a private family affair. "I, like all mothers, deserve a chance to celebrate the occasion without attracting political commentary. I humbly request the media and everyone else to respect the family’s right to privacy. Thank you," she said.

Long time ago, the singing video clips of deposed prime minister Nawaz Sharif and Shahbaz Sharif had also been available.