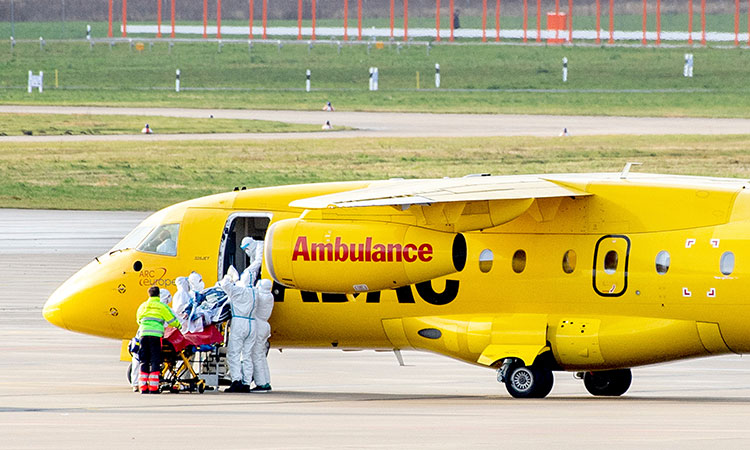 One of two virus patients is unloaded from a Dornier 328Jet ADAC aircraft at Hanover airport for transfer to hospital in Langenhagen, Germany, on Tuesday. AP

The World Health Organisation (WHO) on Tuesday urged countries to remain calm and take "rational" measures against the fast-spreading Omicron coronavirus variant, as Germany's next chancellor voiced support for compulsory vaccinations.

The emergence of Omicron, first reported to the World Health Organisation in South Africa less than a week ago, has already spread rapidly across the globe with borders shutting and dozens of countries rolling out travel restrictions in defiance of WHO advice. 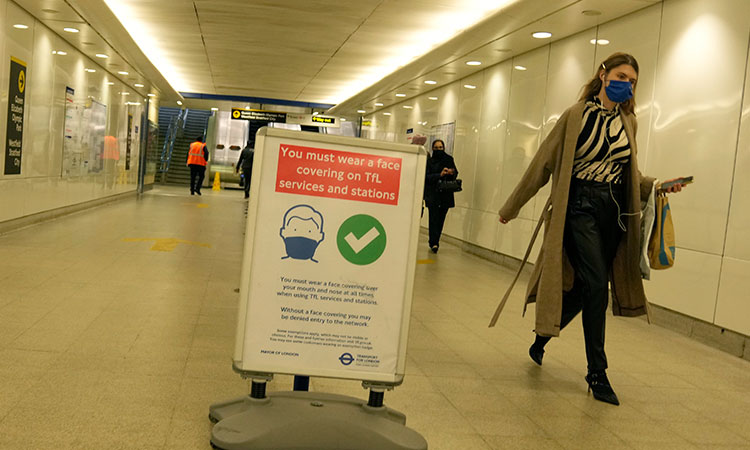 A commuter walks past a TFL information poster in London. AP

While so much is still unknown — no deaths have been reported from Omicron and it could take weeks to know how vaccine-resistant it could prove — the new strain underscores how besieged the world remains by COVID-19, nearly two years after the first cases. 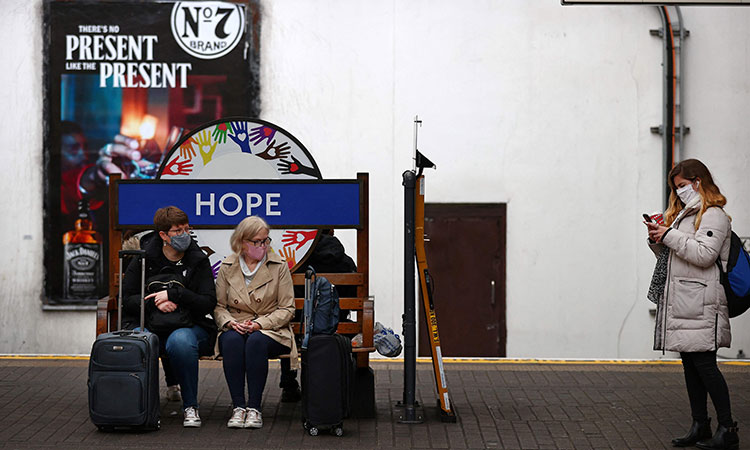 Passengers wait on the platform at Hammersmith underground station in west London. AFP

"We call on all member states to take rational, proportional risk-reduction measures," WHO chief Tedros Adhanom Ghebreyesus said in a briefing to countries. "The global response must be calm, coordinated and coherent."

The WHO chief said it was understandable that countries wanted to protect their citizens "against a variant that we don't yet fully understand," yet the UN health agency fears that blocking travel could be unfair and dissuade surveillance.

"I am equally concerned that several member states are introducing blunt, blanket measures that are not evidence-based or effective on their own, and which will only worsen inequities," said Tedros. 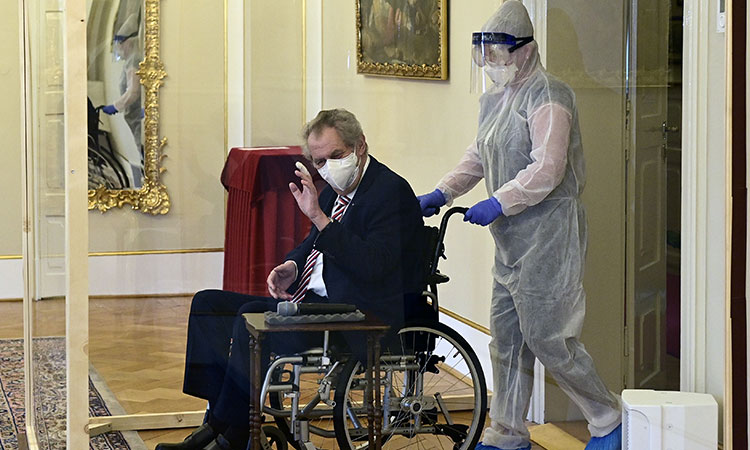 A health worker moves a patient to award in Germany.

In the European Union's largest economy, Germany's next chancellor Olaf Scholz indicated his support for compulsory Covid vaccines, with a source from his centre-left Social Democratic Party telling AFP he "signalled his sympathy for such a regulation."

Scholz held crisis talks with regional leaders and was due to meet outgoing Chancellor Angela Merkel over introducing new restrictions amid soaring coronavirus cases and hospitalisations.

Germany's constitutional court ruled that sweeping restrictions such as curfews, school closures and contact restrictions were lawful, likely to pave the way for further curbs. 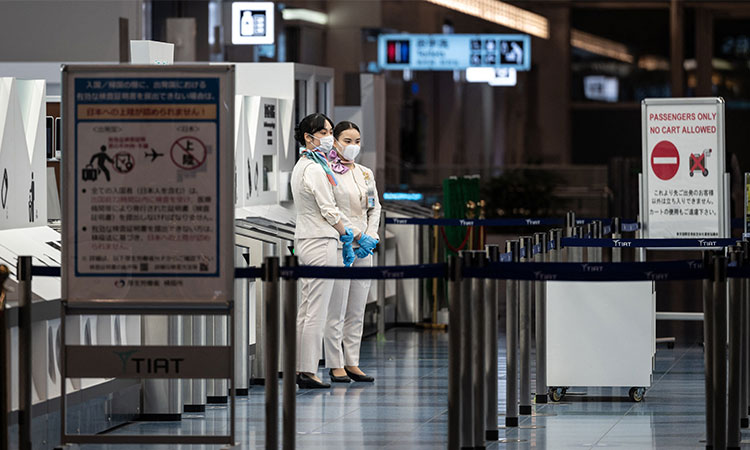 In neighbouring France, Health Minister Olivier Veran warned the situation was worsening rapidly after the first Omicron variant was found on the French island of Reunion, with 1,700 Covid patients now in critical care.

With 47,000 new cases reported over the past 24 hours, he said average daily cases are rising 60 percent a week. "If these trends continue, they could surpass the peak of the third wave by the end of this week," he told lawmakers, referring to the surge in cases last spring.

In the Netherlands, health authorities revealed the Omicron variant had already entered the Netherlands before a cluster of cases emerged from two flights from South Africa. 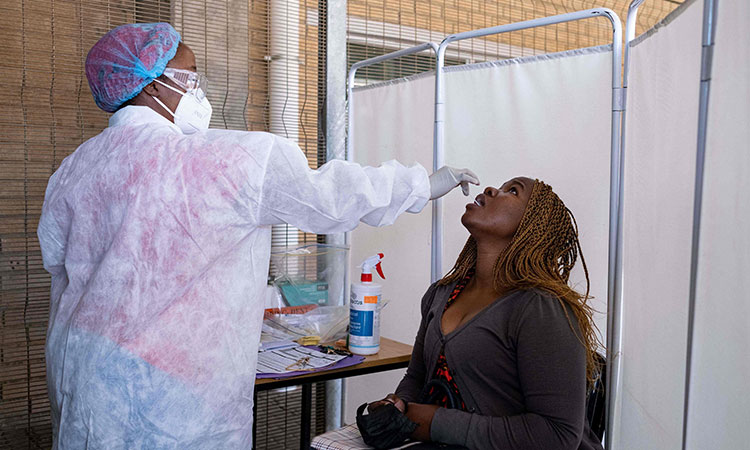 A healthcare worker conducts a PCR test at the Lancet laboratory in Johannesburg. AFP

Belgium and Germany have also reported finding Omicron cases before South Africa officially notified the WHO on November 24, while Japan confirmed its first case one day after barring all new foreign arrivals just weeks after relaxing tough regulations.

Markets in Asia, Frankfurt, London and Paris fell, while US markets and oil prices also tumbled after the boss of US vaccine manufacturer Moderna warned vaccines might be less effective at fighting the new variant.

'Not going to be good'

"All the scientists I've talked to ... are like 'this is not going to be good'," Moderna boss Stephane Bancel told the Financial Times, warning against a "material drop" in the effectiveness of current jabs against Omicron.

Moderna, US drug maker Pfizer and the backers of Russian vaccine Sputnik V have all announced they are already working on an Omicron-specific vaccine.

Scientists in South Africa said they had detected the new variant with at least 10 mutations, compared with three for Beta or two for Delta -- the strain that hit the global recovery and sent millions worldwide back into lockdown. 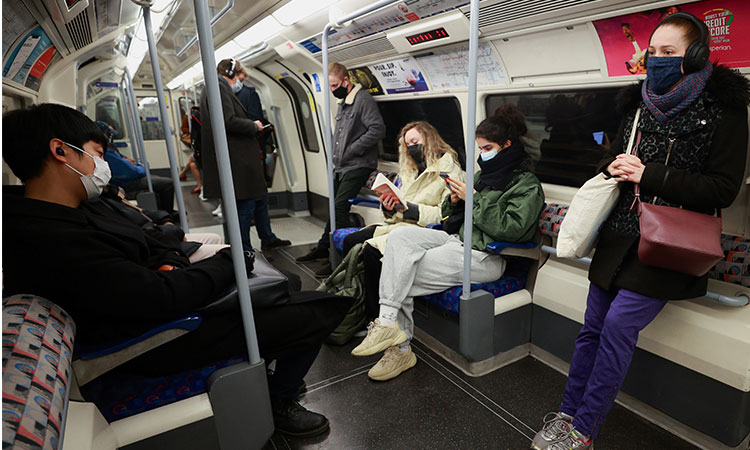 China warned Omicron would cause challenges in hosting next February's Winter Olympics in Beijing, with thousands of athletes, media and participants arriving from overseas required to enter a strict "closed-loop" bubble.

"But China has a lot of experience in responding to Covid-19," foreign ministry spokesman Zhao Lijian said. "I firmly believe the Winter Olympics will be conducted smoothly."

On Tuesday, Greece said coronavirus vaccines would be compulsory for over-60s, a day after Britain said all adults would be eligible for a third Covid jab.

Norway also said it would offer a booster shot to all adults before Easter, as preferable to lockdown.

And in Switzerland, ahead of what some had hoped would be a prosperous ski season, hoteliers said they were facing a wave of winter cancellations following quarantine restrictions being imposed on travellers from certain countries, including Britain.

The first confirmed case of the Omicron variant was in South Africa on November 9, with infections spreading rapidly in the country.