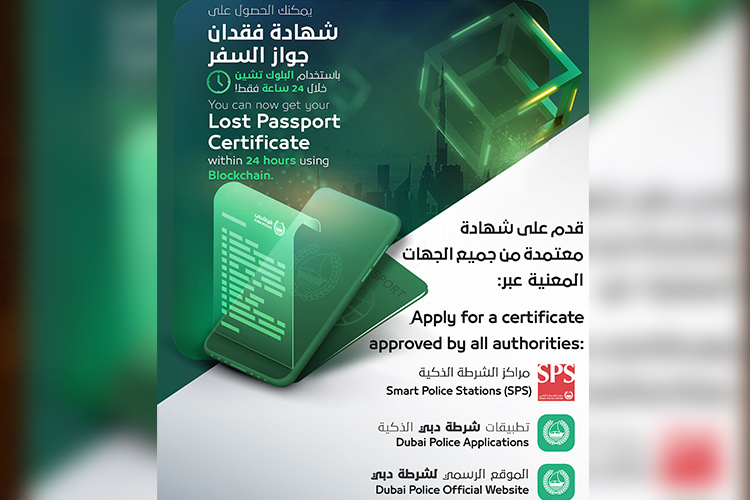 The new service enables customers to get the lost passport certificate quicker in three steps rather than eight.

Dubai Police are getting 'smarter and smarter,' so to speak. Where technology is concerned, they have learnt to be extremely savvy. They already have a smart robot who not only patrols the streets and reports crimes but also deals with customer queries.

Their smart police station is truly innovative. Now the force has gone one step ahead: they have issued 3,991 lost passport certificates since February using Blockchain technology. This platform interconnects Dubai Police with Dubai Courts, Dubai Public Prosecution and the General Directorate of Residency and Foreigners Affairs.

Now those who lose their passports can apply for a certificate to that effect, via email, and get the certificate very fast. They don't have to personally visit the service centres.

According to Brigadier Khalid Nasser Al Razooqi, Director General of the General Department of Artificial Intelligence at Dubai Police, the service dramatically cuts down on the time it takes to register a lost passport. Usually, it takes four days to get a certificate but the new service enables customers to get it quicker in three steps rather than eight.

“Customers can apply for a lost passport certificate via Dubai Police website, smart app or via a Smart Police Station (SPS). Alternatively, they can avail the service through the Blockchain-enabled service channels of the Dubai Public Prosecution, Dubai Courts and the General Directorate of Residency and Foreigners Affairs,” he said.

Brig. Al Razooqi explained that “unlike the previous service which required applicants to visit each of the participating entities before obtaining the certificate after four working days, the Blockchain-enabled service issues the certificate by email without the need to visit any service centres.”

The director-general of the General Department of Artificial Intelligence at Dubai Police underlined the force’s keenness to help offer simplified services to the community in line with the Emirates Blockchain Strategy 2021 that aims to capitalise on Blockchain technology to save time, effort and resources.