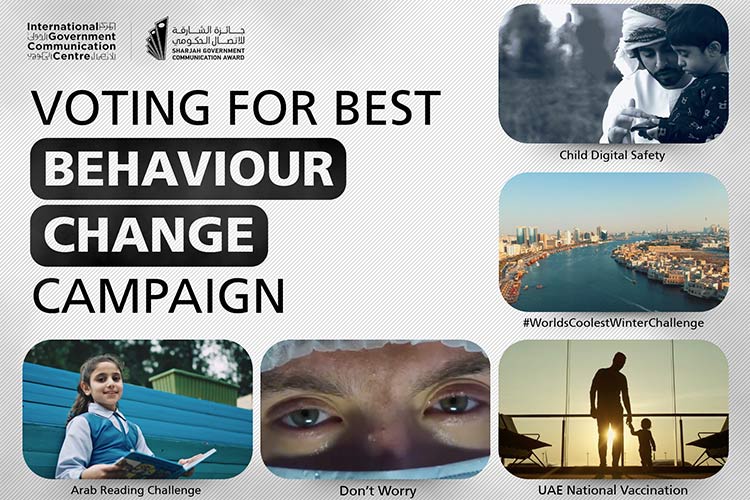 Five finalists have been chosen for the category. Voting for the finalists will remain open until August 2nd via the link https://www.igcc.ae/ar/events/sgca/voting.aspx--

The nominated campaigns include:

The inaugural 45-day, #WorldsCoolestWinterChallenge, launched by the UAE Government Media Office, to spur domestic tourism by encouraging the public to share creative images and short videos of their outdoor experiences in UAE.

The UAE Government Media Office’s Arab Reading Challenge, the largest-ever Arab literacy initiative, aimed to encourage students to read as many books as possible in one academic year.

“Child Digital Safety”, the UAE Ministry of Community Development’s campaign which is a joint programme of the Ministry of Interior and the National Programme for Happiness and Wellbeing, was launched on Emirati Children’s Day to help protect children from online threats by raising their awareness about safe internet use.

Don’t Worry, the seven-week national mental support campaign, launched by the National Programme for Happiness and Wellbeing, was rolled out through social media platforms to support members of society to overcome the psychological impact of the current COVID -19 challenge.

The National Emergency Crisis and Disaster Management Authority’s UAE National Vaccination campaign, was launched to highlight the importance of getting COVID-19 vaccine.

Tariq Saeed Allay, Director of Sharjah Government Media Bureau, said: “Over the years, SGCA has strengthened its position as an international platform to advance the culture and practise efficient communication and provide positive encouragement to all stakeholders in the development process. The ‘Best Community Impact Initiative – UAE’ category is particularly important because it is focused on elevating standards in government communication by engaging members of society in the process of shaping public campaigns.”

He added: “By voting to choose the most effective campaign, community members will utilise a key opportunity to participate in the UAE’s development process and contribute to influencing the formulation of government plans and programmes aimed at educating the public, generating awareness, and shaping opinion. I strongly urge all UAE residents and citizens to vote for their favourite campaign so that we are informed about communication strategies that are equally beneficial to both governments and the public.”

The Award, organised by IGCC and held under the patronage of His Highness Dr. Sheikh Sultan Bin Mohammed Al Qasimi, Supreme Council Member and Ruler of Sharjah, is a global platform to promote best practices in government communication.

Eman Bushulaibi: Eman Bushulaibi, Director of the Sharjah Public Library (SPL), has been elected to the Middle East and North Africa Regional Division Committee of the International Federation of Library Associations and Institutions (IFLA).

Bushulaibi will work directly with the other Regional Division Committee members to define advocacy priorities and build capacity across the region.

As Director of SPL, Eman Bushulaibi is mandated to oversee the design and implementation of the entity’s strategies. Her primary objective is to position the entity as not only a knowledge destination but also a unique hub where diverse communities can meet, learn and grow.

Passionate about building and nurturing organisations, Bushulaibi has succeeded in steering SPL to great heights over the past two years. She is credited with having facilitated 50 per cent organisational growth of the entity in just three months.