Palestinian man loses his entire family, in an instant: Miracle baby is sole survivor of Israeli airstrike that kills 10 - GulfToday

Palestinian man loses his entire family, in an instant: Miracle baby is sole survivor of Israeli airstrike that kills 10 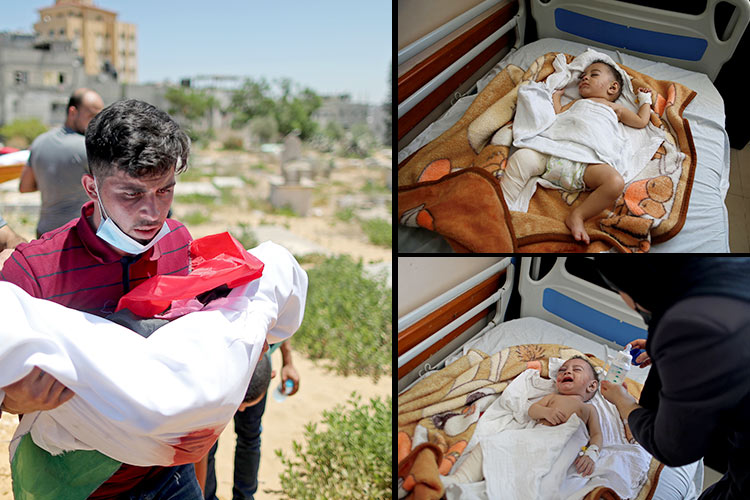 A man carries the body of a Palestinian child from Al-Hadidi family, left, Omar Al-Hadidi lies on a hospital bed. Reuters

The Hadidis were celebrating Eid but in an instant 10 members of the family were killed, including eight children.

The baby was found clutching his dead mother’s chest when the first responders in Gaza dug him out from underneath the rubble of a three-storey building.

In a split second 11 members of the Palestinian family, who had gathered for Eid, were buried by the giant claw of an Israeli airstrike.

The remains of the building in Gaza’s Shati refugee camp were strewn with children’s toys, a Monopoly board game and plates of uneaten food from the holiday gathering.

In total 10 were dead: eight children and their two mothers, who were sisters-in-law.

But by some miracle there was a cry: five-month-old Omar, the youngest, was alive. 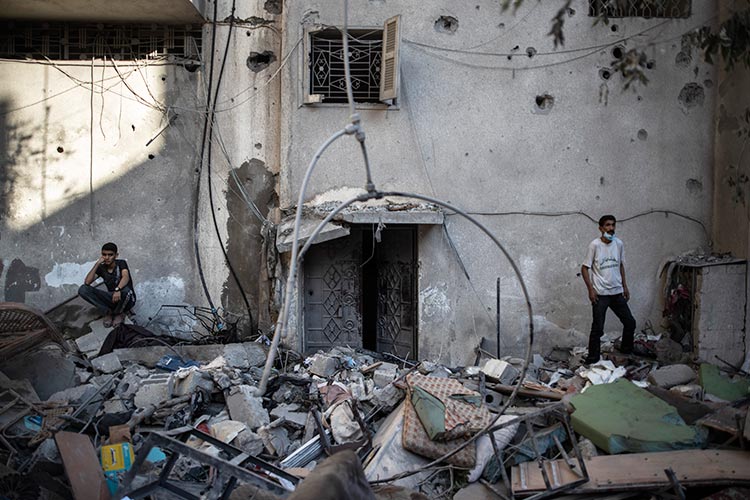 “What had they done to the Israelis to be targeted while wearing their special Eid clothes as they sat in their uncle’s house?” the distraught father Mohamed al-Hadidi, asked The Independent, from Shifa hospital where his son was being treated.

“They are only children, they haven’t fired rockets, ” he added, breaking down.

“Except Omar, I lost my entire family, in an instant.”

At least 139 Palestinians - including 39 children and 22 women - have been killed, mostly by Israeli airstrikes, according to Gaza’s health ministry.

But Mr Hadidi, who had not been with his wife and children, said his family knew nothing of the air raid which blew up their lives.

Under heavy bombardment, his wife Maha, 36, had taken her four children to her brother’s home to celebrate the Muslim holiday which marks the end of Ramadan.

After dinner with her sister-in-law, Yasmine Hassan, she decided to sleep there overnight, a decision that would ultimately prove fatal.

“The Israelis didn’t give any warning, they didn’t call them. They didn’t even fire drone [knock on the roof] rockets so they knew to escape,” the father said.

“My house is just 400m away, I was running in the street shouting, the building was totally destroyed.” 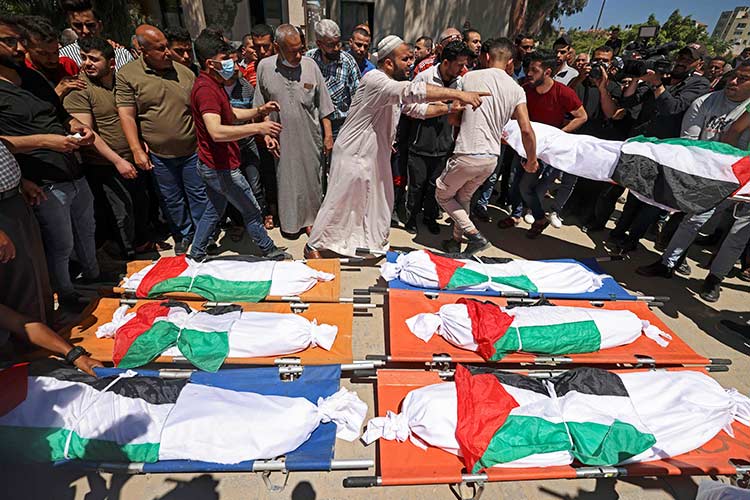 Palestinian mourners gather around bodies of members of the Abu Hatab and al-Hadidi families. AFP

Israeli warplanes have struck more than 650 targets, in an equally strong campaign.

Overnight on Friday Israel unleashed a 40-minute ferocious ground and air bombardment on Gaza, which the army said was targeting an underground network of attack tunnels they call the “metro”.

Military officials said that night they dropped 500 tonnes of munitions on the strip, which is home to nearly 2 million people.

“I have never seen anything like this in my life. It was worse than the 2014 war,” said, Hassan Mohammed Attar, 50, whose daughter, son-in-law, grandchildren and half a dozen neighbours were wiped out during that night’s bombardment along the northern border area.

“Everything has been destroyed, I have never seen such fire before spread through the houses. We were all suffocating, vomiting, I don’t know what that was,” he added.

The air raids were so intense on Friday and Saturday that thousands of Palestinians living near the border with Israel packed up their belongings and fled south, fearing a protected war and possible ground invasion.

“The air raids have been unimaginable, Friday was a night of fear, terror and destruction,” said Fareed Abu Haloup, 62, who spoke to The Independent as he was fleeing Beit Lahia in the north to the centre.

“We only just made it out of our house alive.  Even the ambulances can’t get to us. We can’t wait to see our children die in front of our eyes.”

Back at Shifa hospital, in Gaza City, Mr Hadidi sat playing with Omar, the only remaining member of his direct family.

“Where are our rights? We ask you to show the world what happened to us.”