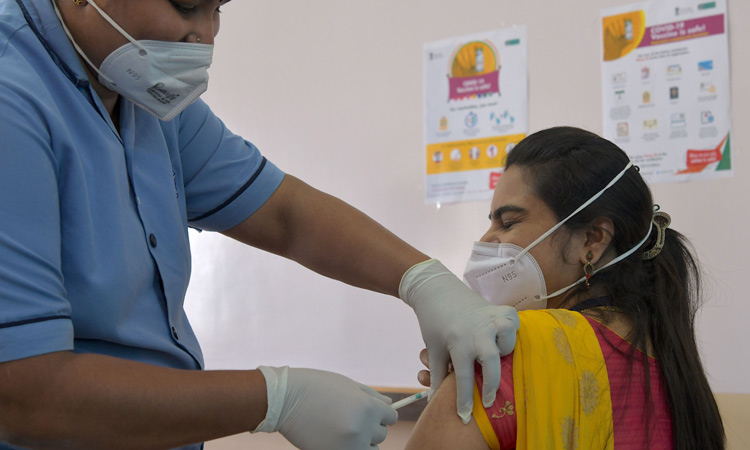 A woman receives a dose of coronavirus vaccine at a health centre in New Delhi. File

The chief executive of Serum Institute of India, the world’s largest maker of vaccines and a critical supplier of the UN-backed COVAX facility, asked President Joe Biden on Twitter to lift the US embargo on exporting raw materials needed to make the the jabs.

Vaccine makers and experts in India have been concerned that the use of the Defence Production Act by the US to boost their own vaccine production was resulting in exports of critical raw materials being stopped. This was hobbling vaccine production in other parts of the world.

Poonawalla had said the unavailability of the raw materials, such as the specific medium needed to grow microorganisms, would prevent Serum Institute from scaling up the production of the vaccine developed by Novavax.

The company had been planning to make up to 40 million shots of the vaccine monthly.

India battled a surge in cases as hospitals ran out of oxygen and beds, while politicians held election rallies and hundreds of thousands of Hindu devotees attended a weeks-long festival, infuriating health officials.

A massive second wave of infections, second only to the United States in total, forced authorities to restrict movement of people in Mumbai, New Delhi and other cities amid growing calls for faster vaccination rollouts.

The 217,353 new cases reported by the health ministry on Friday marked the eighth record daily increase in the last nine days and took the total number of cases to nearly 14.3 million.