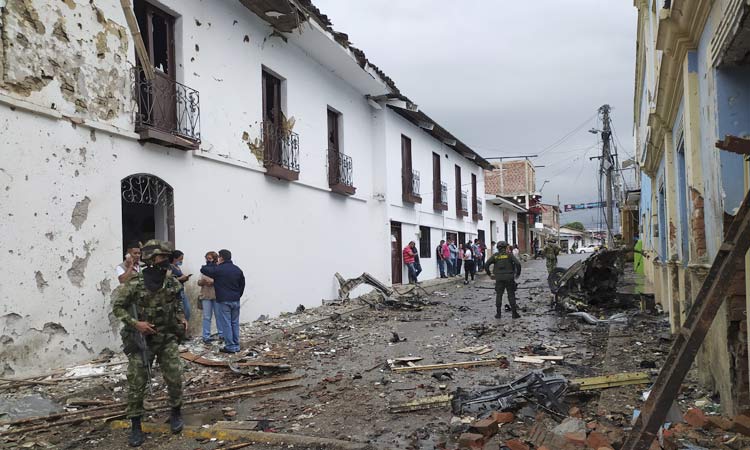 Soldiers and civilians stand outside the City Hall of Corinto, Colombia, after the explosion of a car bomb. AP

A car bomb exploded in a town in western Colombia on Friday, wounding 19 people amid an increase in violence in some of the country’s rural regions.

Officials said the blast went off in Corinto, a town of 30,000 people that has long been troubled by fighting between the Colombian army and rebel groups that traffic cocaine and hide in the nearby Andes Mountains. 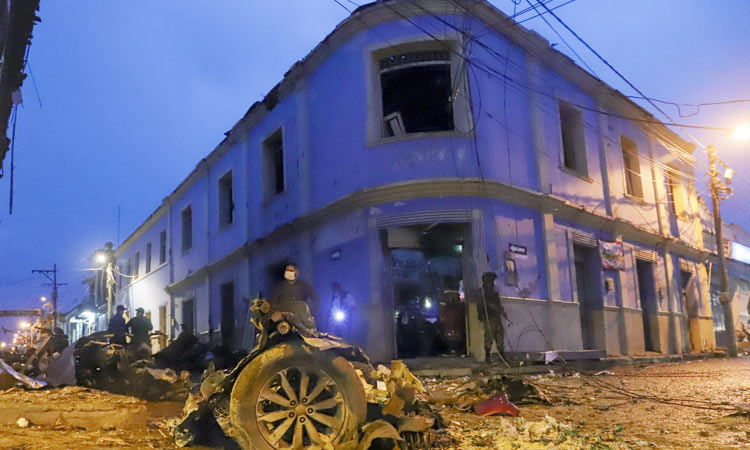 The wreckage of a car bomb that exploded outside City Hall litters the street in Corinto, Colombia. AP

Witnesses said the car bomb exploded near Corinto’s municipal government building and within walking distance of a police station. The town’s mayor was not in the building at the time, but three municipal employees were in critical condition and have been taken to hospitals in city of Cali, said deputy mayor Leonardo Rivera.

Despite a peace deal in 2016 between the government and Revolutionary Armed Forces of Colombia rebels, violence continues to affect some rural pockets of Colombia where splinter groups that did not join the peace deal and drug traffickers are fighting over cocaine routes and other resources abandoned by the FARC.

Rivera said Corinto had not seen any bombings since 2011, but community leaders in rural areas near the town have reported receiving threats recently. In 2019 a mayoral candidate in the nearby county of Suarez was murdered by members of a FARC splinter. Dozens of former FARC fighters living in the area have also been murdered or faced death threats.

Colombia’s defense minister said he was heading to the province of Cauca, where Corinto is located, for an emergency meeting with military and police officials.

“We will not stop fighting terrorism, wherever we find it,” President Iván Duque wrote on his Twitter account.