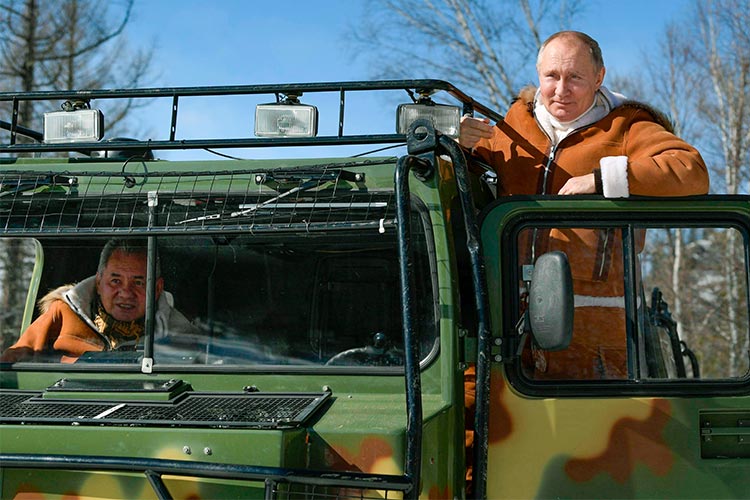 Vladimir Putin poses for a photo at a tracked all-terrain vehicle as Sergei Shoigu sits inside in a taiga forest in Russia's Siberian region. AP

The two men then visit a workshop in the snow forest.

Shoigu shows Putin the logs he used to cut during his spare time.

"The president is walking with Defence Minister Sergey Shoigu in Siberia,” the Kremlin commented in a brief statement, publishing about ten photos of this trip, without specifying where it was taken.

Several photos show the president and the minister in brown winter uniforms with white fur and traditional Russian shoes, eating at an outdoor wooden table, and then the two men drive a 4x4 vehicle. Putin is seen smiling in the driver's seat.

For years, the Russian president has been keen to present the image of a strong man, by constantly focusing on his physical fitness, and in recent years the Kremlin has published recordings of Putin in the Siberian forest, practising fishing, piloting a powerboat, and sunbathing bare-chested.

Videos have shown him diving in Lake Baikal, driving a Fomula One car, flying in a warplane, or fighting a tiger.

The announcement came in the Kremlin’s readout of Putin’s phone call with Tajikistan's president. Putin has been fully vaccinated with the Russian coronavirus vaccine Sputnik V, receiving his second shot in April.