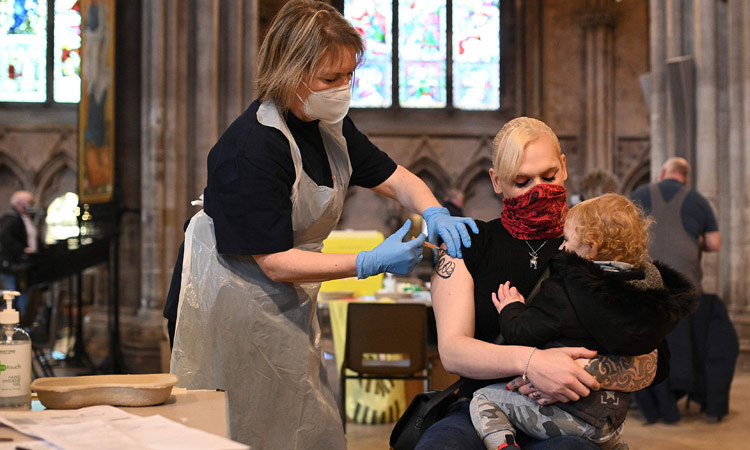 A woman receives a dose of the AstraZeneca vaccine at Lichfield cathedral, central England, on Thursday. AFP

The European Union's (EU) drug regulatory agency said on Thursday that the AstraZeneca vaccine doesn't increase the overall incidence of blood clots and that the benefits of using it outweigh the possible risks, paving the way for European countries to resume dispensing the shots.

Several European nations, including Germany, France, Italy and Spain, had suspended their use of the vaccine over the past week following reports of clots in a few dozen of the millions of people across the continent who have gotten the shot. The question was whether the vaccine had anything to do with those clots.

European Medicines Agency (EMA) director Emer Cooke said the watchdog could not definitively rule out a link between blood clot incidents and the vaccine in its investigation into 30 cases of a rare blood clotting condition.

But she said the "clear" conclusion of the review was that the benefits in protecting people from the risk of death or hospitalisation outweighs the possible risks. The issue deserves further analysis, the EMA said. "This is a safe and effective vaccine," Cooke told a briefing.

The agency will, however, update its guidance to include an explanation for the patient about the potential risks and in information for healthcare professionals, she said. "If it were me, I would be vaccinated tomorrow," Cooke said.

The EMA has been under growing pressure to clear up safety concerns after a small number of reports in recent weeks of bleeding, blood clots and low platelet counts in people who have received the shot.

The suspensions were the latest blow to the European Union's inoculation campaign, which has lagged the United States and former EU member Britain.

Italian Premier Mario Draghi welcomed the finding by a committee of the European Medicines Agency and immediately announced Italy would resume administering AztraZeneca's vaccine as early as Friday.

Germany will resume vaccinations with AstraZeneca’s COVID-19 jabs from Friday, Health Minister Jens Spahn said, after the European regulator EMA assessed it was "safe and effective" to use.

"The common aim of the federal government and all 16 states is for vaccinations with AstraZeneca to start again already tomorrow," said Spahn.

Spain said  it will resume its Covid-19 inoculation campaign with the AstraZeneca vaccine next week, after the EU's drug regulator deemed the jab "safe and effective.”

Health Minister Carolina Darias told a news conference that Spain will start using the vaccine again "next week, namely Wednesday".
Many governments have said the decision to pause inoculations was out of an abundance of caution. But experts have said political interference could undermine public confidence in vaccinations as governments struggle to tame more infectious variants.

Some scientists said the agency's endorsement should be enough to allay EU governments' concerns.

"I hope that any concerns about potential links between the Oxford-AstraZeneca COVID-19 vaccine can now be discarded given the positive verdicts delivered by the EMA, the WHO and the MHRA," said Royal Pharmaceutical Society Chief Scientist Professor Gino Martini.

The AstraZeneca shot was developed with Oxford University, and Oxford's vaccine trial chief welcomed the statements by European and British medical regulators that the vaccine should continue to be rolled out.

Even before the scare over blood clots a YouGov poll published on March 7 showed perceptions of safety for the AstraZeneca vaccine in France and Germany were lower than for those developed by Pfizer and its partner BioNTech and Moderna.

The EMA's review covering 20 million people in the UK and the European Economic Area (EEA), which links 30 European countries, included seven cases of blood clots in multiple blood vessels and 18 cases of a rare condition that is difficult to treat called cerebral venous sinus thrombosis (CVST), it said.

Overall the number of thromboembolic events reported after vaccination, both in studies before licensing and in reports after rollout, was lower than that expected in the general population, it said.

That means there is no increase in overall risk of blood clots. However, in younger patients there remain some concerns, related in particular to these rare cases, it said.