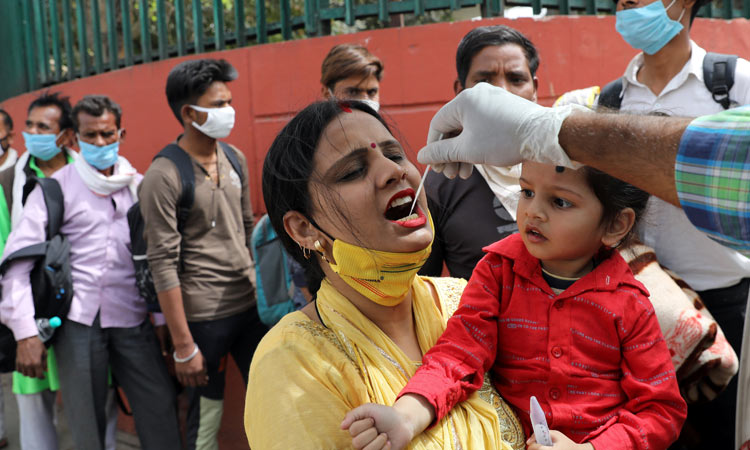 A healthcare worker collects a swab sample from a woman amidst the spread of coronavirus disease at a bus station in New Delhi. Reuters

India said on Wednesday its coronavirus immunisation campaign would continue with "full rigour" despite some concerns in Europe about the safety of the AstraZeneca vaccine it relies heavily upon as infections hit a three month high.

The European Medicines Agency is investigating reports of 30 cases of unusual blood disorders out of 5 million recipients of the vaccine in the region.

Since starting the drive in mid-January, India has administered 36 million vaccine doses, which are mostly the AstraZeneca shots developed with Oxford University and locally known as Covishield.

"We have no signal of concern in this regard," Vinod Kumar Paul, who heads a government committee on vaccines, told a news conference, adding that experts in India had looked into the issue. "Covishield vaccination in the country will go on with full rigour."

The World Health Organisation has said it is assessing whether medical events such as blood clots are related to the vaccination and urged anyone offered a vaccine to take one. AstraZeneca has said a review of safety data has shown no evidence of an increased risk of blood clots.

Paul said as infections had risen in the country since early February, hitting a three-month high on Wednesday, the government was looking at accelerating the vaccination drive that also uses a homegrown shot created by Bharat Biotech and the state-run Indian Council of Medical Research.

The federal health ministry has so far distributed to states 75.4 million vaccine doses, less than half of which have been given to frontline workers, the elderly and people above 45 with health conditions.

Prime Minister Narendra Modi said quick action was needed to contain the surge, as the country's infections tally hit 11.44 million, the third behind the United States and Brazil.

"We need to soon stop the emerging second peak of corona," he said in a virtual meeting with state leaders, urging them to increase testing and strictly monitor mask-wearing. "We need to take quick, decisive steps."

India's cases jumped by 28,903 on Wednesday, the highest increase since Dec.13. Deaths increased by 188, the highest in two months, to stand at 159,044.
Modi said states needed to proactively ensure infections did not increase in the countryside, where healthcare facilities would fall short. Rural India is home to

two-thirds of the country's 1.35 billion people.

The federal government has blamed crowding and a reluctance to wear masks for the spike, ruling out the virus mutations that have been a factor in Western countries.

The recent increase has been led by the western state of Maharashtra, home to India's commercial capital of Mumbai.

Nearly 62% of infections in the past 24 hours and 46% of the deaths were reported by Maharashtra, which has ordered a lockdown in some districts and put curbs on cinemas, hotels and restaurants until end of the month.