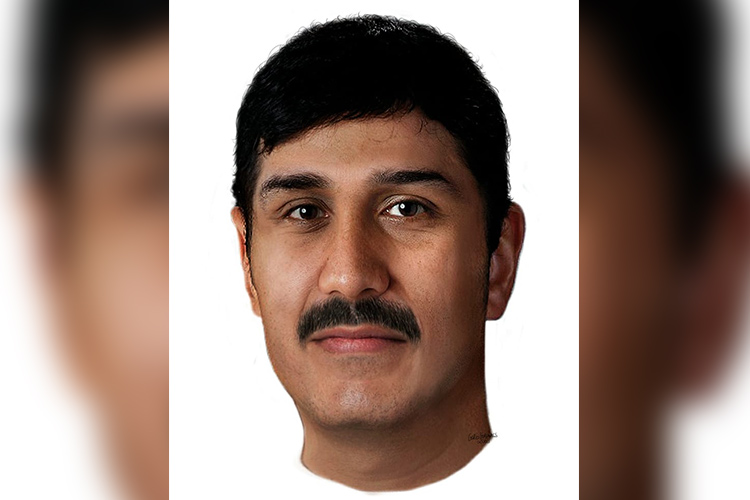 Any information to help identify the deceased can be forwarded to the Dubai Police Call Centre: 04-901.

The Dubai Police are seeking public assistance in identifying the man in the digitally reconstructed picture. Any information to help identify the deceased can be forwarded to the Dubai Police Call Centre: 04-901.

Major General Dr Ahmed Eid Al-Mansoori, Director of the General Department of Forensic Evidence and Criminology, said reconstructing the deceased’s face was very challenging as the body was almost completely decomposed, especially in the face whose features and lines had disappeared.

“An elite team of coroners, digital forensics experts, and professionals from the General Department of Artificial Intelligence at Dubai Police worked tirelessly to compile an identikit of deceased using the latest technologies in digital facial reconstruction" he added.

Al Mansoori further affirmed that the Department, under the directives of Lieutenant General Abdullah Khalifa Al Marri, Commander-in-Chief of Dubai Police, and the follow-up of Major General Khalil Ibrahim Al Mansoori, Assistant Commander-in-Chief for Criminal Investigation Affairs, has always been keen to apply the latest technologies and techniques to help solve cases and uncover mysteries.

No DNA, No Fingerprints

Brigadier Ahmed Matar Al Muhairi, Deputy Director of the General Department of Forensics and Criminology, confirmed that the digitally generated image is the result of great efforts exerted by Dubai Police’s experts who examined the decomposed body which was found about a month ago.

“The remains were severely decomposed due to climatic conditions and corpse erosion as a result of its direct exposure to marine organisms,” he explained.

Brigadier Al Muhairi pointed out that identifying the man was extremely difficult as there was not match to the deceased’s DNA in the Department’s database. He added that the absence of fingerprints due to their decomposition and damage required innovative and smart solutions.

“Forensic experts started with the collected vital data, and discussed with their counterparts at the Digital Forensic Evidence Department constructing a three-dimensional image of the deceased to help members of the public identity the remains,” he noted.

Dr Yunus Al-Balooshi, a forensic consultant at Dubai Police, explained that they faced several challenges in identifying the deceased and analysing his decomposed remains.

“It was very difficult to determine the person’s skin colour and tone as the body’s pigments had disappeared for it had been in the water for a long time,” “Nevertheless, our forensic experts were able, through specialized tests, to determine that the deceased had moderately pigmented brown skin similar to Asians and middle easterners,” he said.

Al-Balooshi pointed out that, during the second stage, they worked to verify the hair colour and length, and they were able to verify this through a single hair left in the body after the decomposition. “We conducted a number of specialized forensic examinations on that single hair, and we confirmed that the deceased had thick hair and around 3cm in length,” Al-Balooshi revealed.

He added that they then determined the age-at-death through the use of osteopathy and pelvic osteometry, which is between 35 to 45.

Al-Balooshi indicated that this type of examination always contributes to narrowing the search for potential missing persons by determining the approximate age group.

He pointed out that after that, experts conducted an examination of the skull to verify its type, shape and size, and the results confirmed that it is also for an Asian individual close to the Middle East region. “We also analysed the skin thickness, eye colour and other necessary vital information and forwarded the thorough anthropology report to the Visual Evidence Analysis Department for further investigations,” Al-Balooshi said.

Major Dr Hamad Al-Awar, Head of the Visual Evidence Analysis Department, said “Upon receiving the anthropology report, we initiated the process of digitally reconstructing the face by taking an x-ray image, and performing a three-dimensional scan of the head area and skull.”

He added that the Department worked in cooperation with the Virtual Training Centre in the General Department of Artificial Intelligence to use 3D scanning techniques and a special 3D drawing programme, with the aim of obtaining a digital restoration of the face and generate an approximate image of the deceased to help investigators solve the case.

Al-Awar concluded that the digital facial reconstruction, which Dubai Police has been using since 2007, is used when all scientific and traditional means of identifying the deceased’s identity reach a dead-end.