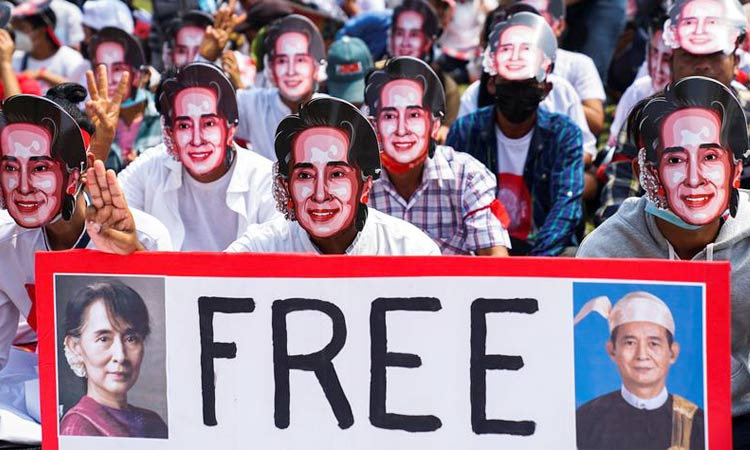 Foreign ministers of Southeast Asian countries prepared for a special meeting with Myanmar’s ruling military on Tuesday in an effort to quell deadly violence and open a channel to tackle its escalating political crisis. 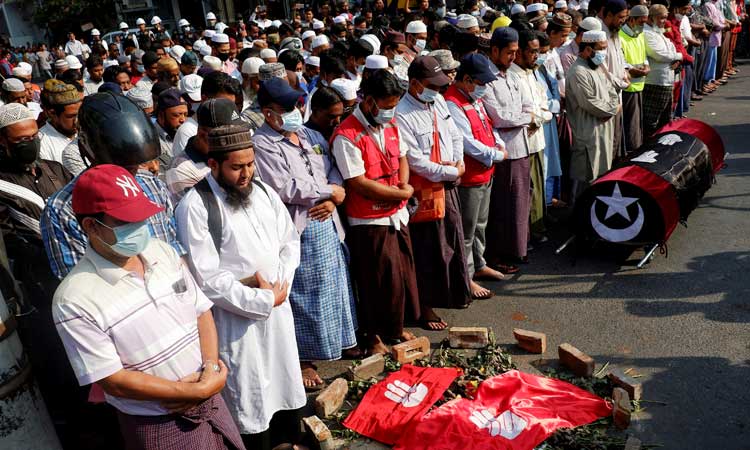 People attend the funeral of a woman who was shot dead during an anti-coup demonstration in Mandalay, Myanmar. Reuters

The streets were largely quiet in the biggest city Yangon early on Tuesday ahead of what protesters said would be another big demonstration. Several shopping malls announced closures due to the unrest, some in places where protests have taken place.

In remarks read on state television by a newscaster, junta leader Senior General Min Aung Hlaing said protest leaders and “instigators” would be punished and threatened action against civil servants who were refusing to work. 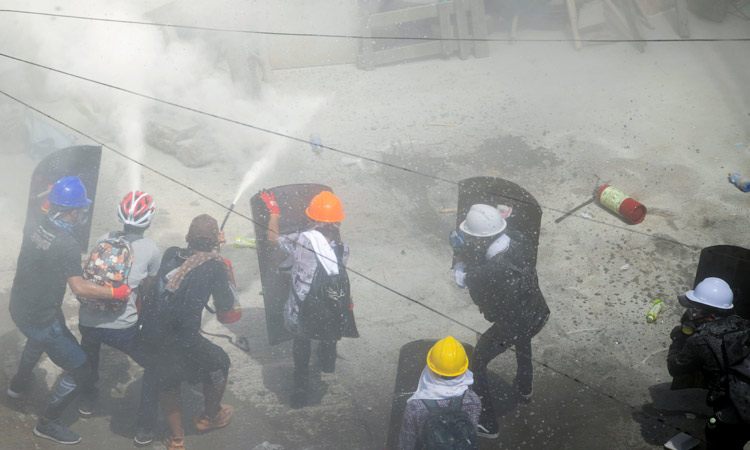 Tear gas and fire extinguisher gas float around protesters as they clash with riot police officers during a protest against the military coup in Yangon, Myanmar. Reuters

Min Aung Hlaing has pledged to hold new elections and hand power to the winner, but has given no clear time frame.

His coup on Feb. 1 halted Myanmar’s tentative steps towards democracy after nearly 50 years of military rule, and has drawn condemnation and sanctions from the United States and other Western countries, and growing concern among its neighbours.

Singapore Foreign Minister Vivian Balakrishnan said his counterparts in the Association of Southeast Asian Nations (ASEAN) would be frank when they meet by video call on Tuesday and will tell a representative of Myanmar’s military they are appalled by the violence. 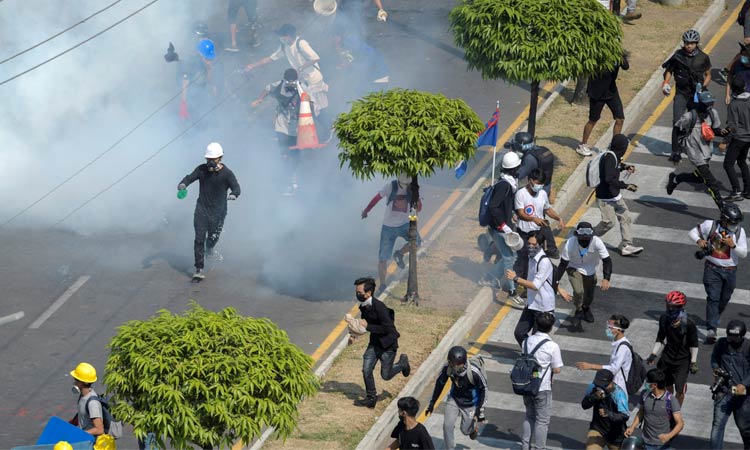 Demonstrators flee from teargas canisters during a protest against the military coup in Yangon, Myanmar. File/Reuters

In a television interview late on Monday, he said ASEAN would encourage dialogue between Suu Kyi and the junta.

“There is the political leadership ... and there is the military leadership, on the other hand. They need to talk, and we need to help bring them together,” he said.

But ASEAN’s effort to engage with Myanmar’s military were met with a fierce rebuke from groups in the anti-coup movement, including a committee of ousted lawmakers that has declared the junta a “terrorist” group.

Sa Sa, the committee’s anointed envoy to the United Nations, said ASEAN should have no dealings with “this illegitimate military-led regime.”

The alumni of ASEAN youth programmes in Myanmar said the bloc should be talking to the international representatives of Suu Kyi’s administration, not to the regime.

“ASEAN must understand that the coup or the re-election promised by the military junta is utterly unacceptable to the people of Myanmar,” it said it a letter to ASEAN.

Philippine Foreign Minister, Teodoro Locsin, indicated on Twitter that ASEAN would be firm with Myanmar and said its policy of non-interference in a member’s internal affairs “is not a blanket approval or tacit consent for wrong to be done there.”

Suu Kyi, 75, appeared at a court hearing via video conferencing on Monday and looked in good health during her appearance before a court, one of her lawyers said. Two more charges were added to those filed against her after the coup, she said.

The Nobel Peace laureate has not been seen in public since her government was toppled and she was detained along with other party leaders.

Hundreds of people have been arrested since the coup, according to activists, the latest a journalist for the Democratic Voice of Burma, who live-streamed security forces outside his apartment on Monday in the coastal town of Myeik, where he had been filming protests. DVB confirmed the arrest.

White House Press Secretary Jen Psaki said the Biden administration was preparing further costs on those responsible for the coup.