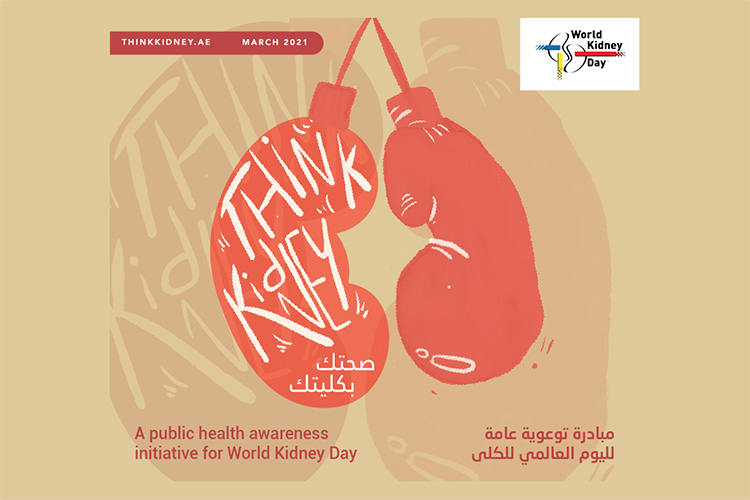 The month-long ‘Think Kidney Campaign’ has been announced on Tuesday.

Aside from kidney diseases, the campaign aims to intensify educational awareness relative to organ donation and transplantation. Initially scheduled are virtual discussions on March 14 (English) and 16 (Arabic). The resource speakers include patients and their family members.

The press statement on Tuesday reads: “An approximate 4,500 patients are reported to be suffering from kidney failure in the UAE and initiative like ‘Think Kidney’ are crucial in providing more information to patients, promote organ donation, and explain the significant improvements in the quality of life after organ transplantation.”

The Cleveland Clinic website defines kidney or renal failure as the condition in which one or both kidneys no longer work, the only known and widely-practised solutions of which are dialysis and organ transplantation.

Meanwhile, the global “National Kidney Month” theme of 2021 is “Managing Chronic Kidney Disease (CKD)-Take Charge of Your Health” organised by the USA-based National Institute of Diabetes and Digestive and Kidney Diseases. “World Kidney Day 2021” rallies for “Living Well with Kidney Disease,” having been decided upon by proponents-the International Society of Nephrology that advances kidney health, and the International Federation of Kidney Foundations which consists of community-based and structured organisations whose mission and vision are to help kidney patients, their families and caregivers, including health workers with regards their medical, psychosocial, and health needs by way of educational projects and initiatives.

The Kidneyfund.org classifies CKD as the “lasting damage to the kidneys that may get worse over time and lead to kidney/renal failure or end-stage renal disease.” CKD patients must undergo periodic dialysis or go for organ transplantation.

On the virtual sessions, featured on March 14 are father-and-son Bhaskar and Pritvik Sendhac. Sixteen-year-old Pritvik is the first live organ beneficiary in the UAE whose malfunctioning kidney had been replaced by his own father’s kidney. They would be joined by the composite team of experts from the AJCSH, Mediclinic City Hospital and MBRU that performed the kidney transplantation. The March 16 session has National Transplant Committee chairperson Dr. Ali Al Obaidli and brother-sister Ali and Hind Al Muhairi. Ali donated one of his kidneys to Hind.

Dubai Healthcare City Authority chief executive officer (CEO) Jamal Abdulsalam noted the enabling ecosystem towards kidney health and transplantation brought about by the “strategic partnerships” among the five institutions since 2015. He said the ‘Think Kidney’ campaign would be a big help in the information drive and decision-making processes.

Al Jalila Foundation CEO Dr. Abdulkareem Sultan Al Olama said “their top priority is to transform lives through medical innovation and with the support of our donors we invest in research and provide life-saving treatment to those suffering from kidney disease.”

Mediclinic City Hospital director Matthew Dronsfield said the “Think Kidney highlights the importance of continuing private-public partnerships, proved to be a key factor towards better health for all.

MBRU-Administration & Professional Services deputy vice chancellor Dr. Amer Al Zarooni said: “Our goal is to advance health in the UAE and beyond. Our core values of connectivity, giving, and excellence is reflected in this collaborative ‘Think Kidney’ campaign.”