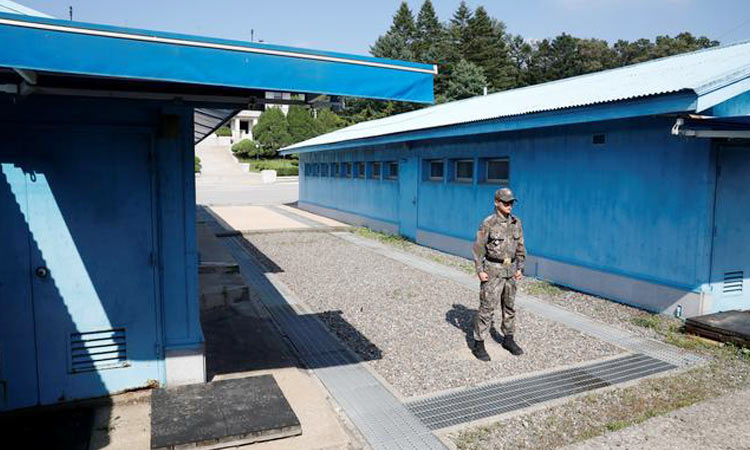 A S.Korean soldier stands guard in the truce village of Panmunjom inside the demilitarized zone (DMZ) separating the two Koreas, S.Korea. File/Reuters

South Korea’s military said on Tuesday it had captured a North Korean man who crossed the heavily fortified border between the two countries and was investigating whether he tried to defect.

The man was found about 4:20am (1920 GMT Monday) near a checkpoint on the eastern end of the Demilitarised Zone (DMZ) separating the rival Koreas, and was taken into custody after a three-hour search, the Joint Chiefs of Staff (JCS) said.

“He is presumed to be a North Korean and we’re conducting an investigation into details, including how he had come down and whether he wished to defect,” the JCS said in a statement.

There was no unusual movement across the border but the military is reviewing its security posture in the region, it added.

The rare border crossing came as North Korea’s prolonged lockdowns rolled back the number of defectors arriving in South Korea to an all-time low last year.

Some 200 North Koreans settled in the South last year, down around 80% from 2019, Unification Minister Lee In-young has said, citing the reclusive state’s shutdown of its frontiers in January 2020.

The last publicly known case was in November when a North Korean man defected to the South via the eastern DMZ.

Cross-border ties soured after denuclearisation talks between Pyongyang and Washington stalled in 2019.

A spat simmered in September after North Korean troops shot dead a South Korean fisheries official who went missing at sea, fanning public and political uproar in the South.

In July, North Korean leader Kim Jong Un declared an emergency and sealed off a border town after a person with COVID-19 symptoms illegally crossed the border into the North from the South.

North Korea has not confirmed any COVID-19 cases, though Seoul officials have cast doubt on there being zero cases citing the country’s active exchanges with China, where the virus first emerged, prior to its border closure.