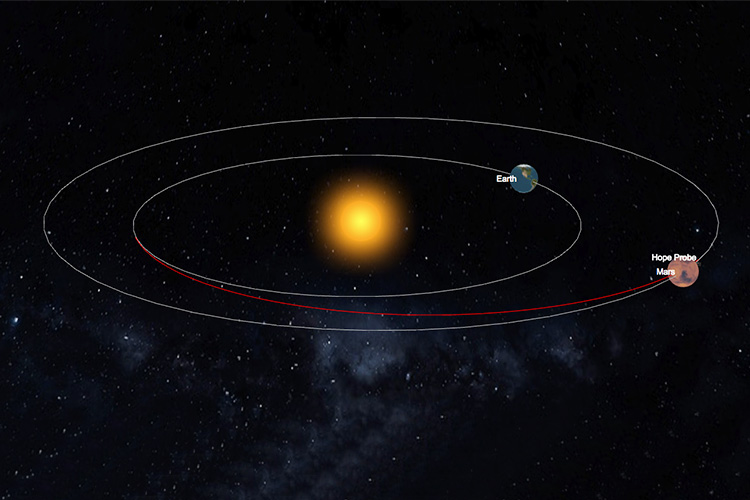 A graphic illustration of the Hope Probe entering the Mars’ orbit.

Mission controllers at the UAE’s space center in Dubai announced that the unmanned craft, called Amal, Arabic for Hope, reached the end of its nearly seven-month, 300-million-mile journey and began circling the red planet, where it will gather detailed data on Mars’ atmosphere.

The probe will now reveal the secrets of Martian weather.

It is the first of three spacecraft to arrive at the Red Planet this month.

- UAE Mission Control Centre says Hope Probe has started the fuel burning process. The burning of the fuel will reduce the speed of the Hope probe from 121,000 km / h to about 18,000 km / h.

Sheikh Mohammed in a video message on Twitter said in the coming hours, the Hope Probe will reach Mars… that will be the biggest challenge. It will be entering the orbit.


Mohammed said, “Even if we did not enter the orbit, we have entered history. This is the farthest point in the universe that Arabs have reached throughout their history.”

Sheikh Mohammed said, “In the name of God, the Most Gracious, the Most Merciful… my brothers and sisters… the sons of the Emirates… and the sons of the Arab and Islamic nation… peace be upon you and the mercy and blessings of God…

“During the coming hours, the Hope Probe will reach Mars, and the biggest challenge will be entering orbit Mars, 50% of the human missions that tried before us, could not enter the orbit, but I say, even if we did not enter the orbit, we entered history, this is the farthest point in the universe that Arabs have reached throughout their history… more than 5 million hours of work, by more than 200 Emirati engineer…

“Our goal is to give hope to all Arabs, that we are able to compete with other nations and people. We ask God for success in reaching the planet Mars... Peace be upon you and God's mercy and blessings.”


Sheikh Mohammed also said on Twitter, “Tomorrow we celebrate our 50th anniversary through our arrival to Mars, God willing. We celebrate the fruit of the efforts exerted by the late Sheikh Zayed and Sheikh Rashid to build mankind.

“Tomorrow we start preparing for the new 50 years. Tomorrow we prove to the world that nothing is impossible for the UAE and Emiratis. Tomorrow we take Arabs to the farthest point in the universe.”

Sheikh Hamdan Bin Mohammed Bin Rashid Al Maktoum, Crown Prince of Dubai and Chairman of Dubai Executive Council, said, “Today, I was briefed on MBR Space Centre’s final preparations for the Hope Probe’s mission to Mars and we assessed the different scenarios as it nears the Red Planet. We are incredibly proud of this young team for making one of the UAE’s most ambitious projects a reality.

“Hope Mars embodies a message of inspiration, ambition, and achievement for the Arab world and the region’s entire youth. We are proud that the UAE, founded 5 decades ago, will become the 5th country to reach Mars.”

Latifa Bint Mohammed Bin Rashid Al Maktoum, Chairperson of Dubai Culture said on Twitter, “Our young nation is set to achieve another remarkable milestone in our enterprise into space with the expected arrival of the Hope Probe to Mars tomorrow.

“A moment of pride for all Emiratis and Arabs; thankful to our leaders whose vision and dedication paved the way for this exceptional achievement that shall forever inspire future generations in the Arab world. #ArabsToMars #HopeProbe…”