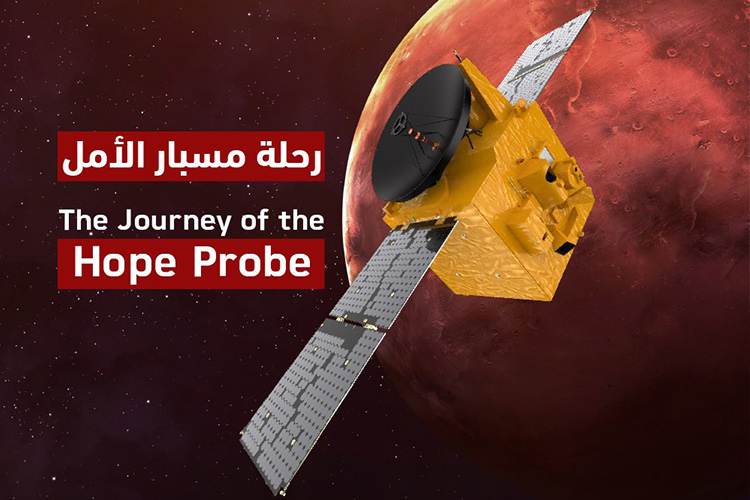 After successfully completing its 7-month cruise to Mars, the Emirates Mars Mission’s Hope Probe is days away from the most critical part of its historic voyage to the Red Planet – the critical manoeuvre that will define the success or failure of the mission to place its orbiter, the Hope probe, into Mars orbit.

The Mars Orbital Insertion (MOI) manoeuvre involves reversing the spacecraft and firing the Hope probe’s six Delta-V thrusters in a 27-minute deceleration ‘burn’ to rapidly slow the speed of the spacecraft from 121,000 km/h to 18,000 km/h, and will see the Operations Team confirming whether the Probe has achieved a stable capture orbit around Mars.

Omran Sharaf, Project Director of the Emirates Mars Mission, said: “We are nearing the most critical part of the mission. Though we have carried out multiple tests and are confident about the manoeuvres we have performed, space exploration always includes an element of risk and we are keenly aware that 50% of all missions to Mars have failed.

“Despite years of tests and peer reviews, this operation is the first time our platform has been tested in such a complex and stressful manoeuvre in deep space.”

MOI is set to commence just after 7:30pm UAE time on the Feb.9, with the signal confirming the manoeuvre has started reaching earth eleven minutes afterwards, at 7:42pm.

The delay is caused by the radio signal having to travel the long distance from Mars to Earth.

The MOI burn will commence when the probe is a mere 2,363 kilometres from Mars’ planetary surface.

Dozens of landmarks across the UAE and the Arab world are turning red in celebration of the UAE’s Hope probe, set to arrive to Mars on February 9 after succeeding in the most critical stage of its historic journey to the Red Planet’s orbit, the Mars Orbit Insertion.

Countries in the Arab region are also lighting up their landmarks in celebration of the first-ever Arab interplanetary mission that will mark the region’s entry to space exploration. "The Zone" on Takhassusi Street in Riyadh, Saudi Arabia; the Bahrain World Trade Center in Bahrain; the Kuwait Tower in Kuwait; The Cairo Tower in Egypt; the Roman Theatre in Jordan; The Iraq Museum and the Baghdad Mall, Iraq have turned red to celebrate the high-anticipated Hope probe’s arrival to Mars on February 9, after seven months of travelling 493 million kilometres into deep space.

The burn will consume half of the Hydrazine fuel the probe is carrying and will be the first test of the probe’s propulsion system over such a long duration.

Hope’s six thrusters will deliver some 650 Newtons of thrust during the burn. Should a thruster pair fail, the burn duration will increase to compensate.

A second pair failing would terminate the mission.

In addition to the six Delta-V thrusters, the probe also uses a set of eight RCS (Reaction Control System) thrusters, which will maintain the spacecraft’s orientation during the burn.

Small adjustments to the spacecraft’s inclination are made using its four reaction wheels.

The MOI burn will commence when the spacecraft is 2,363 km from the planetary surface and will see Hope reaching a proximity of 1,062 km from Mars (the periapse of its planned capture orbit) before the burn ends at 1,441 km distance from the planet.

Some five minutes following the MOI burn, the Hope probe flies into the dark side of Mars, ‘occultation.’

Radio signals will be lost for some 15 minutes until the probe can be contacted again. With its command and control centre based at MBRSC in Dubai, EMM depends on the Deep Space Network (DSN) of antennas for its communication. Antennas based in Goldstone, California, Canberra and Madrid.

During the MOI operation, Hope’s signals will be routed through the Madrid antenna.

Hope’s capture orbit takes the spacecraft from a distance of 1,000 (periapse) to 49,380 (apoapse) km from Mars’ planetary surface.

In this phase, Hope’s instrumentation will be tested and the spacecraft will, over the coming two months, transition to its science orbit.

Three Transition To Science (TTS) manoeuvres are currently planned to move the probe from its capture to its science orbit.

The final number of such manoeuvres will be defined by the accuracy/success of MOI. The transition to Hope’s science orbit will be completed by April 2021.

Hope has a planned 20,000 – 43,000 km elliptical science orbit, with an inclination to Mars of 25 degrees. In this orbit, the probe completes one orbit of the planet every 55 hours and will capture a full planetary sample every nine days.

EMM and the Hope probe are the culmination of a knowledge transfer and development effort started in 2006, which has seen Emirati engineers working with partners around the world to develop the UAE’s spacecraft design, engineering and manufacturing capabilities.

The launch will see the two-stage, 53-metre Mitsubishi rocket reach a launch velocity of 40,000 km/h to place the Probe into earth orbit, from where it will start its 7-month cruise at a speed of some 126,000 km/h to reach Mars Orbital Insertion (MOI) in February 2021.

Mars Hope is a fully autonomous spacecraft, carrying three instruments to measure Mars’ atmosphere. Weighing some 1,350 kg, and approximately the size of a small SUV, the spacecraft was designed and developed by MBRSC engineers working with academic partners, including LASP at the University of Colorado, Boulder; Arizona State University and the University of California, Berkeley.