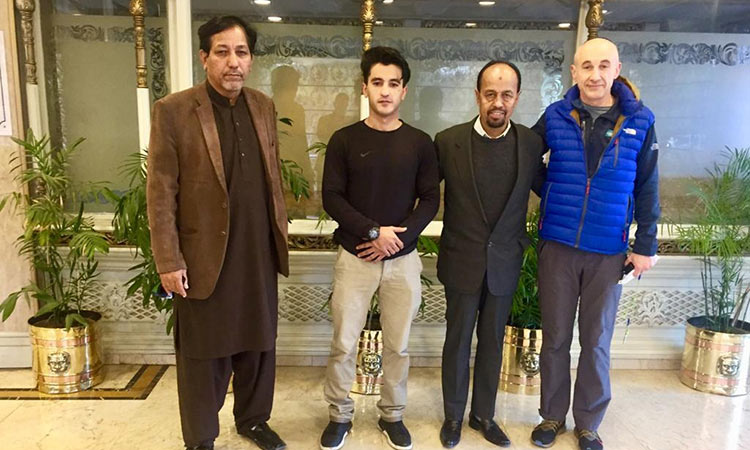 Alex Goldfarb (right) poses for a photo with members of the Alpine Club of Pakistan in Islamabad. File/Reuters

A Russian-American climber who went missing last week while trying to scale the world's 12th-highest peak amid harsh winter weather in northern Pakistan has been found dead, a spokesman for the expedition said on Tuesday.

The tourist police in the town of Gilgit made the announcement on Twitter, saying Alex Goldfarb went missing on Friday while he was trying to summit the Pastore Peak, not far from K2 — the most prominent peak on the Pakistani side of the Himalayan range, and the world’s second tallest after Mount Everest.

"We are deeply saddened to have lost our climbing partner and friend," said Laszlo Pinter, spokesman for the Broad Peak Winter Expedition 2021.

"The helicopter search mission has found his body on Pastore Peak where he is presumed to have fallen off the mountain," he said in a statement. 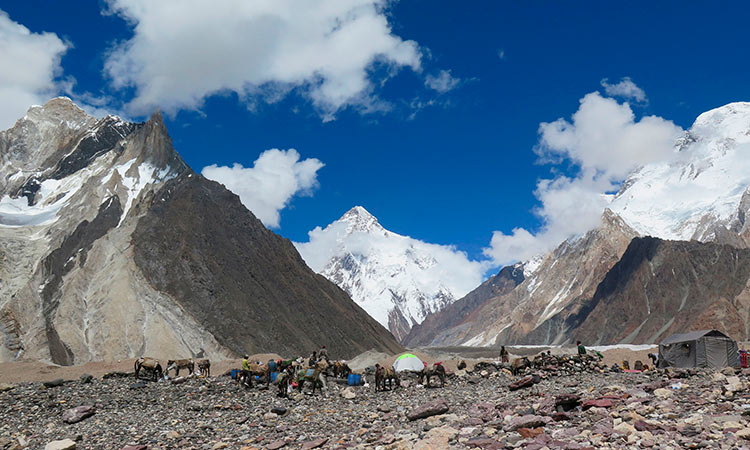 Porters set up tents at the Concordia camping site in front of K2 summit (centre) in the Gilgit region. AFP

Muhammad Ali Sadpara, a famous Pakistani mountaineer who was part of the rescue team, also tweeted the sad news. Efforts were now under way to bring Goldfarb's body down with the help of Pakistani and foreign mountaineers, Haidri told The Associated Press.

It has been a bittersweet week for the climbing community, which saw 10 Nepali climbers scale K2 for the first time in winter -- but also the death of Spanish climber Sergi Mingote on the same mountain.

Goldfarb was attempting a winter ascent of Broad Peak with Hungarian Zoltan Szlanko as part of a two-man non-sponsored expedition.

The pair had first been acclimatising on the 6,209 metre Pastore Peak. 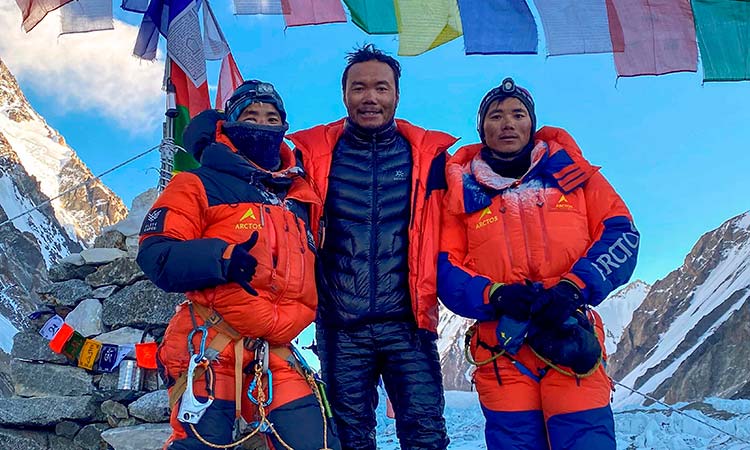 This handout photo shows Nepali mountaineers in high spirits after reaching the summit of Mt K2 in Pakistan. AFP

Their team described the attempt as "the cleanest style without any high altitude porters and supplemental oxygen."

Szlanko, an experienced climbing instructor and mountaineer rescuer, deemed conditions too dangerous and insisted both should return, Pinter said, but Goldfarb pressed ahead.

Karrar Haidri, a spokesman for the Alpine Club of Pakistan, said the Pakistan Army found Goldfarb's body on Monday.

It was first climbed in the summer of 1957 by an Austrian team, while a Polish quartet summited in winter in 2013 but two went missing on the descent and were declared dead days later.

Goldfarb had been missing since Saturday, the same day the Nepali team summited K2, the world's second-highest mountain and the last peak above 8,000 metres (26,000 feet) to be conquered in winter.

Despite being famed for their climbing expertise, there has never before been a Nepali climber on the first winter ascent of a peak higher than 8,000 metres.

K2 is known as the "Savage Mountain" because of its punishing conditions: winds can blow at more than 200 kilometres per hour (125 miles per hour), and temperatures can drop to minus 60 degrees Celsius (minus 76 Fahrenheit).