US stands by Taiwan, envoy says after cancelled trip - GulfToday 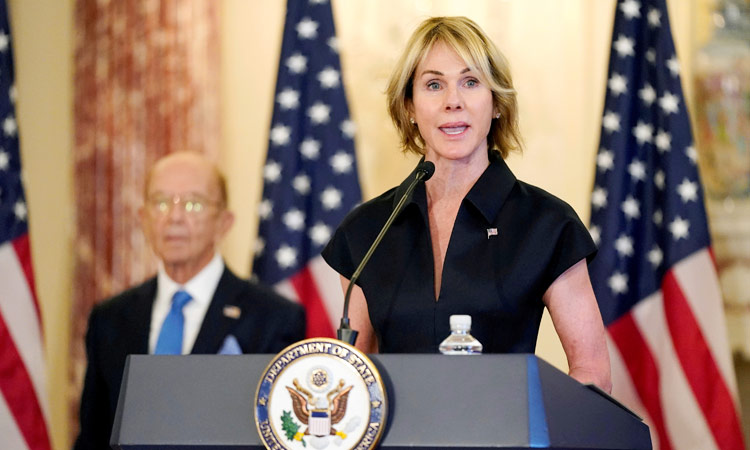 Kelly Craft speaks during a news conference at the US State Department in Washington, US. File/Reuters

The United States stands by Taiwan and always will, the US ambassador to the United Nations Kelly Craft said on Wednesday following a call with Taiwan President Tsai Ing-wen, after her own trip to Taipei this week got scrapped.

Craft’s planned visit had come in the teeth of strong objections from China which views the island as its own territory.

But the trip was cancelled by the State Department as part of a bar on all travel ahead of the transition to the incoming Biden administration.

Craft, who is due to leave the role when Joe Biden assumes the presidency next week, wrote on Twitter that it was a “great privilege” to speak with Tsai.

“We discussed the many ways Taiwan is a model for the world, as demonstrated by its success in fighting COVID-19 and all that Taiwan has to offer in the fields of health, technology & cutting-edge science,” she said.

“Unfortunately, Taiwan is unable to share those successes in UN venues, including the World Health Assembly, as a result of PRC obstruction,” Craft added, referring to the People’s Republic of China.

“I made clear to President Tsai that the US stands with Taiwan and always will, as friends and partners, standing shoulder to shoulder as pillars of democracy.”

Craft’s visit would have been highly symbolic as Taiwan is not a UN member due to China’s objections. Beijing says only it has the right to speak for Taiwan on the world stage, something Taipei’s democratically-elected government rejects.

Tsai told Craft that Taiwan would keep pushing for access to the United Nations and UN-related meetings, and hoped that the United States would continue to support this, Taiwan’s presidential office said.

“We will continue to let the world know that Taiwan is a force for good and an important partner. We are capable and determined to contribute to the international community,” the office cited Tsai as saying.

It added that David Feith, Deputy US Assistant Secretary of State for East Asian and Pacific Affairs was also on the call.

Beijing has been angered by stepped-up support for Taiwan from the administration of outgoing President Donald Trump, including trips to Taipei by top US officials, further straining Sino-US ties.

US Secretary of State Mike Pompeo on Saturday said he was lifting restrictions on contacts between US officials and their Taiwanese counterparts.

Craft’s Taiwan trip appeared to be another part of an effort by Pompeo and Trump’s Republican administration to lock in a tough approach to China before Democratic President-elect Biden takes office on Jan.20.