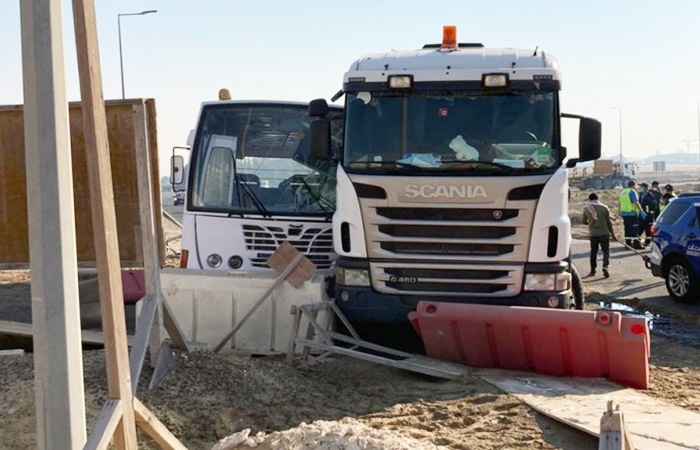 Aftermath of the vehicles after the collision.

At least 27 people were injured in a tragic bus accident that took place on Wednesday morning, after the minibus  collided with a truck near Dubai Techno Park.

The accident was reported around 8:30 am, and fortunately, there were no casualties and the sustained injuries were minor.

Police patrols and ambulances rushed to the scene to provide medical and traffic aid for the injured and surrounding motorists in the accident site.

Police officials revealed that traffic surveyors were dispatched to the scene to investigate and collect evidence of the accident cause.

The injured workers were immediately transferred to Rashid Hospital to receive the necessary medical treatment.

Brigadier Saif Muhair Al Mazrouei, Director of the General Department of Traffic, pointed out that the accident had taken place because drivers were not driving with enough safe space between the two vehicles.

He added that 4 people sustained medium bodily injuries, while the 23 other workers had minor ones.

Lastly, police urged motorists and road users to take all necessary safety precautions, as well as abide by speed limits and leaving a safe space between vehicles in order to avoid the occurring of such tragic accidents.