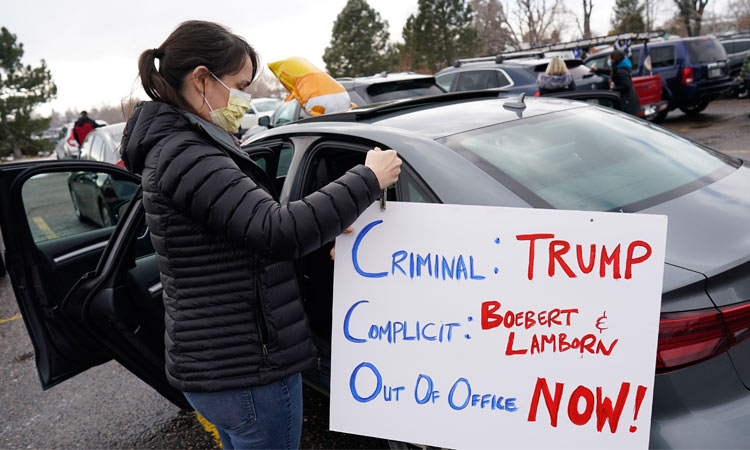 A participant hangs a placard from her vehicle during a gathering calling for the impeachment of Donald Trump at South High School on Sunday. AFP

Impeachment pressure mounting, the House worked swiftly on Monday to try to oust President Donald Trump from office, pushing the Vice President Mike Pence and cabinet to act first in an extraordinary effort to remove Trump in the final days of his presidency.

Trump faces a single charge — "incitement of insurrection” — in an impeachment resolution that could go to a vote by mid-week. First, Democrats called on Pence to invoke constitutional authority under the 25th Amendment to remove Trump from office before Jan.20, when Democrat Joe Biden is to be inaugurated.

The chairman of the US House of Representatives' Rules Committee said he expected the article of impeachment against Trump to get to the House floor for a vote on Wednesday and predicted it will pass. 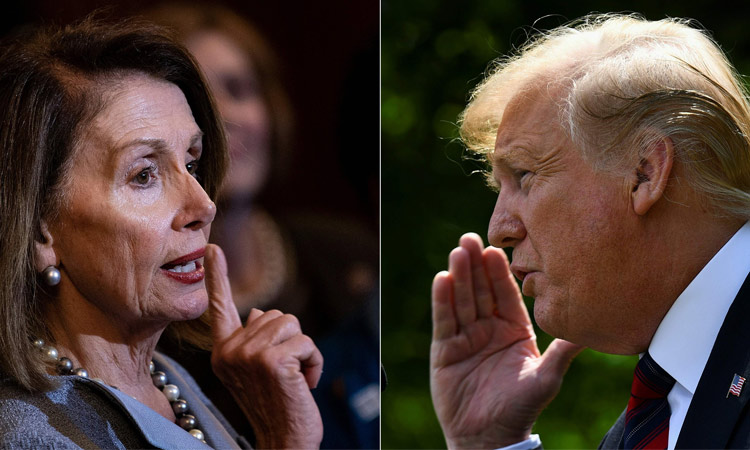 "President Trump gravely endangered the security of the United States and its institutions of Government,” reads the four-page impeachment bill. "He will remain a threat to national security, democracy, and the Constitution if allowed to remain in office,” it reads.

House Speaker Nancy Pelosi is recalling lawmakers to Washington for votes as more Republicans say it's time for Trump to resign. Republican Sen. Pat Toomey of Pennsylvania, joined GOP Sen. Lisa Murkowski of Alaska over the weekend in calling for Trump to "go away as soon as possible.”

During an interview on "60 Minutes” aired Sunday, Pelosi invoked the Watergate era when Republicans in the Senate told President Richard Nixon, "It’s over.” "That’s what has to happen now,” she said.

On Monday, a House resolution calling on Pence to invoke constitutional authority to remove Trump from office was blocked by Republicans. However, the full House is set to hold a roll call vote on that resolution on Tuesday, and it is expected to pass.

After that, Pelosi said Pence will have 24 hours to respond. Next, the House would proceed to impeachment. A vote could come Wednesday.

Pence has given no indication he is ready to proceed on such a course, which would involve invoking the 25th Amendment to the Constitution with a vote by a majority of the Cabinet to oust Trump before he leaves office.

While many have criticised Trump, Republicans have said that impeachment would be divisive in a time of unity.