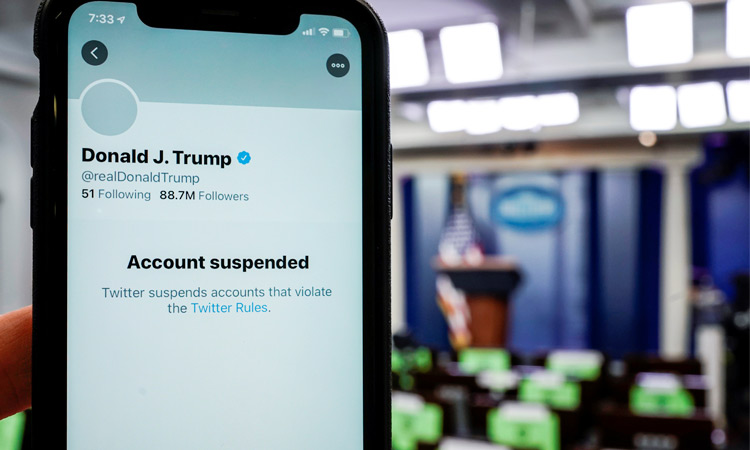 A photo illustration shows the suspended Twitter account of Trump on a smartphone at the White House. Reuters

Twitter banned President Donald Trump's account Friday, citing "the risk of further incitement of violence" following the deadly insurrection at the US Capitol on Wednesday.

@realDonaldTrump, the Twitter feed that grew from the random musings of a reality TV star into the cudgel of an American president, has died. It was not quite 12 years old.

The provocative handle was given birth by a New York real estate tycoon who used it to help him become the 45th US president.

It died more than 57,000 tweets later, with Trump using some of his final postings on the powerful platform to commiserate with a pro-Trump mob that besieged the halls of Congress in a deadly assault as lawmakers were set to certify his defeat. 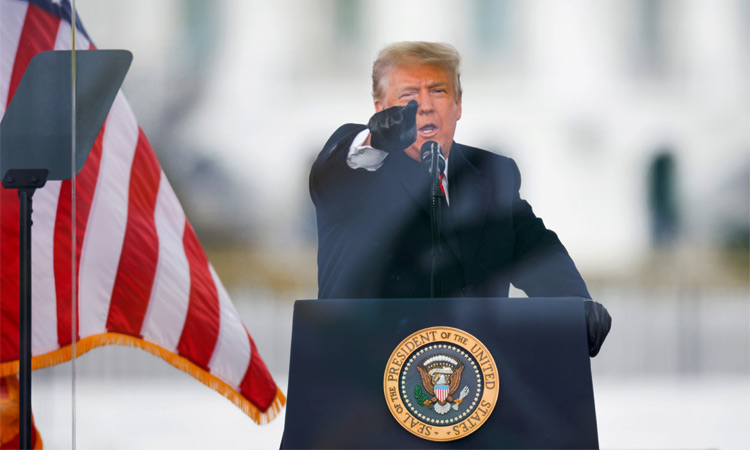 Trump speaks during a rally to contest the certification of the 2020 US presidential election results. File/Reuters

Trump’s Twitter persona has long functioned as a mix of policy announcements, often out of the blue; complaints about the media; disparagement of women, minorities and his perceived enemies; and praise for his supporters, replete with exclamation marks, all-caps, and one-word declarations such as "Sad!”

He has fired numerous officials on Twitter and his posts, like his speeches at rallies, are a torrent of misinformation.

The official account for the President of the United States, @POTUS, remains live. In fact, Trump, who issued a statement Friday evening that denounced Twitter as an enemy of free speech and floated the idea that he might build his own "platform,” also posted it on the @POTUS account, where it was quickly deleted.

The Twitter logo is displayed on a screen on the floor of the New York Stock Exchange in New York City, US. File/Reuters

Twitter says using another account to evade a suspension is against its rules, and that while it won't ban government accounts like @POTUS or @WhiteHouse, it will "take action to limit their use.”

Shannon McGregor, an assistant professor of journalism and media at the University of North Carolina, said the move lets Twitter try to curry favor with the incoming Biden administration. Trump "only has two weeks left in power, and that certainly makes it easier to deplatform the president,” she said.

Others saw a more ominous portent in Twitter's action. "Big Tech is not going to stop with the president of the United States," Kay James, president of the conservative think tank The Heritage Foundation, wrote in a tweet. "They can ban you next and everyone reading this.”

In the Trump tweets cited by Twitter, Trump stated that he will not be attending the inauguration and referred to his supporters as "American Patriots,” saying they will have "a giant VOICE long into the future.”

Twitter said these statements "are likely to inspire others to replicate the violent acts that took place on January 6, and that there are multiple indicators that they are being received and understood as encouragement to do so.”

Twitter said its policy enables world leaders to speak to the public, but that these accounts "are not above our rules entirely” and can’t use Twitter to incite violence. Trump had roughly 89 million followers. Twitter shares fell roughly 4% in after-hours trading, reflecting concerns that the Trump ban might reduce usage and advertising sales.

Jonathan Greenblatt, who heads the Anti-Defamation League, said that banning Trump was an "excellent step” and "a fitting end to a legacy of spewing hate and vitriol." The ADL was part of a coalition of civil rights and advocacy groups on Friday calling for Twitter to ban Trump’s account. 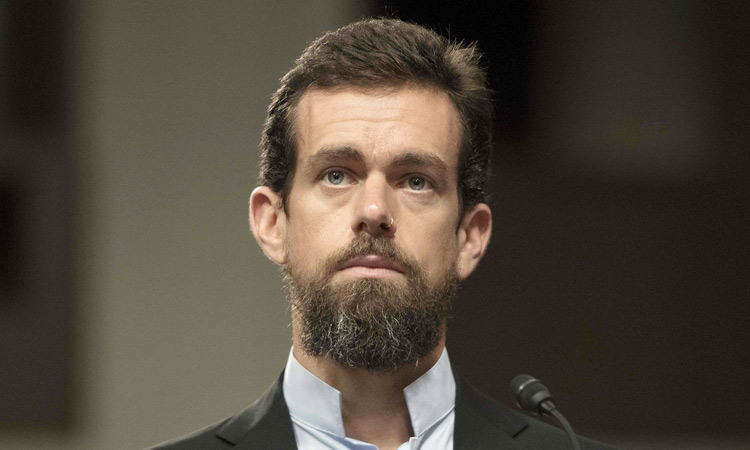 Trump’s access to social media platforms that he used as a megaphone during his presidency has been largely cut off since a violent mob of his supporters stormed the Capitol in Washington last week.