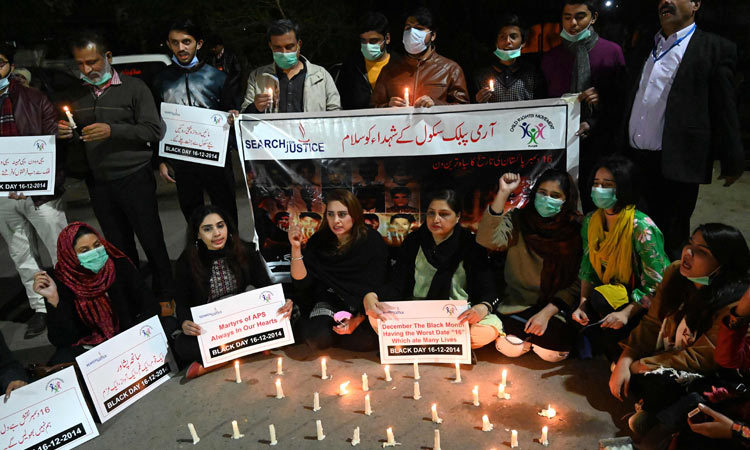 Human rights activists hold placards to mark the anniversary of an attack on the Army Public School Peshawar in Lahore on Wednesday. AFP

Today (Dec.16, 2020) marks six years since the brutal attack at the Army Public School (APS) Peshawar took place, and the country continues to remember and mourn the loss of over 140 innocent lives.

As the country marked the sixth anniversary of the APS Peshawar carnage on Wednesday, politicians  and Pakistani showbiz stars paid homage to the families that suffered in the heinous 2014 attack in which 131 school children and 10 others lost their lives.

The attack had shocked the entire nation as terrorists stormed inside the school and fired at children who were attending classes at the time. 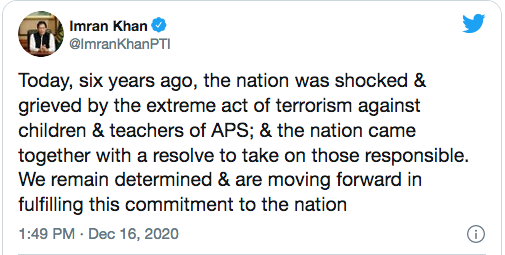 Prime Minister Imran Khan also recalled the day that came as a shock and ended up uniting the nation against such vile acts of terrorism.

"Today, six years ago, the nation was shocked and grieved by the extreme act of terrorism against children and teachers of APS; and the nation came together with a resolve to take on those responsible. We remain determined & are moving forward in fulfilling this commitment to the nation," tweeted the premier.

Speaker of the National Assembly Asad Qaiser also vowed to "continue to fight until the scourge of terrorism and extremism would be rooted out from our country." 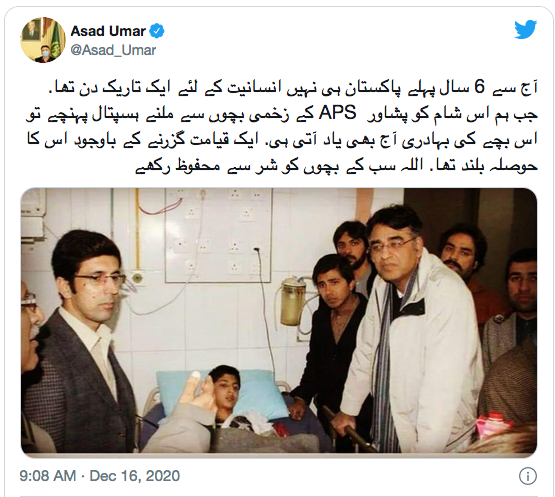 Minister for Planning, Development and Special Initiatives Asad Umar said Dec 16, 2014, was not a "dark day" only for Pakistan but also for the whole of humanity. Sharing an old picture with one of the survivors of the attack, he said he remembered the "bravery of the boy whose courage was intact even after [what was for him] the end of the world."

"Under the guidance of Nawaz Sharif, the nation, with the help of the armed forces and civil security agencies, took revenge for the blood of its children, defeated the terrorists and restored peace," she said. 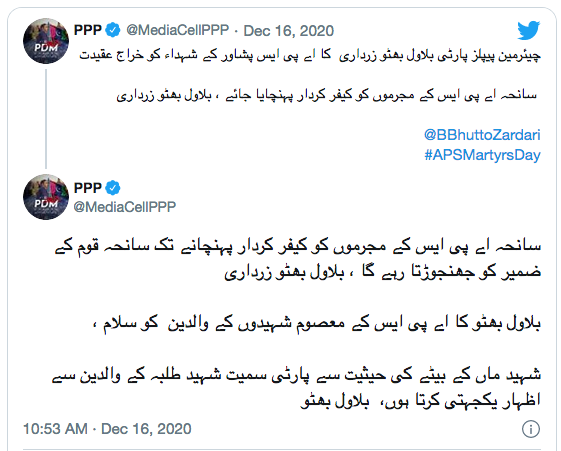 PPP Chairperson Bilawal Bhutto Zardari demanded that those responsible for the attack be punished, saying that until they were brought to justice, the APS incident would continue to "haunt the nation's conscience."

Bilawal expressed solidarity with the parents of the martyred children and paid tribute to them. He said it was the responsibility of the government and the state to prove that terrorists had been "weakened."

KP Health Minister Taimur Khan Jhagra said "words would never be enough". He shared a picture of the martyred students and wrote: "On this day, the memory of those who sacrificed their lives at #APSPeshawar must spur us on to build a country where the future of millions of children is bright." 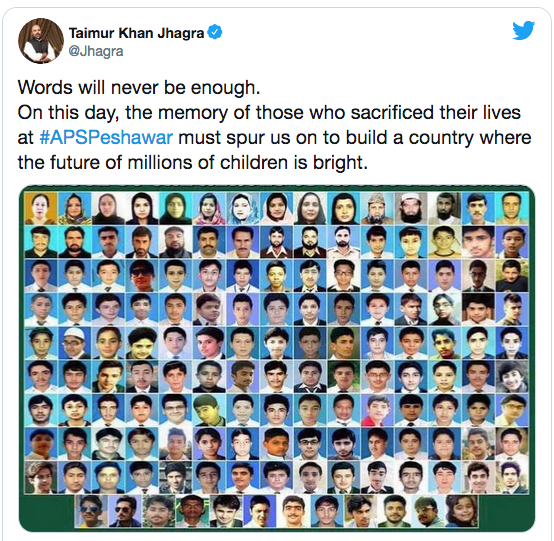 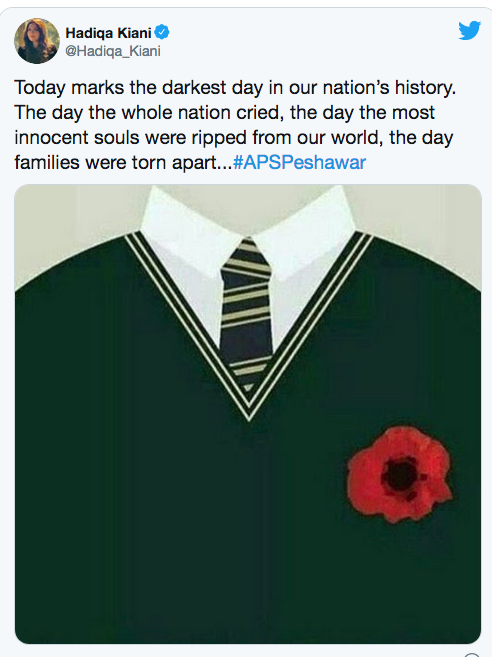 She then added, "May Allah continue to give the survivors the courage and strength to make our country proud. May Allah protect and guide us all." 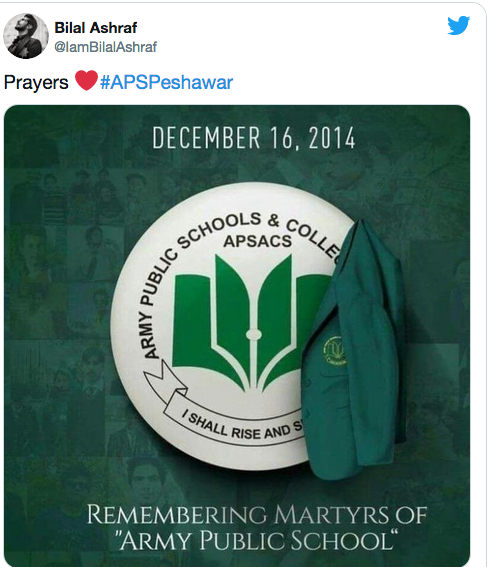 Seasoned actor and producer Humayun Saeed also mourned the loss that continues to break our hearts each year this day arrives. "16th December — a tragic reminder of invaluable loss in our war against terrorism. Nothing is more important than the safety and well-being of our children. May Allah always protect them all," he wrote.

Whereas Bilal Ashraf, Sanam Jung and Ali Rehman Khan went on to share the hashtags #APSPeshawar, #Neverforget and #APSmartyrs. 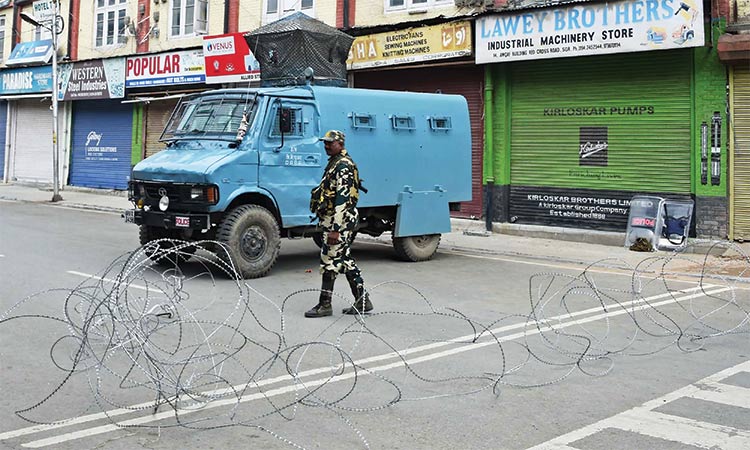