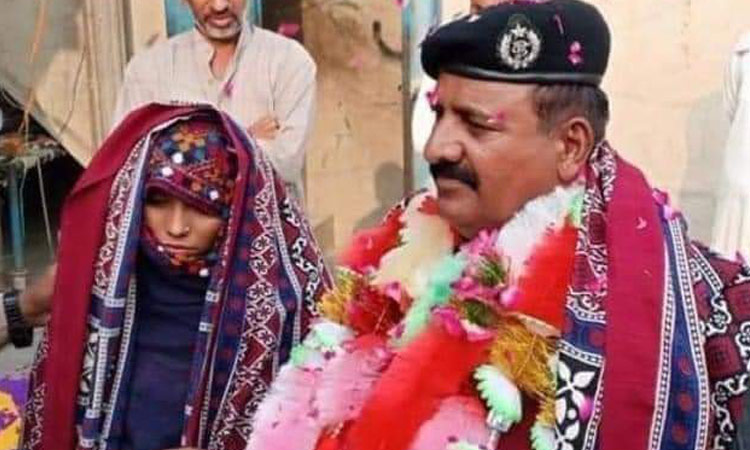 Mohammad Bux Buriro and his daughter receive appreciation from the residents.

Pakistan Prime Minister Imran Khan on Saturday lauded the Sindh police official and his daughter for the role they played in arresting the suspect in the Kashmore rape case.

ASI Mohammad Bux Buriro of Kashmore and his daughter were instrumental in the arrest of the suspect, Rafiq Malak. Buriro’s daughter had assisted in luring Malak into a trap by acting as bait.

The premier said he spoke to the police officer and lauded "exemplary initiative and courage" he had shown along with his daughter. "The nation is proud of them and he [ASI Buriro] has given positive uplift to the image of police."

Imran also said the government will next week bring a "stringent, holistic" anti-rape ordinance which will close "all loopholes."

The incident took place in Sindh's Kashmore, where a gang of rapists called in a mother and her five-year-old daughter from Karachi to Kashmore for a fake job placement.

As per reports, the mother and daughter were asked to call in another girl for them to misuse and assault, in order for them to be released.

The culprits kept the daughter while the mother was sent off to make arrangements for another girl.

However, the mother, after being released by the culprits, reported the matter in a local police station.

41-year-old-Pakistani woman goes missing in UAE, please contact police if you see her

It was then that ASI Mohammad Bux Buriro decided to take the risk of sending his own daughter with the mother to be handed over to the culprits, with a plan to nab them on the spot.

The mother, where the culprits were called to hand over her daughter and take Buriro's daughter as bait, took her to a local park.

The police arrested the culprit named Rafiq Malak, immediately after he handed over the five-year-old daughter and was taking Buriro's daughter with him.

Malak's arrest and investigation also led to the arrest of Bugti, who opened indiscriminate firing and killed Malak during the police raid.

Police maintains that they had taken Malak to identify Bugti, who was later arrested and weapon, with which he had shot Malak, was seized.

Buriro's and his daughter's bravery has been lauded by the Sindh government, who has said that they would write to the federal government to award him the Quaid-e-Azam Police Medal and the highest civilian award for his daughter.

"ASI Buriro, led by Kashmore SSP carried out the operation for the arrest of the suspect with great valour. I am short of words to pay tribute to this brave man," said Sindh government's spokesperson Murtaza Wahab. He also saluted Buriro's daughter for her "exemplary courage and bravery."

"Tracing the gang would have been very difficult had it not been for Buriro's bravery."

"The gang-raped mother and daughter were being treated at Civil Hospital Larkana. Singh government would make arrangements for the five-year-old girl's treatment anywhere in the world if needed. The government will also bear her educational expenses," he added.