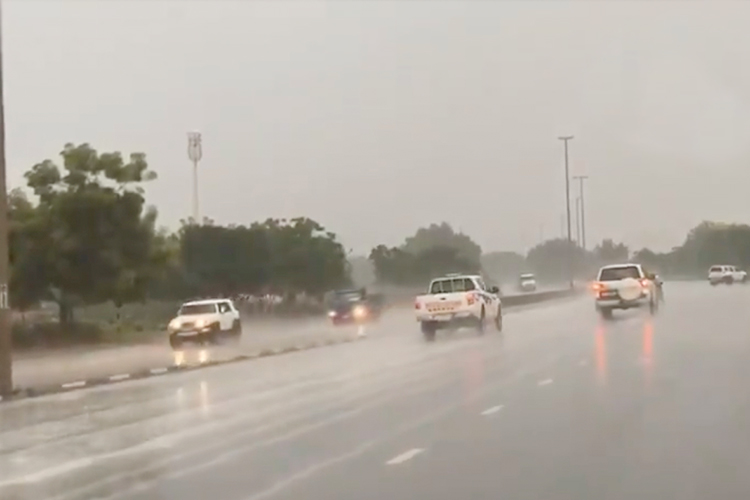 Cars move at a slow pace during heavy rain in Al Ain.

Scattered parts in the country witnessed rainfalls from the early hours until late at night, ranging between light, medium and heavy on Saturday.

This is said to be attributed to the extension of a shallow air depression that extends from the Red Sea coinciding with the extension of an air depression in layers the upper atmosphere, accompanied by a cold air mass from the northwest. This led to the state of air instability, as clouds towered over separate areas of the country and some of them developed into cumulus clouds accompanied by rain.

The eastern and northern mountains of the country are also working on the development of cumulus clouds to be rainy, accompanied by lightning and sometimes thunder.

Some areas in the emirate of Dubai, Sharjah, Fujairah, Ajman, and Al-Twayyen south Ras Al Khaimah witnessed heavy rain, while the Emirate of Abu Dhabi witnessed intermittent rain in Sweihan, Al Falah and a number of areas in Al Ain and Al Dhafra region.

The National Centre of Meteorology (NCM) has expected that the weather on Sunday will be partly cloudy to cloudy at times over the eastern, northern areas and over the sea, associated with rainfall. It is also expected to be humid by night and on Monday morning over some coastal and internal areas. The winds will be light to moderate southeasterly to northeasterly winds, freshening at times, causing blowing dust, with a speed of 20-30, reaching 40km/hr. The sea will be rough to moderate in the Arabian Gulf and in Oman Sea.

The weather on Monday is expected to be fair to partly cloudy and some clouds will appear eastward by afternoon. Humid by night and Tuesday morning over some coastal and internal areas with a probability of mist formation especially westward. Light to moderate southeasterly to northeasterly winds, freshening at times, with a speed of 15-25, reaching 35km/hr. The sea will be slight to moderate in the Arabian Gulf in Oman Sea.

The NMC called on the motorists to exercise caution while driving under the rain, and during the low horizontal visibility caused by raised dust and dirt. It also advised people to stay away from places where water collects and the surface-run-offs.

The lowest temperature recorded by the NCM’s stations on Saturday was 12.1ºC at 7:30 am in Jebel Jais in Ras Al-Khaimah, while the highest temperature was 34.8 ºC in Umm Al Zamoul in Al-Ain at 2:30 pm.