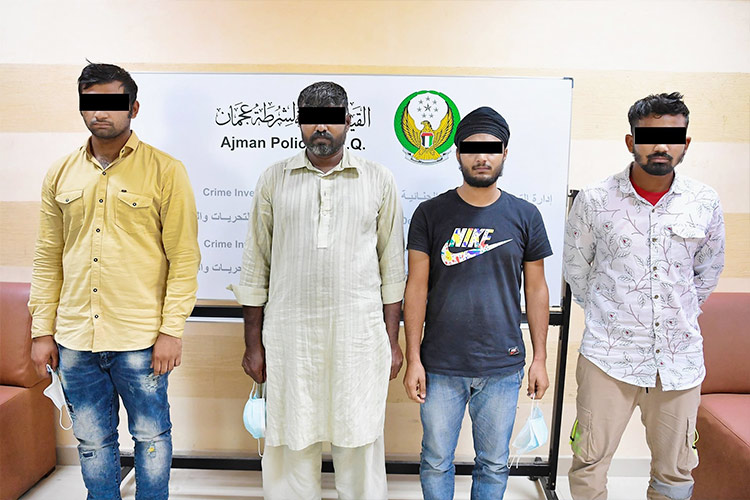 The suspects in Ajman Police custody.

The security teams of the Criminal Investigations Department (CID) at Ajman Police arrested four Asian nationals on charges of murdering an Asian investor in the emirate of Ajman and stealing Dhs100,000. The arrests were made within six hours of the crime. The perpetrators were caught boarding a plane at Dubai airport a few minutes before takeoff.

Lt. Col. Ahmed Saeed Al Nuaimi, Director of the CID at Ajman Police, stated that a report had been received by the operations room indicating that a 32-year-old Asian man had been absent for three days. The caller provided the missing man’s address to the authorities, he added.

Immediately, a police patrol moved to the victim's apartment in Al Rawda area. There was no response from anyone inside the apartment, so the officers had to break open the door after following the necessary legal measures. When they entered, a man was found murdered, Lt. Col Al Nuaimi added.

The CID, the Crime Scene Department, the Public Prosecution and the Forensic Department were instantly notified. After inspecting the scene, it was confirmed that the body belonged to the absent person, and that he was an investor and owner of the building in which he lived.

After six hours of search and investigation, suspicion fell on a number of Asian persons residing in an adjacent apartment in the same building. On taking the necessary legal measures to arrest them, it was found that they were at the Dubai airport attempting to flee the country. In coordination with the Dubai Police and the operations room at the airport, they discovered that three of the suspects were on board a plane intending to leave the country. They were caught minutes before takeoff and brought to the CID of Ajman Police, while the fourth suspect was arrested in Sharjah, in cooperation with Sharjah Police.

After being grilled by the police, they confessed to entering the victim's apartment during his absence, searching it, and stealing Dhs100,000, which they shared among themselves. Then, they waited for him until he entered the apartment and killed him with a knife and fled.

Accordingly, the perpetrators have been referred to the Public Prosecution to complete the legal procedures, Al Nuaimi said.