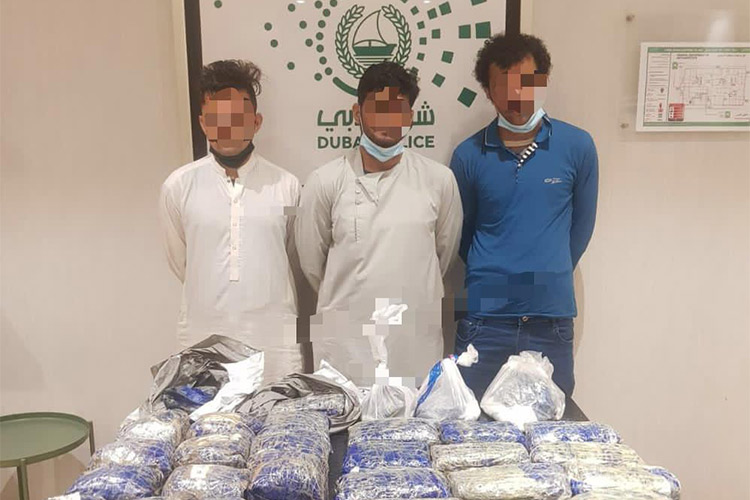 The trio in Dubai Police custody with the seized drugs.

In an operation called ‘step by step’, the Dubai Police arrested an international gang involved in trafficking narcotics and psychotropic substances across borders. The operation led to the arrest of three gang members who sought to promote 33 kilograms of crystal methamphetamine in the country based on the instructions of their leader in an Asian country, who is one of the big heads in the drug trade.

According to lieutenant General Abdullah Khalifa Al Marri, Commander-in-Chief of Dubai Police, the gang was arrested in co-operation with Sharjah Police, adding that the operation came as part of the efforts exerted by Dhabi Police to continuously foil the plots of drug traffickers to peddle drugs to the youth.

Stressing the keenness of Dubai Police on training anti-drug personnel in the methods that drug traffickers might resort to instead of the prevailing traditional methods they used to follow, Al Marri valued the major role that the Department of Anti-narcotics played in co-operation with Sharjah Police, which enabled the gang member to be arrested one after the other.

Brigadier Eid Mohammed Thani Hareb, Director of the Department of Anti-narcotics, confirmed that a tip-off was received that a quantity of narcotics arrived in Dubai and would be hidden by the gang members in a warehouse. After taking the legal measures and obtaining a permission from the Dubai Public Prosecution to arrest the suspects and searching their vehicles, residence and warehouse, the police monitored the movements of the gang members step by step, keeping an open eye on the warehouse for several days.

Later, two of the gang members came to take the narcotics upon the instructions of their leaders, Hareb said, adding that the suspects took out part of the narcotics estimated at 22 kilograms of crystal from the warehouse to a Sharjah industrial area to be hidden until new instructions would be received.

In co-ordination of Sharjah Police, the two suspects were arrested and the narcotics were seized in their possession. They confessed to the charges of possessing narcotics and psychotropic substances for trading purposes.

The work team received another tip-off that a third suspect was there to take the remaining quantity of the narcotics weighing 11 kilograms of crystal. The team kept the warehouse under continuous observation until the third suspect showed up, Hareb said, adding that the suspect took the narcotics and went to Sharjah but was arrested when he arrived there with the narcotics in his possession.

It was found that the gang leader divided the quantity into two parts, the first was supposed to be received by the first and second suspects for peddling against Dhs22,000 and the second by the third suspect, who would deliver to a third person against Dhs3,500, Hareb said.