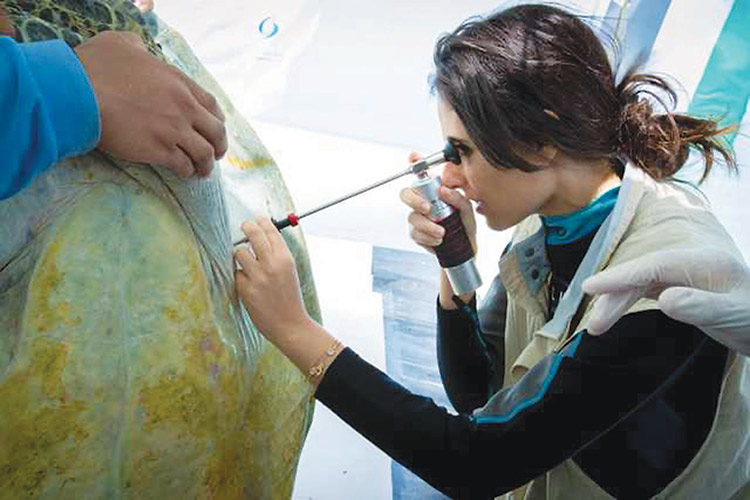 Though COVID-19 has wreaked havoc worldwide, a nature conservation advocate from Abu Dhabi has seen this catastrophe as an opportune time for something constructive and pragmatic, such as man reconnecting with and appreciating nature more than ever before.

The Species Conservation Fund is a “philanthropic endowment” by His Highness Sheikh Mohammed Bin Zayed Al Nahyan, Crown Prince of Abu Dhabi and Deputy Supreme Commander of the United Arab Emirates Armed Forces. It has been supporting them for the non-extinction of approximately 1,400 different species and sub-species, since 2009.

Al Mubarak was interviewed as Gulf Today received a copy of the results of the Species Conservation Fund April to May 2020 online survey to its 2018 to 2020 grant recipients. A total of 323 out of over 400 conservationists from 85 countries out of more than 90, stretching from Argentina to VietNam, completed the questionnaire.

Of the 323, 83 per cent or 268 claimed “the pandemic had affected their critical fieldwork.” Seventy per cent or 226 had their “planned conservation activities postponed or cancelled.”

Al Mubarak said: “We are conservation optimists. We believe strongly in the power of people to make a positive impact in the world. Many of our survey respondents were hopeful that the pandemic might reduce the threats to species and improve their habitats. We have also witnessed improvements in air quality and reductions in greenhouse gas emissions. We know that conservation works and we can see from the effects of the pandemic that change is possible.”

“We just need to make certain that we work together to ensure that as society recovers from the pandemic, so does nature,” she also said.

From the survey, Al Mubarak came up with a “nature recovery plan,” akin to all the local-national-regional-international strategies geared towards economic stimulus packages. These are “investments in protected areas, national parks, conservation and multinational organisations like the International Union for Conservation of Nature that bring people, communities, nations and regions together to apply sound science and policy for the improvement of our natural world.”

Al Mubarak was asked of her take on the man-COVID19-nature-environment interrelationship; for, at the June 5 World Environment Day 2020, United Nations Environment Programme executive director Inger Andersen spoke about the quad interconnection, pointing out that this critical period is a time for reflection.

Al Mubarak mentioned of the wanton destruction of the natural world, that whatever happens anywhere has a consequence to everyone one way or the other, without the need for erudite scientific explanation.

She said: “Half of the world’s population now lives in cities and wildlife is rarely observed. We are reminded that we are neither custodians nor masters of nature. We are but a humble part of it.”

Moreover on stewardship, Al Mubarak added: “Whatever inspires us individually, what is clear now is that we have yet to succeed in highlighting the critical link between nature and our health. Perhaps, it is only now that we are experiencing the magnitude of this connection. The origin of this pandemic and the ensuing socio-economic crisis is ultimately an ecological one.”

Al Mubarak suggested: “Consume less. Walk more. Go meatless Monday or vegan Thursday because livestock emission is one of the world’s greatest sources of greenhouse gas emissions. The UAE has a lot of opportunities for man to reconnect with nature. I urge you take these.”