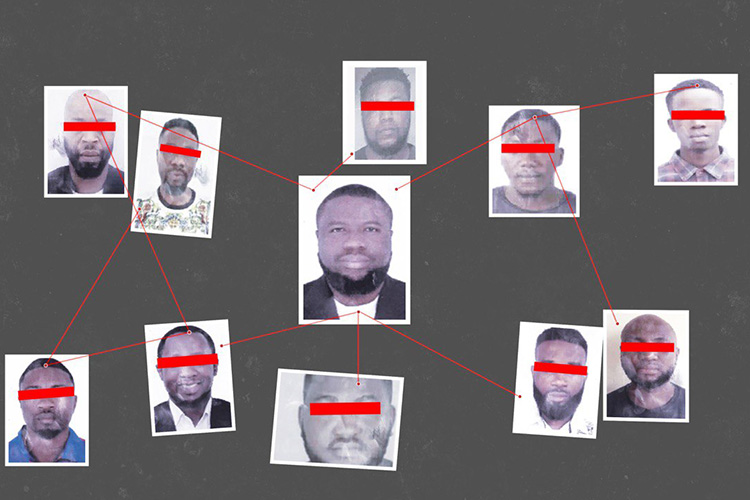 A collage of criminals issued by Dubai Police.

The Dubai Police have recently arrested Raymond Igbalode Abbas, also known as "Hushpuppi" and Olalekan Jacob Ponle aka "Woodberry" along with ten African cybercriminals in a special operation.

Lt. General Abdullah Khalifa Al Marri, the Commander-in-chief of Dubai Police, said the arrest of 'Hushpuppi', 'Woodberry' and ten gang members involved in money laundry and cyber fraud activities, is another achievement added to the proud record of Dubai police in ensuring the emirate's security and safety as well as preserving people's money and property. "Similar to operation 'Fox Hunt 1' that took down an African gang of nine online scammers last February, Op 'Fox Hunt 2' is another painful hit to cybercriminals who try to mess with the world's security and safety," he said.

Asian murderer caught in Dubai in less than 24 hours

The commander-in-chief of Dubai Police also praised the tremendous efforts made by the force's teams who arrested the suspects and mastered the use of modern technologies.

According to Expert Major General Khalil Ibrahim Al Mansouri, Assistant Commander-in-Chief for Criminal Investigation Affairs, the suspects were caught in a series of synchronised raids by six SWAT teams from Dubai Police. "The operation was carried out in a highly professional manner in terms of planning and execution as well as setting a zero hour to take down all gang members in the same time," Al Mansouri said.

Al Mansouri said the operation foiled the gang's bid to deceive many people from around the world and steal their money. He also lauded the efforts of the task force assigned to the case. "The investigation teams at Dubai Police have done a great job in utilising AI-based technologies, including the Criminal Data Analysis Centre at Dubai Police, to track down the cyber fraudsters," Al Mansouri said.

Revealing the operation's details, Brigadier Jamal Salem Al Jallaf, Director of Criminal Investigation Department (CID) at Dubai Police, said that upon receiving the security intel about an African gang involved in money-laundering and cyber fraud, an investigation team was formed to track down the suspects, make the arrest and put an end to the gang's illegal activities that have been badly affecting individuals and companies overseas and targeting their bank accounts and credit cards.

"After verifying available information, the team has started to track the gang including "Hushpuppi", who celebrated his wealth via social media platform, under a businessman façade, in an attempt to lure victims from all over the world," Al Jallaf said.

"The suspects also targeted victims overseas by creating fake websites for well-known companies and banks in a bid to steal victims' credit card information and then launder the stolen money," Al Jallaf continued.

The director of Dubai CID said the raid resulted in confiscating incriminating documents of a planned fraud on a global scale worth AED 1.6 billion ($ 435 million).

Last February, Dubai Police arrested an African gang of nine fraudsters specialised in cyber scam after they had run 81 fake business across 18 countries around the world.

The operation prevented the gang from abusing 800,000 email addresses and foiled their bid to steal Dhs4 billion ($1.08 billion).