VIDEO: Philippine envoy Quintana thanks UAE's leadership and generosity during the pandemic - GulfToday 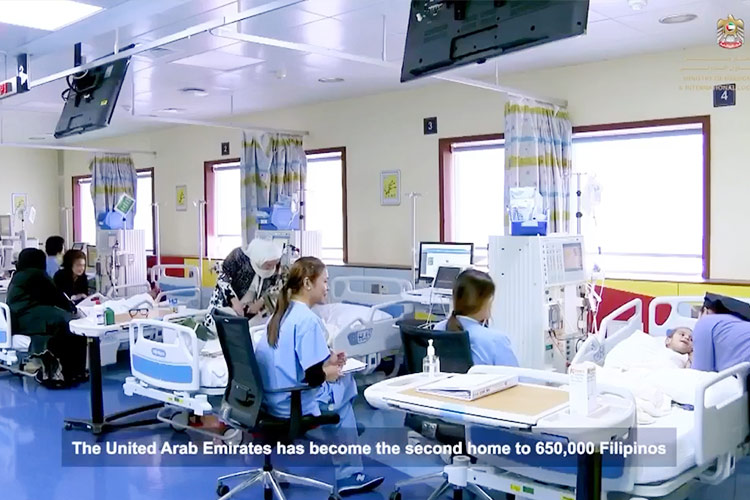 A video grab shows nurses tend to patients at a hospital.

Philippine Ambassador to the UAE Hjayceelyn M. Quintana joined the Diplomatic Community in thanking the host country for its extraordinary leadership and generosity in this pandemic.

In a video produced by the Ministry of Foreign Affairs and International Cooperation (MOFAIC) and the Abu Dhabi Media, Quintana commended the UAE for its global scale response to the crisis.

They said the UAE is a model country in terms of humanitarian assistance. While itself dealing with the pandemic, the UAE has pursued the path of helping other countries, as this is the only way to effectively deal with the contagion. They therefore admire the leaders of the UAE for showing a good vision for all humanity.

The Philippine ambassador said, “The UAE has become the second home of 650,000 Filipinos and they take this as a nation that cares for them.”

The Philippines was among the countries which received boxes of personal protective equipment for frontliners from the UAE.

The MoFAIC-produced video has been posted over the Facebook page of the Philippine Embassy and has garnered hearty reactions on Saturday.

"We think we are an instrument of hope to give spiritual, mental and emotional support also to our patients in time of despair. That’s why when Abu Dhabi’s Crown Prince personally appreciated me, I felt he was recognising all nurses for spreading hope," said Jessa Dawn Ubag, 31, a staff nurse at Infectious Disease Unit at Rashid Hospital in Dubai.

She was sharing her experience with Emirates News Agency, WAM, about her video conference with His Highness Sheikh Mohamed bin Zayed Al Nahyan, Crown Prince of Abu Dhabi and Deputy Supreme Commander of the UAE Armed Forces, in the third episode of the Sheikh’s virtual majlis on 13th May.

Sheikh Mohamed appreciated all the frontline medical workers for their sincere efforts to contain COVID-19.

"His words have inspired me and my fellow nurses to spread more hope to patients and community at large. We nurses felt that somewhat are heroes in our own small way. It has inspired me to be a better nurse and a better instrument of hope," said Ubag who has been working at Rashid Hospital for six years.