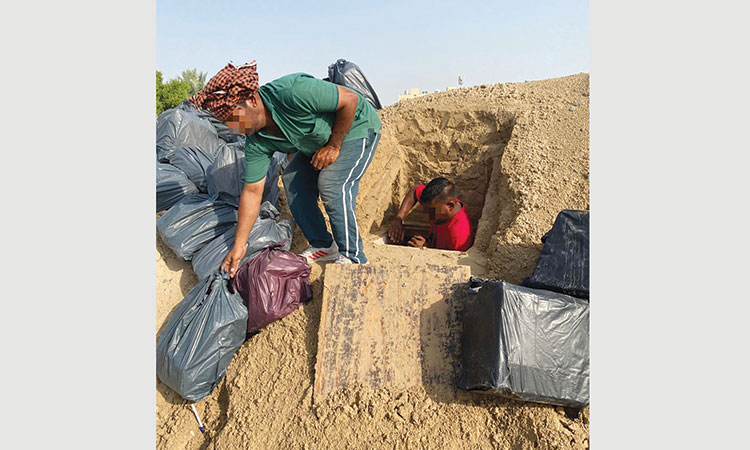 Police teams reportedly found 1,483 bottles of wine in the possession of the suspects, during three tasks, the most prominent of which was the discovery of a pit intended for storing alcoholic beverages in a desert area.

Brigadier Dr Adel Mohamed Al Suwaidi, Director of the Jebel Ali Police Station, affirmed that during the Eid Al Fitr holidays, Dubai Police stations intensified their patrols to enhance security and safety, and follow up on negative behaviour in the areas of jurisdiction to monitor security gaps and prevent crime in all its forms. He added that the move, which came under the directions of Lieutenant General Abdullah Khalifa Al Marri, Commander in Chief of Dubai Police, and a direct follow-up by Major General Expert Khalil Ibrahim Al Mansouri, Assistant Commander in Chief for Criminal Investigations Affairs, aimed also at tracking and arresting perpetrators.

Brigadier Adel Mohammad Al Suwaidi, chief of the Jebel Ali Police Station, explained they discovered a pit for storing alcoholic beverages by a patrol while carrying out its tasks.

Al Suwaidi added the patrol team saw 3 Asians carrying alcoholic beverages out of a wooden box hidden in a pit. The team arrested them red-handed.

Al Suwaidi indicated that the patrol team found 24 plastic bags containing 1,110 alcoholic bottles in a hole, indicating that one of the arrested violated the nationality and residency laws in the country.

During another mission, two Asian men were arrested carrying alcoholic beverages in their car.

Al Suwaidi explained the Command and Control Centre received a tipoff on Monday alerting that a problem occurred in the jurisdiction, and a patrol rushed to the scene where they saw a vehicle with two men. When the police attempted to stop it,  they did not respond and tried to flee. The patrol followed the car and after several attempts stopped it and arrested the two suspects. Al Suwaidi affirmed there were 115 cans of alcoholic beverages of two different types in the vehicle.

He also indicated that during a mission in the first industrial area to combat random markets and negative phenomena, a police patrol suspected a salon vehicle with two Asian men, so the vehicle was stopped and searched. The patrol team reportedly found 258 bottles of liquor of two different types.

Official records indicate that the defendant took advantage of the situation and sexually assaulted the drunk woman. The victim furiously slapped the defendant after the incident, and immediately alerted security guards at the club.