VIDEO: 41 killed as PIA plane with 99 onboard crashes into residential area in Karachi - GulfToday 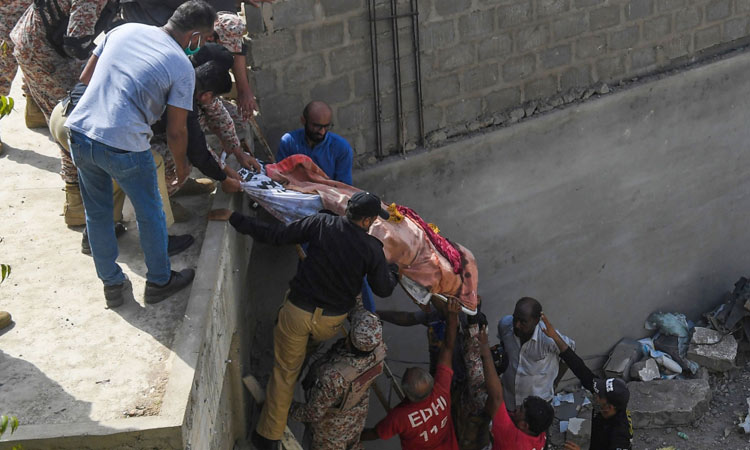 Rescue workers move a body from the site after the crash at a residential area in Karachi on Friday. AFP

A passenger plane with 99 people on board crashed in a crowded neighbourhood on the edge of the international airport near Pakistan's port city of Karachi on Friday after what appeared to be an engine failure during landing.

At least 41 people are confirmed to have been killed in a plane crash in a residential area of Karachi, Pakistan International Airlines' (PIA) chief executive said on Friday.

The Airbus jet with 99 people on board crashed while approaching the airport. Two passengers are known to have survived.

He said Pakistan's independent safety investigations agency would inquire into the crash.

Images aired on national television showed the PIA flight had smashed into a residential area, with clouds of thick black smoke billowing from the site. 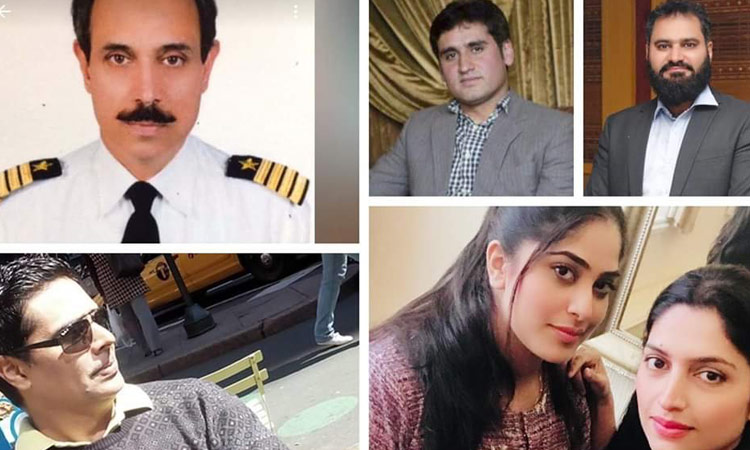 A PIA's pilot and some passengers of the ill-fated plane.

Mayor Wasim Akhtar said at least five or six houses were destroyed in the crash of the domestic flight operated by PIA. He said all those on board died, but two civil aviation officials later said that at least two people survived the crash. They spoke on condition of anonymity because they were not authorized to brief media.

Local TV stations reported that three people sitting in the front row of the aircraft survived and aired footage of a man on a stretcher they identified as Zafar Masood, the head of the Bank of Punjab.

They reported that at least 11 bodies were recovered from the crash site and six people were injured. It was not immediately clear if the casualties were passengers.

The airport in the northeastern city of Lahore, where the flight originated, initially said there were 107 people on board. The civil aviation authority later said the plane carried 91 passengers and seven crew members. Spokesman Abdul Sattar Kokhar said the discrepancy was due to confusion in the chaotic aftermath of the crash.

"Shocked & saddened by the PIA crash. Am in touch with PIA CEO Arshad Malik, who has left for Karachi & with the rescue & relief teams on ground as this is the priority right now," tweeted Prime Minister Imran Khan. "Immediate inquiry will be instituted. Prayers & condolences go to families of the deceased."

Chief of Army Staff General Qamar Javed Bajwa condoled over the loss of lives in the plane crash. The army chief directed the provision of full assistance to the civil administration in rescue and relief efforts.

Bajwa said the PM has directed mobilisation of all resources for relief operations.

Video circulated on social media appeared to show the aircraft flying low over a residential area with flames shooting from one of its engines.

"The plane crashed in Karachi. We are trying to confirm the number of passengers but initially it is 99 passengers and eight crew members," said Abdul Sattar Khokhar, the spokesman for the country's aviation authority, adding that the flight was coming from Lahore.

Khokhar added that the aircraft was an Airbus A320 and was en route to Karachi. 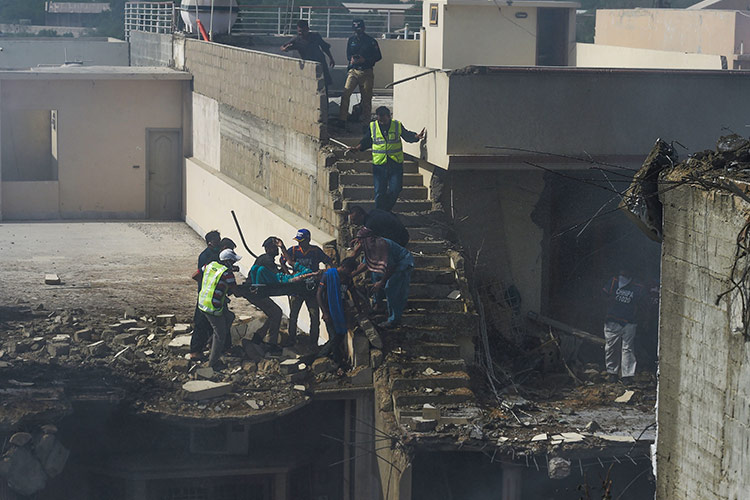 Rescue workers evacuate an injured victim from the site of crash in Karachi on Friday. AFP

Police wearing protective masks struggled to clear away crowds to allow a firetruck and an ambulance to move through the narrow streets toward the crash site, the air filled with dust and smoke. Police and soldiers cordoned off the area.

A transmission of the pilot's final exchange with air traffic control, posted on the website LiveATC.net, indicated he had failed to land and was circling around to make another attempt.

"We are proceeding direct, sir - we have lost engine,” a pilot said. "Confirm your attempt on belly,” the air traffic controller said, offering a runway.

Pakistan had resumed domestic flights earlier this week ahead of the Eid Al Fitr holiday marking the end of the Islamic fasting month of Ramadan. Pakistan has been in a countrywide lockdown since mid-March to try to stem the spread of the coronavirus.

Witnesses said the Airbus A320 appeared to attempt to land two or three times before crashing in a residential area near Jinnah International Airport. The residential area on the edge of the airport, known as Model Colony, is poor and heavily congested.

The Pakistan military later tweeted that security forces had been deployed to the area and helicopters were being used to survey the damage and help ongoing rescue operations.

It comes just days after the country began allowing commercial flights to resume after planes were grounded during a lockdown over the coronavirus pandemic. 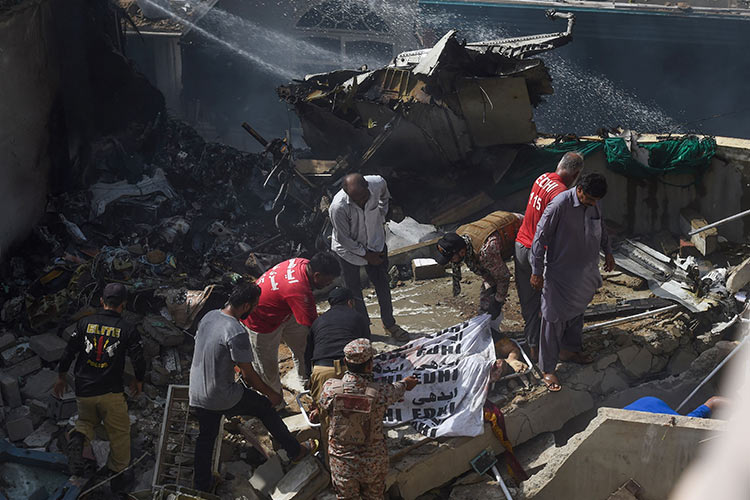 Rescue workers cover the body of a victim they recovered from the rubbles at the crash site in Karachi on Friday. AFP

Pakistan has a chequered military and civilian aviation safety record, with frequent plane and helicopter crashes over the years.

In 2016, a Pakistan International Airlines plane burst into flames after one of its two turboprop engines failed while flying from the remote northern to Islamabad, killing more than 40 people. 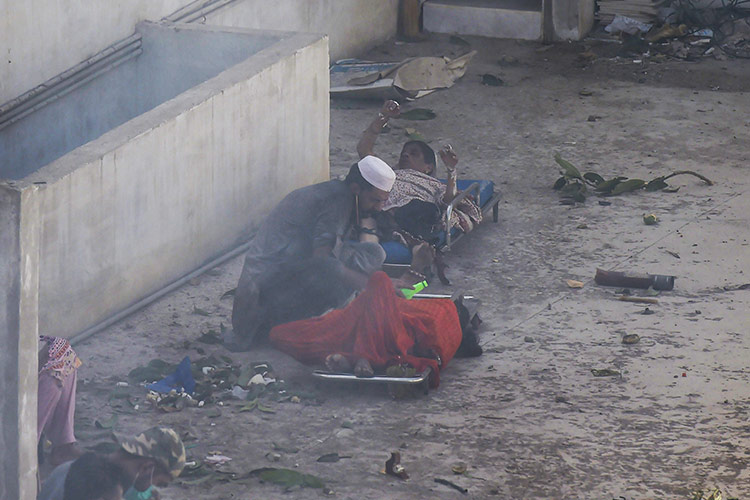 A man helps injured victims after a PIA flight crashed in a residential neighbourhood in Karachi on Friday. AFP

A resident of the area, Abdul Rahman, said he saw the aircraft circle at least three times, appearing to try to land before it crashed into several houses. Airworthiness documents showed the plane last received a government check on Nov. 1, 2019. PIA’s chief engineer signed a separate certificate April 28 saying all maintenance had been conducted. It said "the aircraft is fully airworthy and meets all the safety” standards.

Ownership records for the Airbus A320 showed China Eastern Airlines flew the plane from 2004 until 2014. The plane then entered PIA’s fleet, leased from GE Capital Aviation Services.
Perry Bradley, a spokesman for GE, said the firm was "aware of reports of the accident and is closely monitoring the situation.”