Filipino family fights coronavirus with all its might - GulfToday 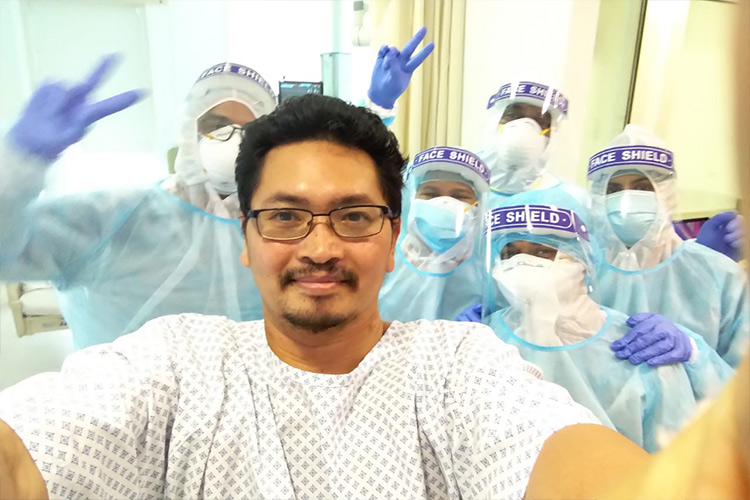 Angelito B Pangilinan Jr., 38, with the medical team. He had tested positive for the viral infection in April.

Rhea Almazan Pangilinan, 37, couldn’t hold back tears rolling down her cheeks. Despite trying hard, she broke down several times opening up about the poignant experience of her family fighting COVID-19. She and her husband, Angelito B Pangilinan Jr., 38, had tested positive for the viral infection in April while their seven-year-old daughter stayed separate at home with the nanny.

Though Rhea was in isolation at home and recovered early, Angelito was critical. He has just bounced back to life after fighting COVID-19 in a ventilator for 16 days. Residing in Dubai for over 13 years now, this is the first time the family had to pass through a trying experience.

The family has no clue how they contracted the virus. It was Angelito who showed signs of illness at first.

“He had a sore throat. But was hesitant to go to a hospital. In a few days, he manifested more symptoms. I asked him to consult a doctor then,” said Rhea.

Angelito went to VPS Medeor Hospital on March 30, a week after he had started showing symptoms. He was soon admitted and given oxygen support. “By that time it had become difficult for him to breathe,” she added.

But in a day, Angelito’s condition completely worsened. “The next day, I got a call from the hospital that they are intubating him. I was scared. I spoke to the doctor who informed that Angelito’s lungs have been severely infected. Both his lungs were affected by pneumonia,” said Rhea with her eyes welling up.

She said the family was extra cautious since the outbreak and never ventured out except for work.

“Angelito never even took public transport. He used to drive to work. It was I who used to take the metro,” she added.

It was almost sure that Angelito was infected by COVID-19. Confirming the doubts, his results came positive on April 4. Following which the entire family gave their samples for testing.

“I was informed that the chances for us to get infected were high. The results came after a few days. As I had prayed, only I was tested positive. During the period, I was very cautious and never touched my child. I also reconfirmed the test of my child by giving her samples for the second time,” said Rhea who was in home isolation as she suffered no major symptoms.

“I knew Angelito was on ventilator support. But I always texted him to be strong and brave. I couldn’t do anything else. But I was astonished to see how brave my child was,” said Rhea.

Just seven years old, Ayah Pauline Pangilinan has shown immense courage and behaved with maturity. “She never cried knowing papa and mama were ill. She understood that I couldn’t touch her. So, she would come near me and act like hugging me. I would also do the same. She also wrote notes asking me to stay strong and eat healthy food. She prayed in the morning and night kneeling on her bed.”

Rhea recollected a shocking experience when Ayah asked her whether Angelito would die. “She asked this straight to my face. But then she told me why I am worried when there is God to protect us. I was overwhelmed with joy,” she said.

Angelito was shifted to the room after 16 days on ventilator support. “I was extremely happy. But he behaved as if he had a memory loss. It was frightening. He asked me why I am sending messages while at work. It took him about five days to get back to his normal sense. The doctor said it was normal as he had spent a long time in the ventilator,” she added.

Discharged from the hospital, Angelito said he is very happy and thanked doctors and nurses at VPS Medeor Hospital for taking care of him. “I am extremely grateful to them for saving my life,” he added.

The Ministry expressed its sincere condolences to the families of the deceased and wished current COVID-19 patients a speedy and full recovery.