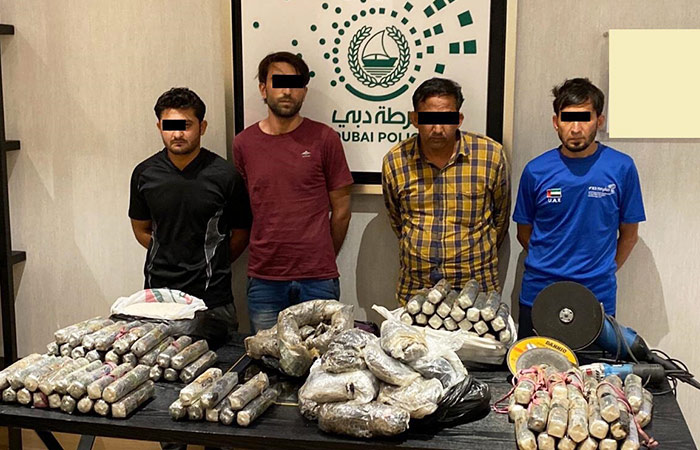 The gang of four that were arrested by Dubai Police.

In an operation called Tatheer or “Cleansing”, the Dubai Police thwarted the promotion of 59 kilogrammes of Heroin and Crystal possessed by an Asian gang of four suspects who tried to take advantage of the current COVID-19 precautionary measures to promote their toxins.

Lt. Gen. Abdullah Khalifa Al Marri, the Commander-in-chief of Dubai Police, praised the intensive efforts made by the General Department of Anti-Narcotics in fighting drug trafficking and maintaining the safety and security of the UAE community.

He stressed that the seizure was carried out with sophisticated planning and high professionalism.

“The operation highlights the great potentials our officers possess, as they managed to closely monitor the gang’s movements from the moment the relevant department received the security tip about the gang’s criminal activity until the zero-hour and the raid” Lt. Gen Al Marri said.

The Commander-in-chief of Dubai Police clarified that the operation was crowned with success due to several factors, including the Dubai Police’s keenness to implement the directives of Lieutenant General Sheikh Saif bin Zayed Al Nahyan, Deputy Prime Minister and Minister of the Interior, who has always called national forces to shield the Emirati community against those who try to flaunt or take advantage of the COVID-19 precautionary measures to promote narcotic drugs.

Lt. Gen Al Marri also linked the success of the operation to the careful planning put to arrest the gang members in flagrante delicto, and the efforts exerted by Dubai Police’ investigation team who monitored the gang’s movements and closely tracked the vehicles used to promote toxins around the clock and for more than 12 days.

Lt. Gen Al Marri extended his thanks to Expert Major General Khalil Ibrahim Al Mansouri, Assistant to the Commander-in-chief for Criminal Investigations Affairs at Dubai Police, for his thorough follow-up of the various details and facts of the operation, and to Brigadier Eid Muhammad Thani, Director of the General Department of Anti-Narcotics at Dubai Police, for his sincere efforts in combating drugs and protecting our society. Lt. Gen Al Marri also lauded the role of the investigation and control team who worked on this operation with skill and competence.

Expert Major General Khalil Ibrahim Al Mansouri revealed that the General Department of Anti-Narcotics at Dubai Police had received a reliable security tip-off about the gang members who attempted to the take advantage of the current circumstances and of the COVID-19 precautionary measures, to promote their toxins among our youth.

Maj-Gen Al Mansouri added that the watchful eyes of Dubai Police had hunted the gangs’ dream to promote drugs among members of society.

“The Anti-narcotic team successfully arrested the criminals in a timely manner and seized 59kgs of illegal drugs; including 26kgs of heroin and 33kgs of crystal,” Maj-Gen Al Mansouri said.

“A skilled team immediately started investigating the suspect. After verifying his suspicious activity, the dealer and his accomplices were put under constant surveillance for 12 days before the arrest took place. During this period, all gang members were identified as well as all vehicles they used to deal drugs and to divert and disguise their illegal activities”, Brig. Thani added.

Brig Thani said “At the zero-hour, Dubai Police busted the criminals as they were transporting the drugs and arrested their gang leader and his assistant and seized what they had in possession. The other two suspects were arrested in front of their residence in Dubai.”

All suspects admitted to their crime and have been referred to prosecution for further legal action.

Recently, the Anti-Narcotics Department at the Dubai Police arrested a young Asian after he posted a video on social media of him abusing heroin and challenging the security authorities.
After seizing the accused, further legal actions were taken against him, followed by the referral to the judicial authorities.

According to Brig. Eid Mohammad Thani Hareb, Director of the Anti-Narcotics Department, the competent teams acted as soon as the video clip spread on social media sites. They were able to locate and arrest the accused within hours and then he referred to the competent authorities to take the necessary measures against him.

“The social media websites are not platforms to show off indecent behaviors,” Hareb said.

He called on members of the community not to share such videos for their risk on health and life of people.