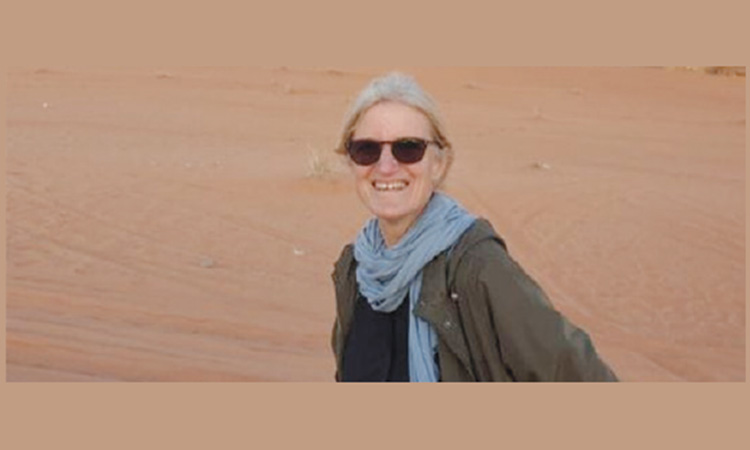 Wendy Hawking poses for a photograph during a desert safari trip in Dubai.

The tourist, Wendy Hawking (55 years), said in a message to the UAE authorities that she did not expect the health care system in the UAE to be at such a distinguished level, noting that she had recovered from the virus thanks to the early detection and the perfect medical treatment of her infection.

In her message, she said, “I left London Heathrow airport without being examined, and arrived at Dubai Airport (transit), where my temperature was monitored high. Therefore, I was transferred to Prime Hospital next to the airport, where subject to the Covid-19 test, before I was isolated.”

She continued, “The results appeared positive, so I was immediately admitted to the hospital’s quarantine ward, where the medical treatment started immediately. I was shocked by the results, as we had no idea that the infection ratio in Britain was high. ”

“I spent 11 days at Prime Hospital in Dubai, and I did not suffer from shortness of breath because the virus did not reach the lower respiratory tract or lungs due to the rapid medical intervention,” she added.

“The doctors at the Prime Hospital gave me medication for symptoms that are somewhat similar to the flu, but 10 times worse. I was suffering from severe headache, and so exhausted as I climbed a mountain. And even eating a little thing from breakfast was requiring me tremendous effort. I had severe nausea and loss of appetite. And when I was unable to eat, I was put on a fluid treatment equipment,” she added.

Wendy pointed out that the health care she was receiving around the clock and the positive spirit of doctors and nursing staff contributed to her rapid recovery from the virus.

The tourist continued, “After recovering, I had three tests, all of which were negative, so I left Prime Hospital and went to a quarantine in a hotel room.”

“I am still in a strict quarantine and do not meet anyone, I do not leave my room, order my needs online, and communicate with my family in Melbourne by phone,” she added.

Wendy further advised anyone has any flu-like symptoms to take it seriously and should visit the nearest hospital ASAP.

“I have recovered from Covid-19 because of the excellent healthcare I received early. It is also necessary to adhere to self-isolation if you suspect that you have the virus to break the infection chain, and contact the nearest hospital,” she concluded.

The Committee has also decided to reduce the validity period of PCR tests from 96 hours to 72 hours.

The Dubai Health Authority (DHA) has included new categories of people who can book an appointment for vaccination.

VIDEO: Here is how you can get COVID-19 vaccine at home in UAE

This comes as part of the Ministry’s painstaking efforts to maintain the health and safety of elderly people and to spare them the hassle of commuting to vaccination centers.