VIDEO: Now rent a pedal assisted bike at over 78 stations across Dubai - GulfToday

VIDEO: Now rent a pedal assisted bike at over 78 stations across Dubai 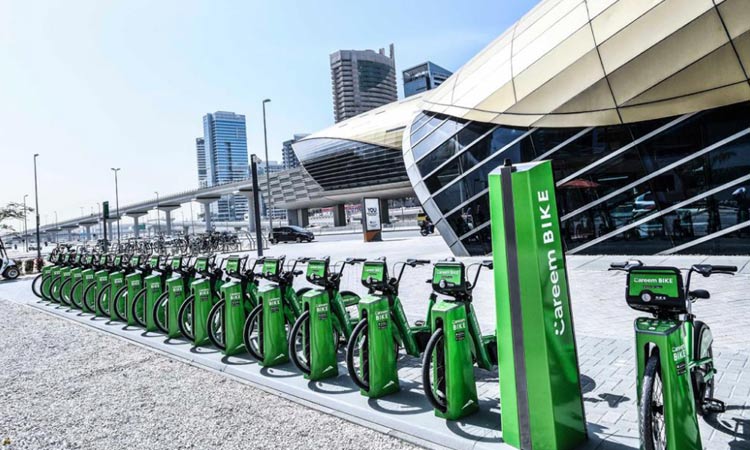 A number of bikes seen at a bike station in Dubai.

Dubai’s Roads and Transport Authority (RTA) and Careem officially launched the first-of-its-kind bike sharing service in the region, providing 780 pedal assisted bikes over 78 stations across Dubai under the project’s phase 1.

Mattar Mohammed Al Tayer, Director General and Chairman of the Board of Executive Directors of the RTA and Mudassir Sheikha, Co-Founder and CEO of Careem, accompanied by Ahmed Bin Sulayem Executive Chairman of Dubai Multi Commodities Centre, inaugurated the service at the Jumeirah Lakes Towers’ station.

A number of executives from both sides attended the inauguration event.

A leader in technology across the Middle East and North Africa, Careem relies on the latest smart systems to track their bicycles via GPS and anticipate the locations in high occupancy areas.

The solar-powered stations will allow users to hire and pay via the Careem Bike app, which allows them to unlock the bicycle by scanning the QR code on the bicycle and enter a 5-digit code from the application into the station.

Covering numerous busy areas across the city, such as Dubai Marina, Jumeirah Beach Road, Jumeirah Lake Towers, The Greens, Barsha Heights, Dubai Water Canal, Dubai Media City, Downtown Dubai and Al Qudra, in addition to a number of safe roads across Al Karama and Al Mankhool, the service allows a top speed of 30 km/h, which is a safe speed, whether on the bicycle dedicated tracks or on the safe roads that are covered by the service. 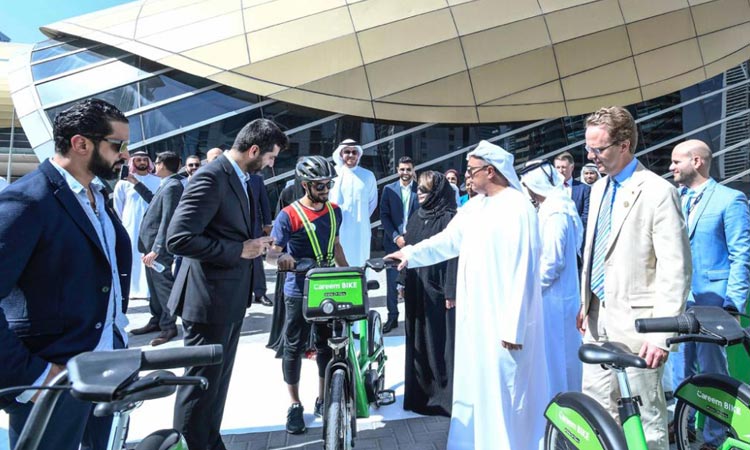 Officials inspect bikes at one of the bike stands in Dubai.

According to its 15-year contract with the RTA, Careem will operate 1,750 bicycles and install 175 stations during the first two years, before increasing them to a total of 3,500 bicycles and 350 stations over the next five years.

Within its strategy to meet the highest traffic safety standards across the Emirate of Dubai and reduce fatality, injury and accident rates, RTA approved the bike sharing service following extensive studies, in order to offer solutions to the first and last-mile connections and promote a traffic safety strategy that will help achieve zero road deaths across Dubai.

To ensure the safety of bike sharing users, the RTA has called upon cyclists to adhere to the Emirate's laws and regulations, namely the Executive Council’s law 10/2015 and the executive resolution 468/2019, which prohibits the use of bicycles on roads that have a top speed of 60 km/h or more and dictates cyclists to get off their bicycles when on a crosswalk, wear a protective helmet and a reflective vest, sit only on the bicycle seat, ride on the right side of the bicycle track, refrain from grabBing a moving vehicle and abstain from parking their bicycles in a manner that could hinder pedestrians or vehicles.

The regulation also states that cyclists must keep a safe distance from vehicles and pedestrians, refrain from carrying anything that could destabilize the bicycle, adhere to all road/track signs, refrain from using two-ear headsets, cycle only with traffic- not against traffic and make sure that their bicycle is road-worthy and meets safety requirements.

According to the regulation, bicycles shall not be rented to or used by children under the age of 15, unless accompanied by an adult 18 or older.

Al Tayer was pleased to launch the bike sharing service, which meets the directives of His Highness Sheikh Mohammed Bin Rashid Al Maktoum, Vice President and Prime Minister of the UAE and Ruler of Dubai, to improve the quality of life in the emirate. It also falls under the directives of His Highness Sheikh Hamdan Bin Mohammed Bin Rashid Al Maktoum, Crown Prince of Dubai and Chairman of The Executive Council, to provide suitable alternatives that encourage Dubai’s people to exercise and ride bicycles.

Al Tayer said: “This service contributes to Dubai sustainability efforts and encourages residents and tourists to enjoy an active and healthy life, providing them with a new transportation option that will improve mobility across the city. The service supports RTA's efforts to create an integrated ecosystem that offers different transportation means, as it supports a vehicle-free flexible model and integrates within daily transportation services, using a safe and comfortable approach. This falls under the efforts made by the Government of Dubai to reduce energy consumption and pollution, provide a healthier and happier environment and offer short (first mile and last-mile) connection service that helps public transportation users reach their final destinations.”

Mudassir Sheikha, CEO and Co-Founder of Careem, said: “We are pleased and excited to launch the first-of-its-kind multi-phase programme in the region. We extend our gratitude to all community stakeholders who played a significant role in supporting the initiative and helped us provide our services to the residents and the visitors alike.”

He added: “We appreciate the great efforts made by the RTA to bring success to this project, while we value the contributions of our partners at Wasl Properties, Emaar, Dubai Multi Commodities Centre (DMCC), TECOM and Dubai Holding Communities, who helped transform this project into a reality.”