Yemen patients finally treated in Jordan after years of war 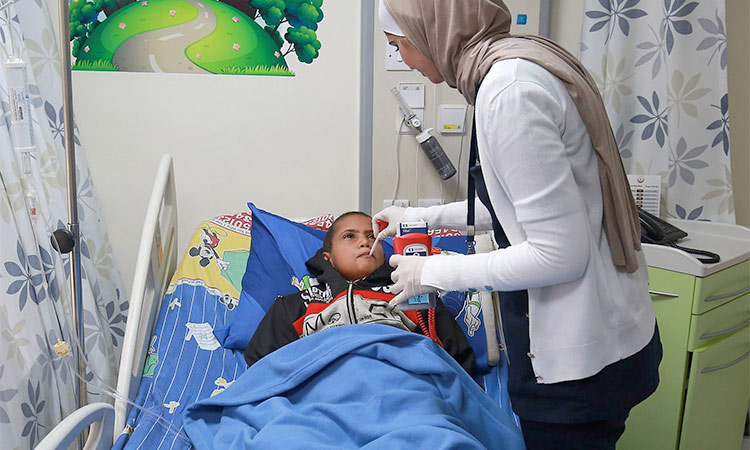 Mohammed Hussein looks sadly at his wife as she lies in bed in a Jordanian hospital where she is being treated for cancer — far from the devastating war back home in Yemen.

Dawla, too sick to talk, is one of a handful of critically ill Yemenis transported by the United Nations from the rebel-held capital Sanaa to Jordan for treatment.

A year and half ago, Yemeni doctors diagnosed the 40-year-old with thyroid cancer. 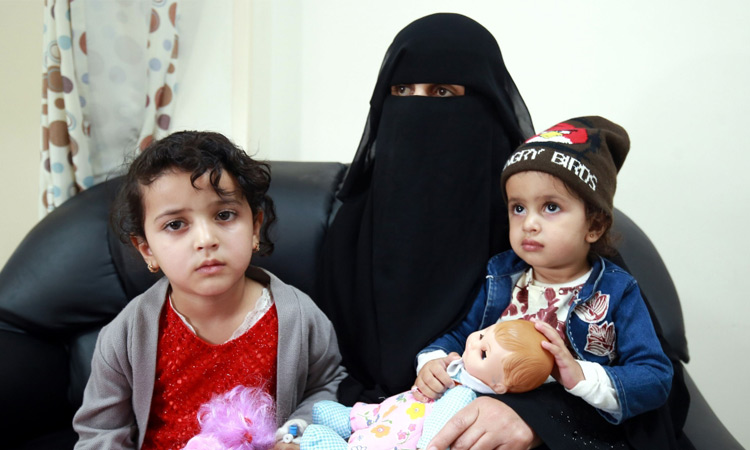 Manal sits with her mother and sister at a private hospital in Amman. AFP

The news was devastating, more so given the state of the health system in a country rocked by a war the UN says has caused the world’s worst humanitarian crisis.

“They told us she had had the disease for about four years,” said Hussein, a 50-year-old farmer from Hajja, northwest of the capital.

“We couldn’t get her treated in Yemen because of the war, the siege, the lack of medical personnel and treatment, and I couldn’t take her outside the country because I could barely afford to feed our six children,” he said with tears in his eyes. “Life in Yemen is harder than you can possibly imagine.” 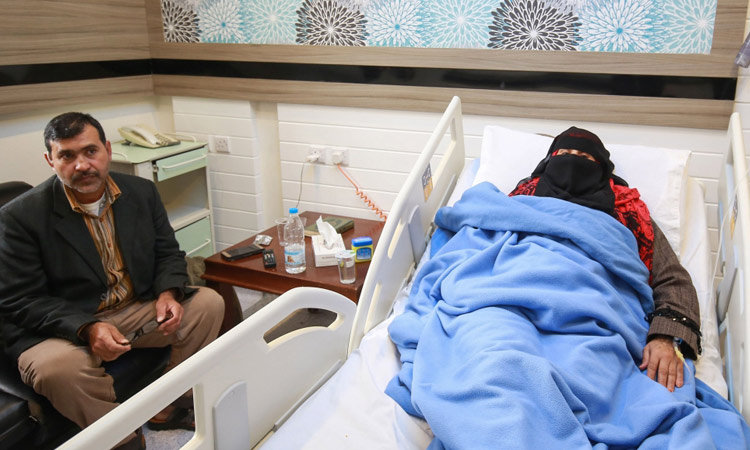 Mohammed Hussein sits next to his wife Dawla at a hospital in Amman. AFP

The couple waited four months in a small hotel in Sanaa before they could leave Yemen.

They arrived in Amman on Feb.8, on a flight from Sanaa airport organised by the World Health Organisation and carrying 24 patients, including children.

It was the second of what the UN agency hopes will be many “mercy flights.”

Houthi rebels have controlled Sanaa since 2014, when they seized much of the country’s north from the government of President Abedrabbo Mansour Hadi. 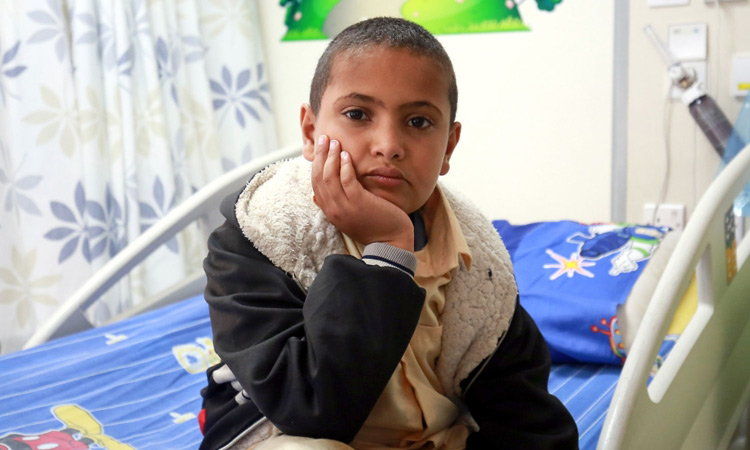 Aymen sits on a bed as he waits for treatment at a hospital in the Jordanian capital Amman. AFP

In another ward of the same Amman hospital, 10-year-old Aymen was accompanied by his father Waheeb as he waited for treatment for a congenital spinal malformation.

He was set to have his operation later this month, a procedure doctors say is “big” and could last eight hours.

“My son has been suffering since he was six years old,” the father said. “We’ve been to many doctors. They would tell me: we can’t do this operation in Yemen, you have to go overseas.”

Waheeb, a 40-year-old builder originally from Taiz in southwestern Yemen, left his wife and his other children back at home to bring Aymen for treatment.

“I hope the war ends soon so life can get back to normal. We’re tired,” he said. 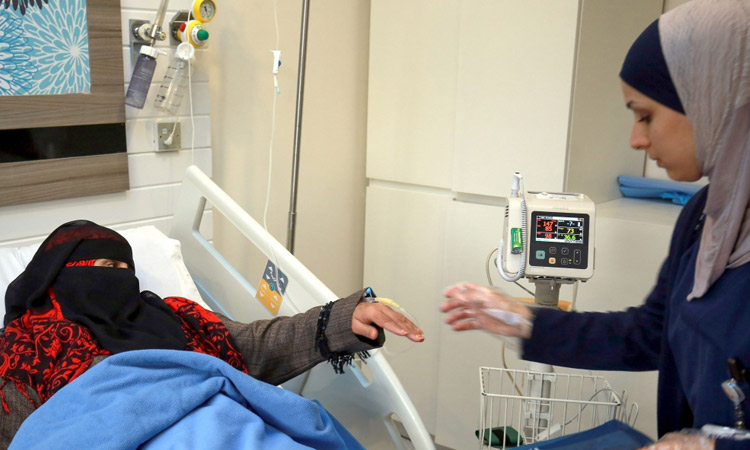 “Most of them need surgery because they have not received proper medical treatment in the past, which has complicated their cases,” he said.

WHO spokeswoman Inas Humam said the organisation was covering the costs of their medical treatment, transport and accommodation.

“These are innocent Yemenis, they don’t deserve to suffer because of what is happening in Yemen and because of the war,” she said.

“It’s our duty, as WHO and UN and as an international community, to make sure that they get the lifesaving care that they need until a political solution to the crisis is found. “This is their one and only hope of survival.”

Nadia, from Amran province north of the capital, held the hands of her two daughters, five-year-old Manal and Maria, two.

Manal is due for an operation on her right arm, which she has been unable to move since birth.

“The hospitals back home have been destroyed because of the war,” the mother said. “There are hardly any doctors and barely any medicines. “But this trip has given us a little bit of hope.”

Many of the country’s hospitals have been damaged or destroyed.

Last year, dozens of injured Yemenis completed treatment in Indian hospitals at the expense of the United Arab Emirates. 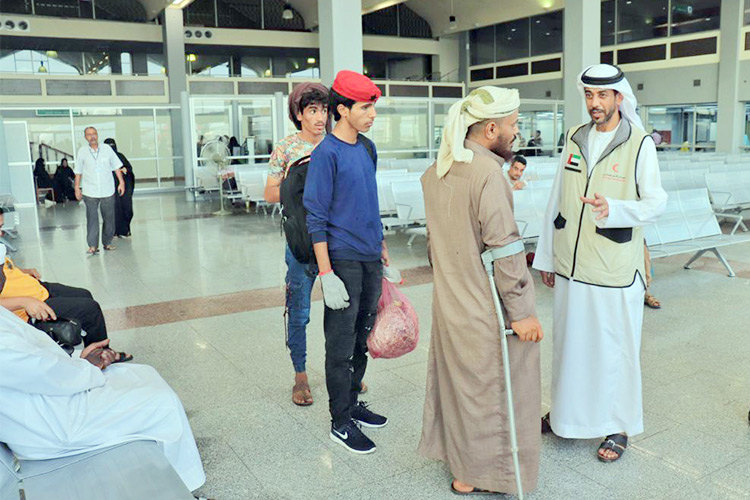 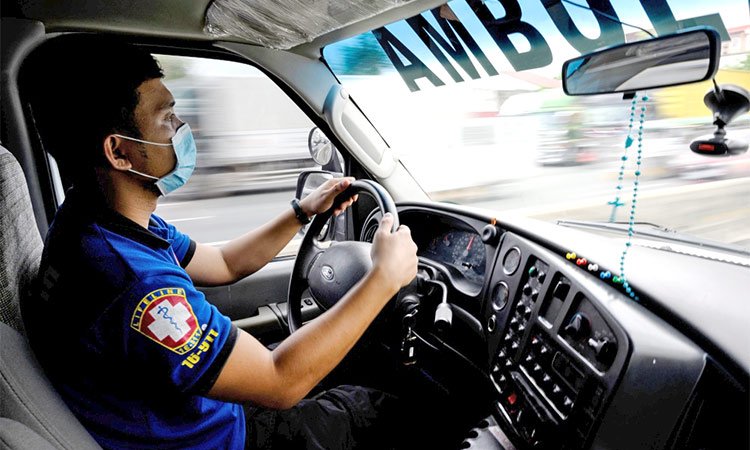 Special lanes for emergency vehicles are not enforced, the infrastructure is outdated, and local drivers are often unwilling or unable to make way — a situation experts say is causing patients to die en route.

A nurse wearing a face mask comes to an abrupt stop at a yellow line on the floor marking the start of the area of the hospital deemed "dirty" or contaminated because it's where the infected patients are treated.