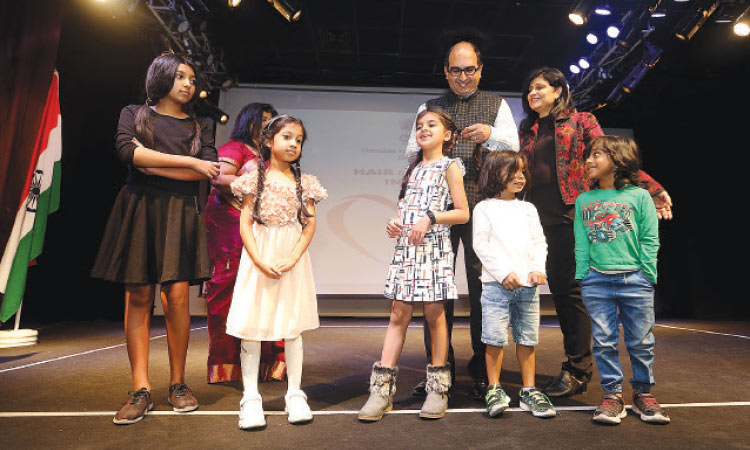 Vipul cuts the hair of a young donor to mark the occasion. Kamal Kassim / Gulf Today

More than 30 women and young children, both boys and girls, donated their hair to make and distribute wigs for cancer patients at an event hosted by the Consulate General of India in Dubai, in association with Hair for Hope India, on Tuesday to mark the World Cancer Day. Many others also pledged to donate their hair towards the cause.

Among the donors were children as young as four-year-old Mohammad Arham and six-year-old Dia Malpani to teenagers Syona Srivastava and Devavartha Suresh Kumar, who stressed that this is the least they could do to help cancer patients.

Premi Mathew, Founder and CEO of Hair for Hope India, said that the hair donation event was also aimed at raising awareness about life after diagnosis of cancer and spreading positivity among the patients and their families. Premi Mathew and six other cancer survivors, who have beaten the odds, also shared their experience and told the audience that cancer is not a ‘death sentence’.

Gool Sher Navdar said, “One should never lose hope. Diagnosis of cancer does not mean it is end of life, it is the beginning of a new life. I am much more healthier, happier now.” Priyanka Gupta suggested to face it with positivity.

“Determination and positivity give success in life. Look forward with faith. I am a golfer and want to show the world how to fight,” she added.

Nisreen Arsiwala echoed, “Fight cancer, don’t fear cancer. I would also suggest that one should not care about losing hair, because life shines through smiles, not through hair.” Consul General of India in Dubai Vipul cut hair of a young donor to mark the occasion. He said that hair donation is big thing for both, donor and receiver. He appreciated donors for growing hair for years with sole aim to donate for humanity as it is important for self-esteem of many patients who think that they should have hair.

Premi Mathew said that the hair will be donated to Friends of Cancer Patients, a non-profit society for the support of cancer patients in Sharjah, to support the noble initiative of making and distributing wigs for cancer patients.