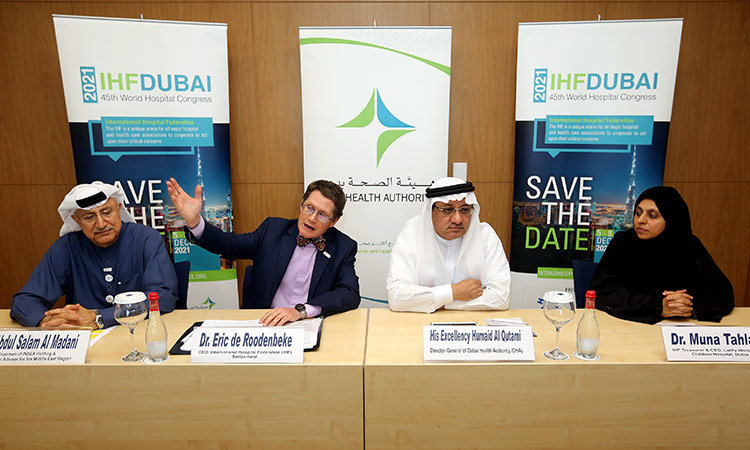 The officials behind the 45th edition of the "World Hospital Congress 2021" in Dubai at the press conference on Tuesday.

IHF is the “unique arena for all major hospitals and healthcare associations (recognized by governments) such as the Philippine Hospital Association to cooperate to act upon their critical concerns,” said IHF-Switzerland chief executive officer Dr. Eric de Roodenbeke.

De Roodenbeke was among the panelists at the Tuesday press conference for the announcement of Dubai, hosting for the second time, since several years back, the “World Hospital Congress 2021.”

The congress is supported by the Dubai Health Authority (DHA).

On the sidelines of the “Arab Health 2020” at the Dubai World Trade Center, DHA director general Humaid Al Qutami said: “Dubai’s hosting of such a global event reflects not only the status of this global city, but rather its tremendous potentials and capabilities to embrace such medical scientific congresses.”

Congress theme is “Achieving Sustainability and How Should We Look in 2030.”

On this note, Gulf Today asked for how closely coordinated are the IHF members on dealing with emergency situations amidst prevailing disturbances of all sorts arising across the world, de Roodenbeke said: “We are an open platform. Anyone can access to our website on how hospitals manage situations.”

Pursued on the sidelines, de Roodenbeke said that what is more important is that in any situation such as accidents and outbreaks, the daily medical functions of hospitals like attending to maternal births and elderly needs are neither disrupted nor neglected.

Sadly, he said, that based on global health concerns such as the 2015 to 2016 Ebola Crisis in West Africa, due to several factors, impacting on the health systems in that particular region, “the hospitals at that time became too focused on the Ebola and missed on their daily medical tasks.”

De Roodenbeke repeated what he had earlier told this reporter prior to the press conference that in every crisis situation such as the 2009 N1H1 (Swine Flu), IHF members are required to make a detailed report on how each of them have managed and resolved emergency situations “so that we learn from these.”