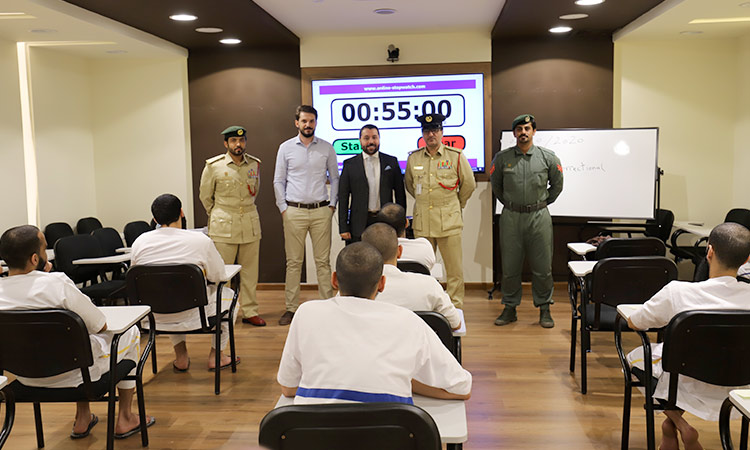 Inmates get instructions as they sit for Toefl.

This initiative, which was carried out in collaboration with the American University in the UAE, is under the directives of the Commander-in-Chief of Dubai Police, Major General Abdullah Khalifa Al Marri and the follow-up from Brigadier Marwan Abdul Karim Muhammad Abdul Karim Julfar, Acting Director of the Dubai Correctional and Punitive Establishments.

Brig. Julfar stressed that Dubai Police always seeks to provide inmates with all scientific and academic knowledge, rehabilitation programmes, and sports training to achieve the highest standards of excellence. “We always work to create an appropriate environment for the inmates to help them integrate into society after they serve their sentence periods” he said.

Major Mohammad Abdullah Al Obaidli, Acting Director of the Inmates’ Training and Education Programmes, pointed out that 23 female and male inmates have registered in university for the academic year 2020. He asserted that Dubai Police provides inmates with the appropriate atmosphere that enables them to study and learn.

Recently, Sharjah Police, represented by their Punitive and Correctional Establishment,  launched the “Vehicle of Hope,” in collaboration with Friends of Patients in Sharjah, to help transport elderly inmates and those with special needs to hospitals and treatment centres.

Brigadier Ahmed Shuhail, Director General of the Punitive and Correctional Establishment, graced the launch. The vehicle has special traits that provide the best services to its users.

He noted that adding this new service was an embodiment of the leadership’s vision of providing the best facilities to residents in the emirate and the strategic targets of the ministry that promote innovation and customer service.

He thanked the Friends of Patients in Sharjah and all strategic partners who helped develop this vital service.

In September last year, Sharjah Police launched e-Scooter patrols. They were aimed at enhancing security and safety, in addition to the satisfaction of the customers.

The team at the Community Police Department in Sharjah includes e-Scooter patrols.