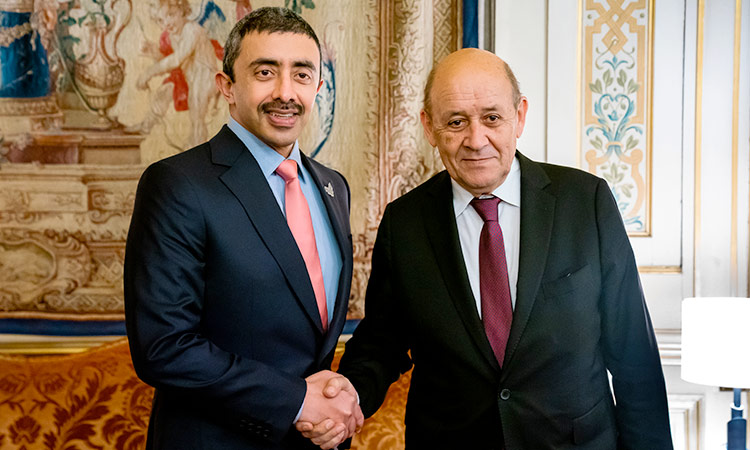 During the meeting, Sheikh Abdullah and Le Drian discussed ways to enhance the bilateral relations between the two countries and cooperation in all domains, especially in education, technology and culture.

They also reviewed the latest regional developments and issues of mutual interest, particularly the events in Libya, Iran and Sudan.

Sheikh Abdullah emphasised the strong strategic ties and keenness in developing them between the two sides as well as cooperation in various fields.

He also indicated that Sorbonne University Abu Dhabi and Louvre Abu Dhabi are role models in a partnership between the two countries that is not limited only to the political and economic aspects but also include the cultural, knowledge and scientific scenes. He added that these two scientific and cultural edifices are a symbol of intellectual and human convergence and a title of tolerance and coexistence.

The French Foreign Minister welcomed the visit of Sheikh Abdullah and his delegation and stressed the outstanding strategic ties and cooperation between the two countries in all domains.

On Saturday, Sheikh Abdullah bin Zayed, met in Brussels, with Josep Borrell, High Representative of the European Union, EU, for Foreign Affairs and Security Policy and Vice-President of the European Commission.

During the meeting, both sides discussed the joint cooperation between the UAE and the EU, especially regarding the Expo 2020 Dubai, which the UAE will host from October 2020 to April 2021.