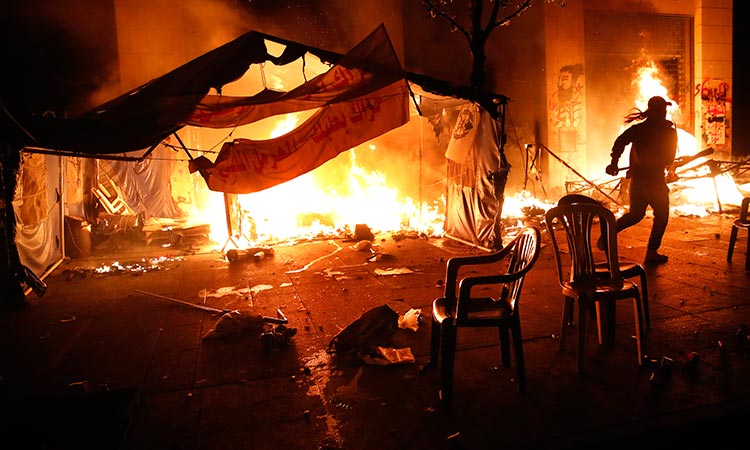 An anti-government protester tries to extinguish his tent reportedly set on fire by the parliament guards in Beirut. Hussein Malla/AP

Medics said 145 people were wounded in the latest clashes, taking the casualty toll to more than 530 in two days.

Thick clouds of white tear gas billowed in central Beirut, as police pushed protesters out of a flashpoint road near parliament after hours of clashes, before the downpour largely cleared the streets.

Unprecedented protests have rocked the country since October 17, with citizens from all religious backgrounds demanding the ouster of a political class viewed as inept, corrupt and responsible for an ever-deepening economic crisis.

For a second night in a row, dozens of people started lobbing stones at police behind a metal barricade blocking a road to parliament, crying "revolution, revolution".

More than 120 of those were treated in hospitals, including a protester who sustained an eye injury, as well as security force members. Lebanon's Internal Security Forces said 142 of its members were injured, including 7 officers, some with serious concussions.

Lebanon's public prosecutor ordered on Sunday the release of 34 people detained in clashes between security forces and anti-government protesters.

The public prosecutor said all those detained during the riots would be released except those with other pending cases, the official National State News agency reported.

The clashes took place amid a rapidly worsening financial crisis and an ongoing impasse over the formation of a new government.

On the quiet, rainy streets on Sunday, shopkeepers, banks and other businesses swept up broken glass and boarded up windows.

Workers at one bank took down the large sign with its name to remove any identifier and avoid soliciting anger from protesters, who smashed the windows and the facade of Lebanon's Banking Association headquarters with metal bars the previous night. 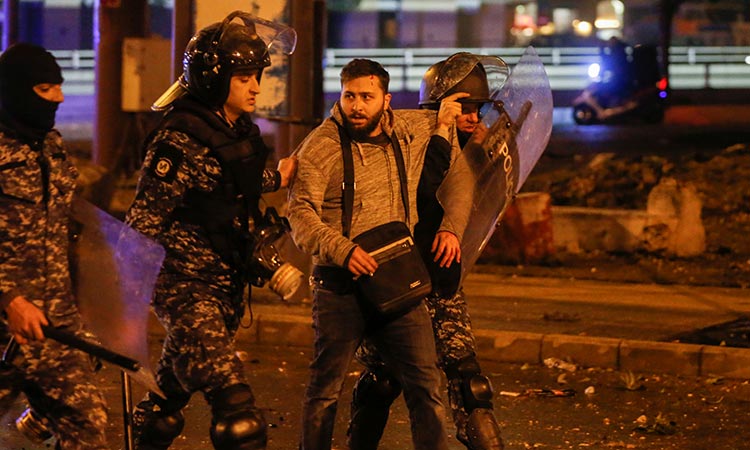 Riot police restrain a protester during a protest in Beirut, Lebanon. Mohamed Azakir/Reuters

Nearby soot and ashes still littered the ground where security forces burned the tents of the protesters' sit-in during the chaotic melee.

Riot police had fired volleys of tear gas and rubber bullets late into the night Saturday to disperse the thousands of demonstrators. The protesters, who came from the country's north, east and the capital itself, clubbed security forces with tree branches and metal bars and fired flares and fireworks, while lobbing stones and other projectiles at them.

The clashes also took place on the steps of a mosque downtown. The top Sunni Fatwa office called it "inappropriate” and said protesters had taken refuge inside the mosque and were taken care of.

The pitched street battles lasted for nearly nine hours, with both protesters and the government trading blame for the violence. 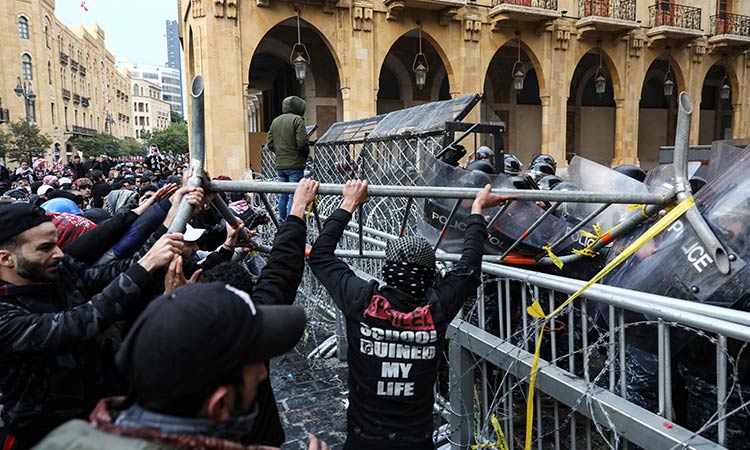 "But for the protests to turn into a blatant attack on the security forces, public and private properties, this is condemned and totally unacceptable," she tweeted on Saturday.

However, Human Rights Watch (HRW) described the security force response as "brutal" and called for an urgent end to a "culture of impunity” for police abuse.

"There was no justification for the brutal use of force unleashed by Lebanon’s riot police against largely peaceful demonstrators in downtown Beirut," said Michael Page, deputy Middle East director at HRW.

"A direct and violent confrontation is taking place with anti-riot police at one of the entrances to parliament," the Internal Security Forces said earlier on Twitter.

"We ask peaceful protesters to keep away from the site of the rioting for their safety."

They published photos of several wounded policemen and a video showing pillars stripped of their tiles, reportedly to be thrown at security forces. 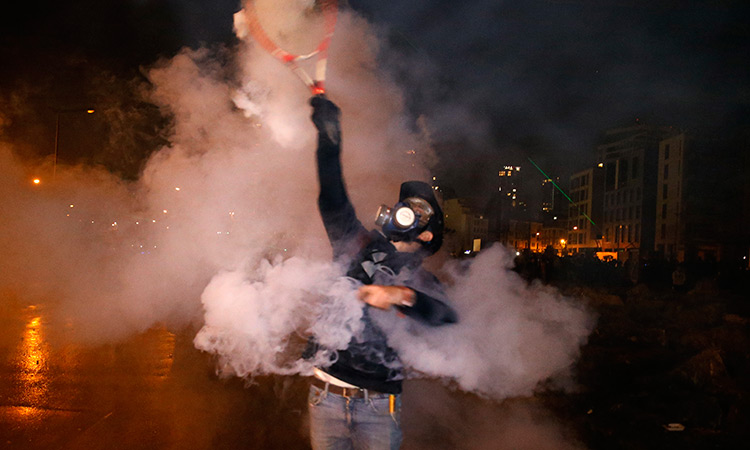 An anti-government demonstrator throws back tear gas at riot policemen with a tennis racket, in Beirut, Lebanon. AP

An AFP photographer saw young men uproot parking meters at the start of the clashes, then around 10 people faint from tear gas inhalation.

A 23-year-old woman named Maya said she was protesting because politicians seemed to be ignoring demands for an overhaul of the old political class.

"I'm here because after more than 90 days in the streets, they're still squabbling over their shares in government... It's as if they didn't see our movement," she told the media.

"Popular anger is the solution," she said.

Forming a cabinet is an often convoluted process in Lebanon, where a complex system seeks to maintain balance between the country's many political parties and religious confessions.

But protesters say they want to scrap the old system, and demand a new government of impartial technocrats to address mounting economic woes, including a severe liquidity crisis. 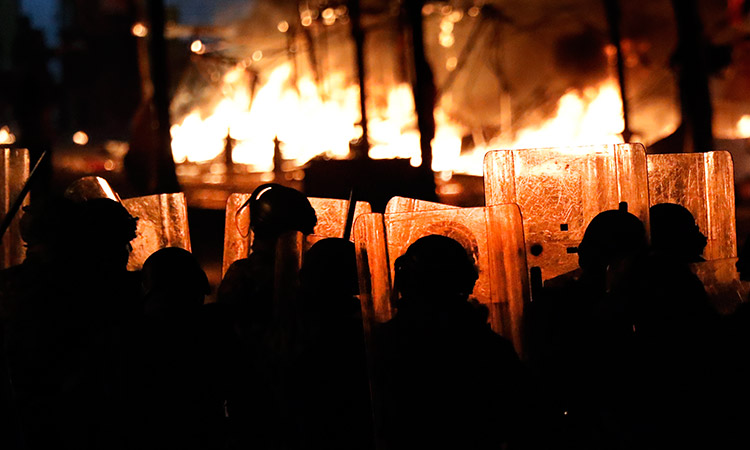 This week public anger has been directed at banks, with branches in the capital's Hamra district vandalised following widely unpopular limits on withdrawals and transfers.

Dozens were detained for several nights after clashes on Tuesday and Wednesday, before being released.

Human rights groups condemned the arrests and what they described as unacceptable violence against largely peaceful protesters.

Hariri and his government stepped down under pressure from the street on October 29, but they have remained in a caretaker capacity until a new cabinet is formed. 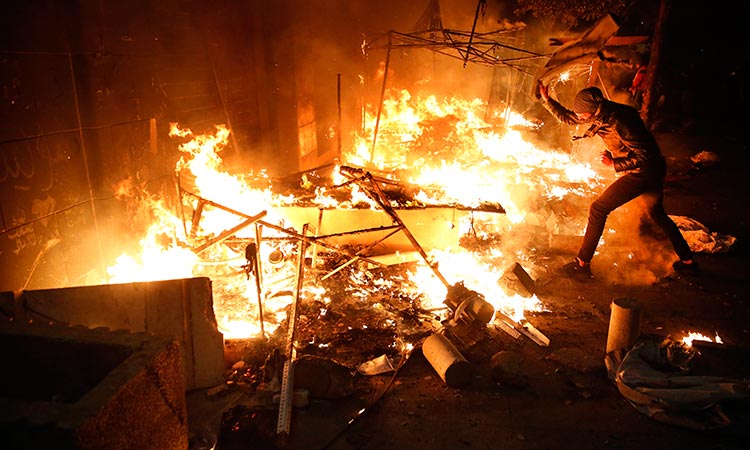 An anti-government protester tries to extinguish a tent, which was set on fire during ongoing protests in Beirut. AP

Political factions that agreed on December 19 to appoint former education minister and professor Hassan Diab as the new premier are now disagreeing over proposed ministers.

The World Bank has warned that the poverty rate in Lebanon could rise from a third to half of the population if the political crisis is not solved soon. 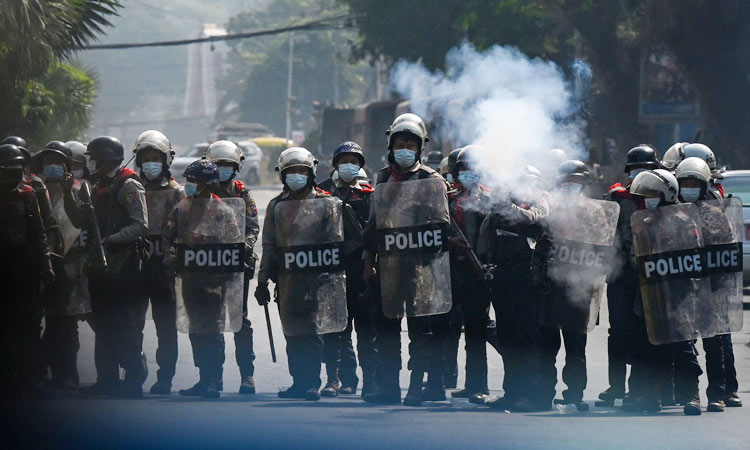