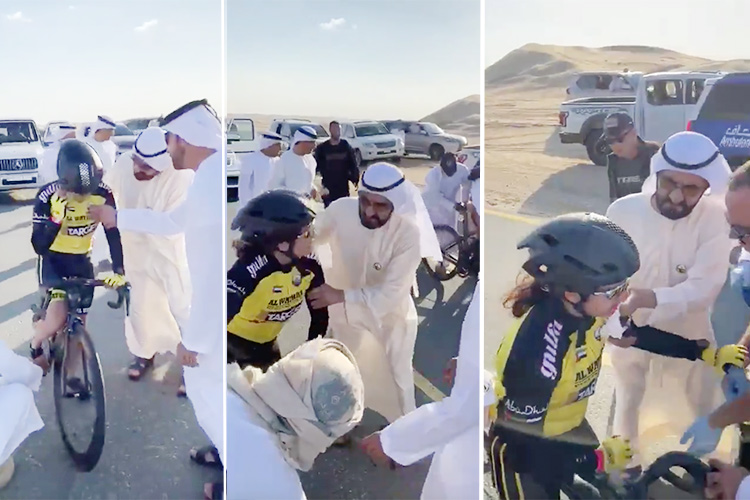 On a number of occasions, Sheikh Mohammed has amazed the citizens with his heart-touching efforts.

This time it was a female cyclist who got the surprise of her life when she fell from her bike and it was none other than the Dubai Ruler healing her wounds with his handkerchief.

Incident happened when Annan Al Amri, from the Al-Wathba team fell off her bike while participating in the Peace Cycling Championships.

Sheikh Mohammed is known for his humility and hands down approach.

Hamdan post a lovely video of Sheikh Mohammed with children

In March 17, 2018, A Mexican tourist along with her friends was off-roading in the deserts of Dubai.

The tourists’ joyride turned unpleasant when their vehicle got stuck in the sand.

New to the country and with limited knowledge of the situation, the tourists started to panic. 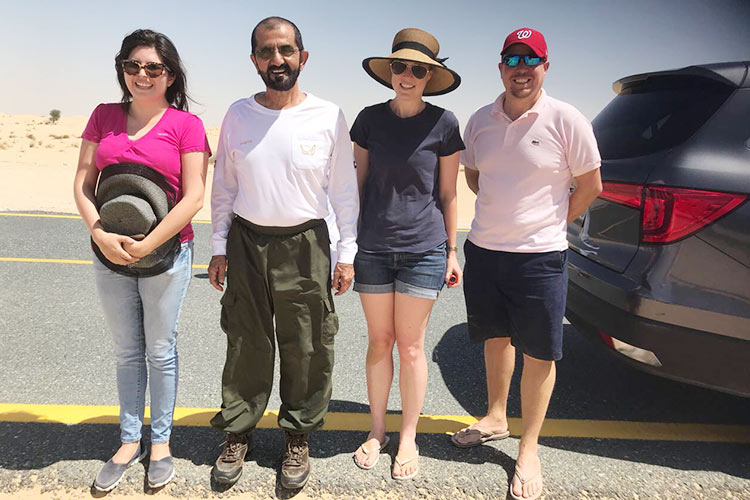 Sheikh Mohammed poses for a photograph after rescuing the tourists in March 2018.

But as their luck would have it, the tourist, identified as Hanna Karen Arroyo, had a surprising encounter with their saviour, none other than the Sheikh Mohammed Bin Rashid.

Sheikh Mohammed was passing by in his Mercedes jeep when he saw the panic-stricken tourists.

The Dubai Ruler pulled over and rescued the tourists. Another example of how in the UAE, the Royals are themselves involved in solving people’s problems on ground.

Hanna took to the micro-blogging site, Twitter, saying, “My friend and I got stuck on the desert of Dubai and we got rescued by HH Sheikh Mohammed Bin Rashid.”

Hanna Karen shared two photos of the incident, which show her and her friends posing with the Dubai Ruler.

She also shared a picture where an Emirati boy is seen handling the towing rope.

Gulf Today reached Hanna for more details but she was unavailable.

The story has been widely shared on social media platforms.